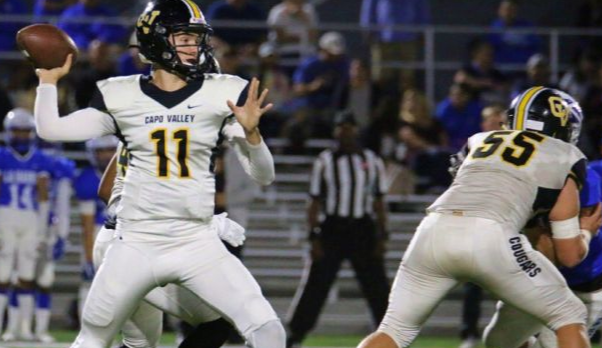 The 2019 season was a big one for Class of 2021 California quarterback Dartanyon Moussiaux in more ways than one. After transferring from JSerra Catholic, Moussiaux had the task of gelling with his new Capistrano Valley High School squad taking on a challenging South Coast League schedule. Moussiaux rose to the occasion during his first season starting at the varsity level passing for 2,143 yards with 20 touchdowns chipping in a rushing score leading his team to the playoffs. The 6-5, 192-pound, field general earned first team All-Conference honors for his play on the field and is now ready to showcase those skills at national and collegiate camps throughout the offseason.

In an RNG exclusive interview partnered with QB Hit List, I sat down with the three-star prospect going in-depth on his play with the Cougars and his offseason goals.

Dartanyon, before we get into the nitty-gritty parts of your game and the 2019 season, I have to ask you about that 94-yard touchdown pass. You were standing in your own end zone and nailed the receiver across the middle. Take me through the play.

“They had just scored. We got the kickoff, returned it to their 15, and then got two penalties back-to-back. The fans were getting anxious – you could feel it. The called play, there was a wheel route and a post. I knew I was getting pressure, that was the best defensive line Mission Viejo has had in a while. I dropped it between the safety and linebacker and Jack Haley snagged it. That was one of the coolest moments of the whole season.”

How did that feel getting that score up on the board?

“It felt great. It was 14-0 before that play; we had to do something. If we did nothing, they were going to start putting us away. It was a cool feeling, it was awesome.”

There is so much to ask you about, the next thing I’d like to cover is your arm strength. You have a rifle.

How have you developed your arm strength over the years?

“Through training, lifting, and a bunch of arm strength training. I do bands, weights, bench press, and long toss. I go to the field to throw routes and I stand on the goal line and throw as far as I can.”

How far are you throwing the ball from the goal line?

What were some of the routes you were hitting within the Cougars’ Spread offense during the 2019 season?

“This year, in the quick game I was hitting 5-yard outs, slants, top routes, 10-yard outs, posts, corners, digs, and go. Whatever we could beat the defense with, I was throwing to this season.”

“That’s really it. I move around the pocket well. I want to increase my speed to run more this season. Because of my film study, I can tell what is coming. I know if that defensive lineman is going to use a rip or swim move trying to get to me. Knowing what is coming, I can buy a couple extra seconds to get the ball out.”

Do you call any audibles?

“I do call some audibles, but depends on where we are on the field. If the corners are playing off, I will call a hitch or a slant. If I see a hole in the defense that we can take advantage of I will call an audible.”

How did your overall game develop during the 2019 season?

“My decision making developed a lot this season. Throughout the season I was making better and quicker decisions. I was identifying defenses better and knowing when they are bringing pressure and where it was coming. I grew so much during the season. Week by week I was seeing more defensive styles and blitz coverages and learning how we will attack those types of defenses.”

There were some stouts teams on the schedule this past season. How did those games and challenges against the likes of Mission Viejo help your overall progression as a player?

“My confidence went up, especially after the Mission game. That Mission game helped. Going into the game, they are the big bad dog and I knew the guys on the team from growing up with them. I knew to do my best. We did well on offense, we played our butts off. I am proud of my brothers for that.”

What are you working on with your game this offseason?

The season you turned in had to catch some recruiting interest. Which schools are looking in on you?

“Cal, UCLA, Washington State, Texas Tech, and Mississippi State. There are a couple others I can think of right now.”

Over the offseason, are you planning on taking any unofficial visits?

“Yes. I am planning on visiting Mississippi State, Cal, UCLA, and LSU.”

That will be a lot of fun. Camp season is about to begin, are you going to compete at any camps this spring?

“I will compete at the Under Armour Regional and at the Polynesian camp.”

What’s the goal for you at the camps this spring?

Dartanyon, thanks for your time today and good luck at the upcoming camps.