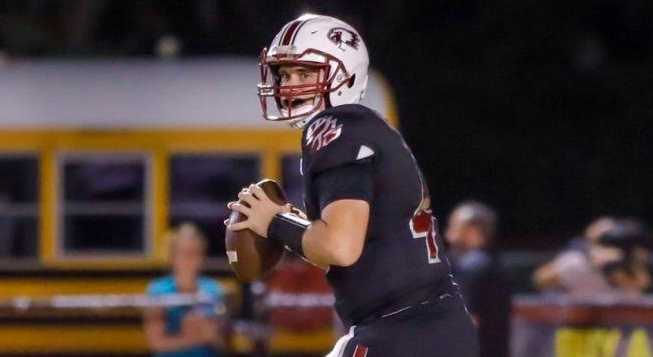 Class of 2021 quarterback Matt O’Dowd is a recruiting prospect to watch. The 6-2, 204-pound, quarterback can sling it, and the pigskin is a thing of beauty coming out of his hand. He spent the 2018 season as a backup at Florida powerhouse American Heritage appearing in five games throwing for 160 yards with two scores, but took on 8A Sunshine State competition at Stoneman Douglas during the 2019 campaign tossing for 1,397 yards with 15 touchdowns while rushing in four more scores. Word of O’Dowd’s growing talents and arm strength are starting to spread among the college ranks, especially among the Ivy League programs thanks to the three-star recruit’s 4.4 cumulative GPA and 1240 on the SAT.

In an RNG exclusive interview partnered with QB Hit List, I got to go inside the proverbial huddle with O’Dowd learning more about his game with an update on his recruiting trail activities.

Matt, Florida 8A football is filled with talent and athletes at every position. Given all the tough teams the Eagles play against, what is that like for you as a quarterback?

“I love playing the tough teams and against that type of competition. It makes me better and it makes the team better. We will be better this upcoming season for that challenge last season.”

You have to be up for each game and well-prepared, what is your weekly preparation for any given game?

“With our team, we lift during the season on Monday, Wednesday, and Thursday. We practice every day, we watch film, and have team meetings before we go on the field.”

The zip and touch you have on the ball appears effortless when you spin it out of your hands.

From a throwing perspective, what do you feel are the strengths to your game as a passer?

“I am an accurate passer with a strong arm; I pride myself on that. I have worked hard on being accurate with a strong arm. As a passer, I feel like I am really good at reading defenses. My first play on my highlight reel is a check; got him in stride. I push hard in practice so that we have perfect timing.”

How did your game show improvement during the 2019 run?

“I improved upon reading defenses, my pre-snap read, and my ability to run the read-option. I can hand it off or pull the ball and take it for 50-yards, which I did this season.”

It looks like the Eagles were in a lot of different sets including the Spread. What formations were you guys lining up in last season and what were some of the routes you were connecting on within the offense?

“We mainly read a Spread, four wide and one running back. We will throw more out of the Spread this year. We connected on posts, post curls, slants, and go-routes. Sometimes we have two backs in for a run on goal line or we will motion him out to the flats. Our OC likes to mess with defenses; he messes with their heads.”

In which game during the 2019 season did you turn in your top performance?

“My best performance was against Coral Springs; they are our rival school. They call it “The Pig Bowl” because the principals have to kiss a pig if their team loses. We won 42-19. I threw for 200 yards and four touchdowns; it was great because it was a rivalry game.”

This offseason, what have you been working on with your game?

“I have been working on my ability to read defenses. I want to keep improving on my pre-snap reads. I am already looking at teams we play this year, learning their coverages. I am also working on my throwing ability and technique trying to perfect my form. I am working on our RPO where the receiver bubbles out which gives me the option to throw it or run it. I am getting together with my receivers working on getting our chemistry down. Some guys are stepping up and I’m working with my returning guys for perfect chemistry.”

Going into recruiting, which schools are showing interest but have not offered yet?

“A few schools have come to see me, Rutgers, Pitt, and Louisiana (ULL). I have talked to Indiana and Yale this week. Brown and Harvard have been showing interest since the summer.”

From the start of the season to now, have you taken any unofficial visits?

“Yes. I took a visit to ULL, that went really well. They will be back in the spring to come see me throw.”

Nice. Are you going to any national camps this spring?

“I will be competing at Rivals, the Elite 11, and Under Armour.”

Any last words or things you want to cover before we wrap?

“I’d like to talk about my school; this is the best school I have ever been to. I love the staff, the school has great academics, and I love how hard we are working and preparing for the spring and the season.”

Matt, thanks for your time today and good luck at the upcoming camps.