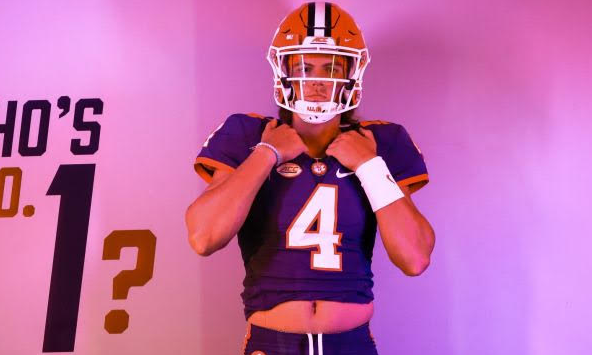 Class of 2021 quarterback Colten Gauthier was at it again during the 2019 season doing what he does best, picking apart opposing defenses. After a sophomore season with Hebron Christian Academy that included 2,088 yards in the air with 19 scores and 114 yards on the ground with four more touchdowns, the 6-3, 205-pound, field general took his squad to new heights finishing with an 8-5 record with a three-game run into the playoffs. Gauthier was on-point throwing for 2,401 yards with 20 scores going up on the board and toted the rock 60 times for 234 more yards adding another 10 touchdowns to the resume. For his efforts, 20 college football programs have dropped offers wanting him to continue the same punishment on secondaries at the next level.

In an RNG exclusive interview partnered with QB Hit List, I sat down with the four-star talent out of the Dacula area for an in-depth interview covering his recruiting opportunities and play on the field.

Colten, the Lions were a team full of grit throughout the 2019 season never giving up with a three-game run into the playoffs. Looking back on the season, what are you most proud of with how your team performed through the adversity faced?

“There were a lot of people that doubted us, but we beat Commerce for first time in 25 years (21-7). I admire the way we looked at our season. We knew we had a tough schedule but we took it and ran with it. We played together, and we had a shot in every game. We always fought in our own way. I am proud of us for fighting and working hard all season. This was the first time our school went three games into the playoffs; we had a history filled season.”

Before we get too deep into the Q&A, I want to talk about your arm strength. No doubt you can sling it as evident by that 50-yard pass in the air on your game tape. How have you built up that arm strength over time? Did you play baseball growing up?

“I did play baseball; I was a pitcher. I transferred before my sophomore year, my freshman year at Loganville. That school is known for baseball; they have won four state championships over the last four years. Growing up in that program, that helped me develop that strength, but the rest of it is natural. Growing up, I would go throw with my dad. In third grade, I was throwing an NFL football. I got in the weight room at a young age, that helped develop my arm strength. Working with my coaches helped too.”

The stats for you from your sophomore to junior season show big improvements. Which areas of your game took that next step on the field as a passing quarterback in 2019?

“My confidence grew a lot. My sophomore year, I was confident but not as comfortable. Everything was new to me; that was my first year playing varsity. After that year, you come out knowing what will happen. The biggest thing for me was watching film and learning tendencies. Knowing your progressions, that was a big shift up. My movement in the pocket improved a lot as well. My sophomore year, I sat in the pocket. I stepped up and moved around in the pocket this season.”

Which base offensive set are you guys running?

“We were an Air Raid offense, but we ran a little bit of everything. We did some play-action as well. If we had to pass 60 times or run it 60 times we would. Typically, we would establish the run first then do the play-action passes. That really started to open it up. We would run first and then pass.”

What are some of the routes you were throwing to during your junior year?

“After my sophomore year, our offensive coordinator left. We had a new one my junior year. The concepts got more difficult, but he is a great coach. I would throw a post if there was a high-level free safety or high-lows in the flat to a curl. If they push down on the flat, I’d go to the curl. We did a lot of slants with RPOs (run-pass option). I would ride it. If the linebacker comes up, I’d throw it behind his ear. If he sat, I’d hand it off. Those were some of the things that were different in the offense. With the routes, we did a lot of RPO slants and screens, digs and posts – things like that.”

How were defenses scheming against you in hopes of slowing you down?

All players face challenges and adversity during a given season. What was at least one challenge you faced in 2019 and how did you overcome that obstacle?

“Towards the end of the season, I tore my meniscus. To throw and push on it, it hurt, but I could not let that affect me. I had the mindset to push through it. I am proud of that. Other than that, I had a great season from a development standpoint. That was one of the things I had to overcome, the meniscus injury.”

With the game reps comes maturity and knowledge of the game. Where do you feel your understanding of both the offense and opposing defenses grew last season?

“Over the summer, the difference from the two years was the offense and my offensive coordinator. I would stay after going over concepts and protections with him. When school started, I would come before school to watch film from practice from the previous day and watch film of the team we were playing. That would help me going into the week. I knew what was ahead of us from all the film I watched.”

Going into recruiting. There are a lot of schools that like what you do on the field. How many offers do you have now?

Impressive. Which schools are showing interest but have not offered yet?

During the season, did you take any unofficial visits?

“I did. I went to Clemson for the Texas A&M game, I went to Missouri for the Florida game, and I went to South Carolina for the Kentucky game.”

Tell me about the Clemson visit.

“It went really well. I talked to Coach (Brandon) Streeter (RC/QB coach) before the game. I got there three hours early, hung out, ate food, and hung out with Coach Streeter for about an hour. That was really cool. They game was awesome. Clemson was a really good visit. I enjoyed it.”

And the South Carolina visit, how did that go?

“That went really well too. South Carolina was the same kind of deal as Clemson. I hung out with Coach (Dan) Werner who was their QB coach, Coach (Mike) Bobo is the offensive coordinator and QB coach now. I hung out with him before the game. I met with Coach (will) Muschamp (head coach) for about 20 minutes. We went to our seats for the game, and they beat Kentucky.”

Coming up, are there any planned visits on the schedule?

“Ole Miss is a planned visit. I would like to take that one as soon as possible. Tennessee is another I will visit soon; South Carolina too. Those three are the ones we have for now. Missouri, I will probably do that too. Those are the most likely ones.”

Back to football for the last question. What offseason goals have you set for yourself?

“Getting more flexible is one of my goals. That will help in every aspect – on the run, throwing from an uncomfortable platform. I want to get faster – I will run track to help with that. I am trying to get my school out of the way. I plan on enrolling early. I am doubling up on college classes to enroll early next year.”

Colten, I enjoyed covering ground with you today. Wishing you success with your offseason workouts and all the upcoming visits.