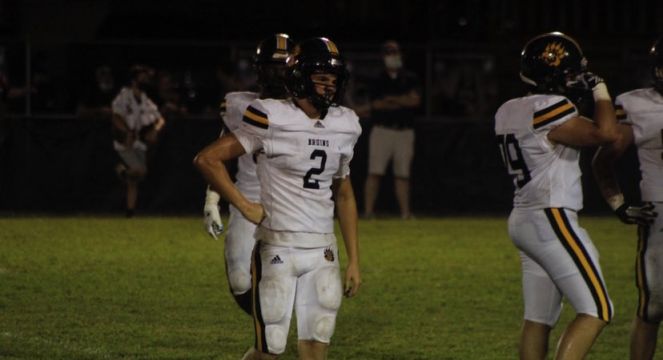 Far before freshmen were called up to the varsity level because seniors had early enrolled in college at winter break, Emile Picarella had earned his way onto the field taking on Mississippi varsity competition. Fall of 2020, during St. Joseph’s season, the Bruins’ coaching staff gave Picarella the keys to the offense seeing their rising star throw for 180 yards and two touchdowns in his first start against Richland. What is more impressive than his arm or his 6-2, 185-pound, frame, and developing abilities, Picarella is still just an eighth grader.

In an RNG first-look interview partnered with QB Hit List, Picarella takes us behind the scenes on his varsity experiences during the 2020 season.

Emile, how did the 2020 season go for you on the field with St. Joseph?

It went great, but it was cut short because of COVID.

During the 2020 season were you playing at the varsity level for the Bruins?

How many games did you play in and how many did you start?

I played in two and started two.

Wow. What style of offense were you running with the Bruins?

We were running a Spread.

What were some of the routes you were connecting on within the scheme?

I was throwing a lot of corners, a very good amount of outs, and go balls.

How do you prepare for each game?

I would always think of my motivation and where I come from. How I’d get ready during the week, I’d watch film and trust what I know.

How do you describe your style of play as a quarterback?

As a dual-threat that can throw to any part of the field and get away from anyone with my speed.

Let’s circle back to that first start. As an eighth grader taking the field against Mississippi varsity competition, what was that like for you?

It was crazy. It was an away game, and the crowd was wild. We did great. The loss was close, but we played well together as a group. People were yelling at us the whole game; it was a fun away game.

Did you have a “welcome to the varsity” moment last season? If so, what happened?

I did. Stepping up in the pocket, a big defensive lineman hit me in the chest and took me to the ground landing on top of me. (laughs) I could not breathe after that.

Getting those reps against much older players, more experienced players, how did your talents a QB grow?

By the end of the season, what did you feel were the strengths to your skills?

Some of my strengths are getting out of the pocket as it was collapsing and making a play where it seems like nothing will happen into a big play.

This offseason, what have you been working on preparing for next year?

Escaping, throwing on the run, and getting stronger.

How have you been expanding your knowledge of the game?

I watch film from last year. We are doing 7v7 this year; that gets filmed too. I look over the coverages seeing what I did wrong and right on my film.

Are there any national camps coming up you may attend?

Yes, sir. The Under Armour All-American Regional on March 20 in Atlanta.

That’ll be fun for you. Are there any college camps you may go compete at this summer?

Yes, I plan on going to camps at LSU, Ole Miss, and Mississippi State.

Yes, sir. I have Twitter follows from Oregon and Oklahoma. Oregon’s offensive coordinator, I talked to Joe Moorhead a couple of days ago.

Very cool. Emile, I appreciate your time today and wish you success with your workouts and upcoming camps until we talk again.