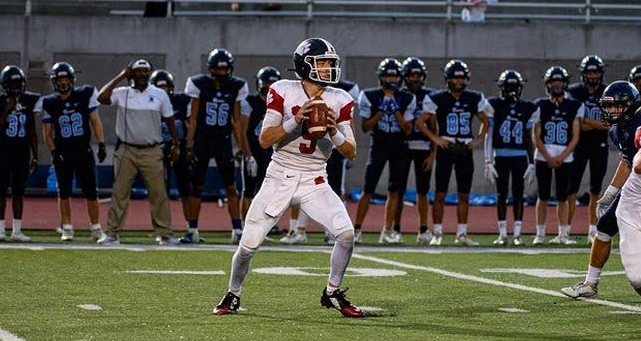 All high school football players wanting to take their skills to the next level have to continue to show progress in their overall game year to year. When scouts watch Class of 2021 quarterback Davis LeDoyen, they are seeing it. Not only does LeDoyen have the stats as a marker, but one can easily see all the technical work put the Dunwoody High School standout is putting into his game to become a three-star recruit.

Even in his own words LeDoyen admits, as a sophomore he was essentially going through the motions of being a quarterback for the Wildcats but was not doing all that was needed to be that take charge play-maker on the field he wanted to be. His 2018 campaign wrapped completing 97 of 182 passes for 1,289 yards with 10 touchdowns tossed. Then, during his junior campaign LeDoyen emerged a different caliber of player setting a Cobb County Georgia single-season record for completions connecting on 235 of 381 attempts for 2,708 yards with 19 scores posted while taking five rushing trips into the end zone. College coaches seeing the growth of talent in the 6-3, 215-pound, quarterback have started dropping offers. Akron, Bucknell, West Liberty, and Troy are among those that already see LeDoyen as the man who can deliver wins to their respective programs in the future.

In an RNG exclusive interview partnered with QB Hit List, LeDoyen sat down for an in-depth conversation giving insight to his play on the field and offseason workout goals.

Davis, the readers out there may not be familiar with all the talent game after game that is on the field for a 6A Georgia football game. What is it like colliding against all that talent each week?

“Personally, I love it. It is great to be able to say you are playing in Georgia and against legit Georgia talent. It is exciting succeeding against kids going to big time colleges. It fires me up. Being pretty good at it, it fires me up. It makes me want to bring on the challenge.”

How do you prepare for a given game during the season?

“My preparation, I work with Ron Veal, a QB coach, once a week – I go over film with him and with my coaches. Each night I watch film. I got through their first downs, then second downs, and third. Then I look for tendencies and practice against it each day. I try to maximize my energy in practice to lift my guys up. It is hard to get up for each practice, but I do my best to bring them up. On game day, I get in the zone. I listen to music, stay calm, and before the game I say a prayer with some of my teammates. I stay relaxed and do not show my emotion, angry or happy, I stay even keel.”

What style of offense were you running in 2019?

“We ran a Spread. In our region the defensive linemen are really good. Sometimes it is hard to run the football playing against schools with talent on the line like we see. We run slow screens and we like to air it out. I go through a lot of progressions.”

How does the offense fit your skillset?

“I love it. It is really good for me because it puts me in control at a low level compared to what I want to do in my future. It allows me to check to different calls and digest what the defense is doing. Some offenses are based off one guy and/or one defender, but we are wide open. I can use my athleticism and arm to make plays. Mentally, I have to be on top of things and break down what the defense is doing. We are not a one-man read scheme. You have to read and do your progressions. You have to be locked in to run our offense.”

You took your game to another level this past season throwing for over 2,700 yards with 19 touchdowns. Where did you show the most improvement in your game during your junior season?

“It is different for me than a lot of kids. I played travel baseball through the summer, that was my last summer to do so. I did not work with my QB coach until after my sophomore season; before then I was doing what my coaches were telling me in 2018. My junior year, I was bigger. The biggest thing, I was not playing QB, I was QB-ing. My footwork was night and day from my sophomore year and my throwing motion was much better. My football IQ and understanding of the game was better as were my drops and footwork.”

Is there an aspect of your game that may get overlooked?

“I’d say my movement in the pocket; that is one of my best things. Football now, there are a lot of athletes on the field. The QB can bail and run, but I have gotten better at moving in the pocket and keeping my eyes downfield trying to make plays. Taking hits is another thing. I can take hits, get up and on the next snap make another strong throw.”

Which areas of your game are you working on this offseason?

Are you competing at any camps this offseason?

“I know I am going to the Elite 11 tomorrow. I’m still figuring out the rest. I want to do a Rivals camp, The Opening, and some college camps. It depends on how my recruiting goes. If I find out I really like a place and they are all in on me, it might change. For now, it is up in the air.”

“Miami is probably the top one. Rice as well. Boston College’s coaches have contacted me and South Alabama as well. I’d love to go to those places as well to check them out.”

Have you started taking visits?

Davis, it was great learning more about you and your style of play on the field today. Thanks for your time and good luck with the upcoming camps.