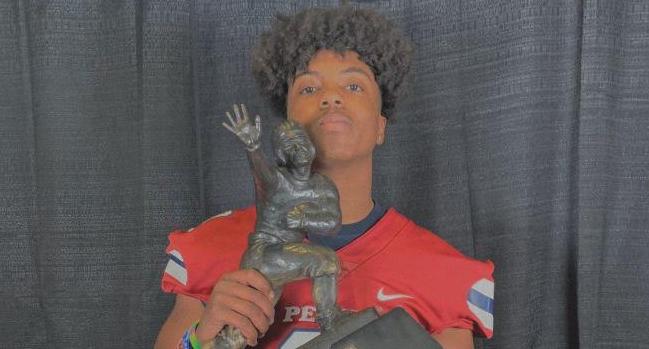 When the culmination of speed, arm, poise, and football IQ come together in the pocket for a quarterback, it is a magical thing to watch. Any quarterback in his groove with the ability to beat a team with his arm, legs, and knowledge is a nightmare for opposing defenses. That nightmare for 3A Pennsylvania teams during the 2019 season was Class of 2021 dual-threat Ameer Dudley.

There was a big push in Dudley’s game from his sophomore season to his junior campaign. In 2018, Dudley completed 73 of 155 passes for 1,018 yards with five touchdowns. That season, Central Valley posted a 5-6 record. Jump to the 2019 schedule after an offseason of diligent work, Dudley emerged as a three-star talent in control of his environment. The Warriors went 14-2 with their 6-2, 188-pound, field general connecting on 106 of 179 passes for 1,938 yards with 25 touchdowns tossed and rushed for 555 yards with nine more scores posted on the big board.

In an RNG exclusive interview partnered with QB Hit List, I sat down with one of Pennsylvania’s most electric players in the 2021 class covering ground on his skillset and recruiting opportunities.

Ameer, there is a confidence that you have in your talents and abilities on the field that is hard to come by. No matter the situation, you seem to have an answer and can make a play. Where does that psychological gift come from with your game?

“Honestly, it is from being younger and playing with the older kids. Playing against kids my age was not a challenge. One of my best friends growing up, he’s a sophomore at Duquesne now, I hung out with him all the time. He is like a big brother. When the older kids went outside to play football, my mom would make me play with them. Now, playing against kids my age is like playing against younger kids. They toughened me up when I was a kid. They would slam me, even when I was 8-years-old.”

There is another standout aspect to your game, and that is how quick you are in space. I’m guessing even rain gets frustrated trying to fall down to hit you but keeps missing because you are so quick with your side to side movements. How have you developed that movement and ability over time?

(Laughs) “I work out with my dad a lot. Working out with him helps a lot, he is a great trainer. He gets me right. I go to another local place to help with my flexibility as well.”

Sticking with your wheels, you have the ability to plant and go from anywhere on the field. How fast are you?

The offense you run with Central Valley is multi-faceted. What are some of the formations you guys are giving opposing defenses?

“We have our base. Our coach is really good, he could be an OC in college. He knows what defenses will do, and he works on what we are not good at in practice. If we are seeing a 4-3, he will make up new formations for us to exploit their defense. He will come up with new plays for a team we are facing. We run the new plays 50 times a day to get it down if we have to. Him having an offensive mindset and being that good, that helps us a lot. Our coach made a play up, something I had never heard of before. We were in trips left or right, or we have quads; he puts his own flare on everything. He will put the running back in at slot and the receiver in the backfield; he changes things around so the defense does not know what is coming.”

Within the offense, what were some of the routes you were throwing to when you were not improvising shuffle passes for touchdowns?

(Laughs) “My favorite is the post; I threw that a lot. I was throwing the fade, of course, and bench routes. I like the curl-wheel. With the quick stuff, improvised outs, and option routes to the running back, stuff like that.”

How would you describe your style of play within the schemes?

“I’m an improvisor who can make plays. That helps us a lot. I can audible out of something, or if something does not go right, I can extend the play and make it happen. I do that at a higher level than others.”

The stat line and win-loss column was a big change for you and the Warriors from 2018 to 2019; which areas of your game took a big step forward last season leading to the amazing season?

“I worked out a lot more. During my sophomore year, we did not have as much chemistry. We were friends, but we were not working out together as much. We realized how good we could be, and we saw that we had talent to win a state championship. We felt like we were obligated to go to the state championship. We had a lot of good players on that team.”

What are you working on this offseason?

Are there any camps on your schedule?

“Yeah. I am competing at the ESPN Top 300 in April. I am also going to the Elite 11 in April in DC, The Opening Regional, a Rivals camp and some college camps like Pitt. Will figure out the rest with college camps later on.”

Sticking with colleges. Which schools are showing interest?

“Right now, I am talking to Coastal Carolina, Penn State – talked to them a little bit, and Pitt.”

Have you visited any programs over the last few months?

“I went to Akron, Toledo, Lehigh, Pitt, and Penn (Pennsylvania).”

Are you visiting any schools coming up?

“Yes. I am going to West Virginia, supposed to go to Penn State on the 4th, Central Michigan on the 28th – they offered me and two of my friends; we are going together for their Junior Day. I am supposed to go to Buffalo on the 3rd, but I am not sure if I can make it. On April 11th, I am going to Cornell and then to Brown on April 18th – that might be when the ESPN camp is.”

Given your athletic talents, are you competing in any other sports with Central Valley?

“Basketball and I run track.”

Which track events are you competing in this year?

Ameer, thanks for your time today and good luck with all the college visits.