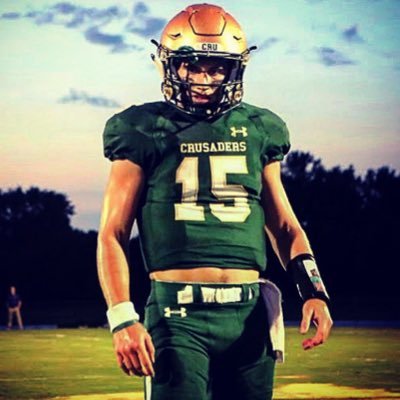 When Class of 2021 quarterback Colt Minson talks about studying the game of NFL gunslinger Drew Brees, everything falls into place. Much like Brees, Minson is that six-foot tall talent in the pocket slinging the ball around the yard nailing 15-to 20-yard out routes to the far side of the field, hitting 35- to 40-yard seam routes, and drops dimes over the shoulder of his receivers on posts like it is no big deal. In an abbreviated season due to weather cancellations, Minson dug in for 1,543 yards with 12 touchdowns completing 121 of 173 pass attempts for Bishop Sullivan Catholic leading the Crusaders to a 5-3 mark. With a year under his belt, three-star recruiting status, and two offers extended from Southern Miss and William and Mary, Minson is setting out to lead his Virginia Beach (VA) squad to a state title in 2019. With all the work put in coupled with the talent returning, Virginia teams are forewarned.

In an RNG exclusive interview partnered with QB Hit List, Minson and I got together for an in-depth talk going over all his skills on the field and impressive college camp circuit over the summer.

Colt, you were able to showcase your arm and accuracy within the Spread offense with the Crusaders last season. When your sophomore season was completed, what did you feel were the overall strengths to your game?

“I feel like my leadership abilities as a sophomore on a very talented team were showcased. We have had very successful quarterbacks at my school before me. I am not the biggest, the strongest, or the fastest, but I know how to lead a team. I can lead guys where they want to go to war with me. Like you said, my arm strength and accuracy his huge for me. Arm strength is important. My football IQ is a strength; knowing down and distance, what the defense is trying to do and how to attack them is a big part of it.”

Over the spring and summer months, what have you been working on with your technique in the pocket?

“I am always doing drills. I have travel around the country going to different camps and quarterback training events. I worked with Tony Ballard in Georgia and Coach Andy in Michigan this summer.”

How have you worked to grow your understanding of the game this offseason?

“By watching film. I watch every day. I watch film for an hour or two before I go to bed. I pick up on things most high school quarterbacks have no clue about.”

What kind of film are you watch?

“I am watching NFL and college ball. I also watch my film from last year; that helps me.”

With the work put into your game, where have you seen the biggest gains this summer?

“My game has improved with my speed and being bigger. I weighed 170 last year, I am up to 200 now. I am hitting the weights hard this offseason. I am stronger and smarter than last season. I am looking forward to this season.”

You mentioned going to camps, which camps did you attend this summer?

“I just finished up at William and Mary last week. That was great. They have a new staff there; I really like it up there. I went to Memphis; they really like me. I dominated there. I am on the board there. Wake Forest has been recruiting me hard; I have been talking to offensive coordinator. They are looking at me. I also camped at Liberty. That was awesome. I love the staff up there. I know things will really start clicking after my junior season with recruiting.”

You laid out some of the schools that are showing interest in you, which other programs are on that list?

“I am receiving interest from Wake Forest, they have shown a lot of interest, James Madison – I did not get to camp with them this year but I plan on doing so next year. I am talking to Coach Montgomery there. I did a Junior Day there, and I know Memphis really likes me.”

“I have two offers.”

With the camps, I know you visited some of the campuses. Which schools did you get to visit this offseason?

“I have taken visits to William and Mary, Liberty – they have really good facilities. They are an upcoming program especially with Hugh Freeze (head coach). I also visited Memphis and I have been to Wake Forest four or five times now.”

Are there any planned visits on the schedule for this fall?

“I will go to a Virginia Tech game this year. I want to get familiar with their staff. I also plan on visiting Liberty, Old Dominion, and James Madison. I will hit all the Virginia schools and go to a Wake Forest game.”

“We look great. We are in a coaching transition from Coach (Chris) Scott to Coach Tommy (Austin) from Greenbrier. Coach Austin has been great. We have bonded. We have some of the best talent in this state. I will stack my guys against any team. Our offensive line will be tough this season. We will put a lot of points on the board this season. It will be a good year.”

What are some of the ways you have built chemistry with your offensive unit over the offseason?

“7v7 is a huge thing. Most of the guys on my high school team play on the same 7v7 team. It works because we do not get off key. I am with those guys year-round. Weight training is another way we build chemistry as a team. We get in at 7:00 for a lift, have a break, and then from 12 o’clock to 8:00 we are practicing. We are doing two-a-days right now.”

“I have no personal goals; I just want to win a state championship. I want to have 30 passing touchdowns. I think that is manageable. I am excited for upcoming season, it will be awesome.”

You touched on this a few minutes ago, how would you describe your leadership style?

“I feel like my leadership is the best trait I have. Being a leader as a quarterback is one of the most important thing you can do. You have to have the guys around you wanting to fight for you. Drew Brees (New Orleans Saints) has that skill. I model my game on and off the field after him.”

Colt, it was great getting time in with you today. Wishing you and the team success this season on and off the field.