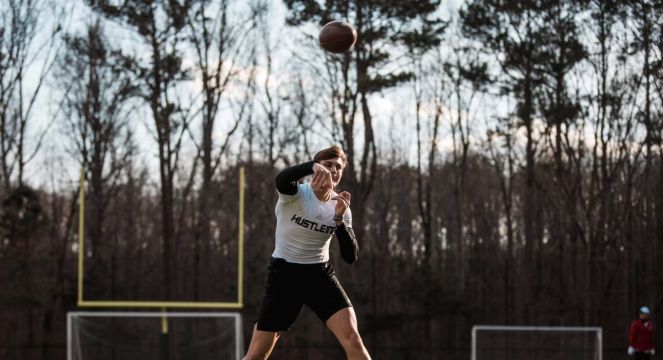 All competitors want to put their skills to the test, play against the best of the best. Any given Friday night on a Georgia 7A high school football field, all 22 on the field are going to see what they are made of. During the 2020 season, AJ Swann followed up on a breakthrough sophomore season leading Cherokee High School into the postseason again.

Swann ripped it and spun it in 2019 covering 2,399 yards with 20 touchdowns adding two rushing scores. With teams knowing what to expect from the 6-3, 200-pound, field general, he still lit up the opposition for 2,505 yards with 23 touchdowns during the Warriors 8-3 campaign. After earning co-Offensive 5-7A Regional Player of the Year honors, eight programs have dropped offers wanting Swann’s skills on their roster as part of the 2022 recruiting class.

In an RNG in-depth interview partnered with QB Hit List, Swann goes into detail on his big season in the Warriors’ pocket with a look at his growing recruiting options.

AJ, there are a lot of exciting elements to your game, but the one thing that speaks to me watching film on you is your competitiveness. How does that drive to win influence how you play and prepare for the game?

It makes me feel like I need to get everyone focused up, so they are better and I am better so we can win games.

During the season, going up against 7A Georgia squads had to be tough. What is your weekly preparation like including watching film?

Monday, Tuesday, and Thursday we workout at 7 a.m., then practice after school, and we watch film every day. On Wednesday morning at 6:30 to 8:45, we practice and then watch film after that.

What style of offense were you running in 2020?

We were balanced running the Spread. We like to spread it out and get our receivers in open space. When it is time, we like to pound it inside playing physical football.

How were defenses lining up against you?

Primarily Cover 3 and 2. The majority of time we were seeing Cover 3. There were three four fronts, but most of the time we were going against a 3-4.

My pre-snap reads. Me reading defensive backs and defensive linemen seeing their coverage and seeing the blitzer to give the offensive line their blocking.

In which game during the season did you have your best personal performance?

Why did you pick Milton? What did you do well in that game to make it your best?

I made a lot of the right reads, got a lot of yards, had three TDs, and I caught one in that game. We did not win, but I contributed. We have to get better as a team for next season.

While your game is growing and evolving, what was one challenge you faced during the 2020 season?

Ahead of the sixth or seventh game of our season, our offensive coordinator tested positive for the virus. I had to run the offense for that game. I had to be a bigger leader for my team and make the calls during the game.

How did facing that adversity make you a better leader and quarterback?

Usually, our offensive coordinator ran practices for the whole offense. I had to take over his part, and get everyone focused up and working on the things we needed to work.

Going into the offseason, what is your focus with your workouts?

The physical aspects, getting stronger and faster. I got a lot faster last offseason. I am building more muscle mass for my senior season, that is my main priority.

Over the offseason, are you going to any camps and/or playing 7v7 to keep the competitive fires burning?

I am not sure about camps, but I do train with my QB coach, Coach Ballard and I play 7v7 with Hustle Inc. They are a great program to be a part of.

Do you play any other sports for Cherokee?

I played basketball my sophomore year, but didn’t this year. I might play next year. Last year I played behind a four-star.

Let’s close talking recruiting. Which schools are showing interest but have not offered?

Temple is starting to show interest, Arkansas State is showing some interest, and Akron.

*Arkansas State offered after this interview was conducted

Which programs were the last couple to offer?

The last school was Maryland and before that it was USF.

When the dead period is over are there any visits you’d like to take?

Definitely. I want to see USF, Maryland, and FIU too. They have all offered. I want to check out their campuses. There are some others, but those three are the main ones because they offered me.

AJ, I appreciate your time today. Wishing you success this offseason with your workouts until we talk again.