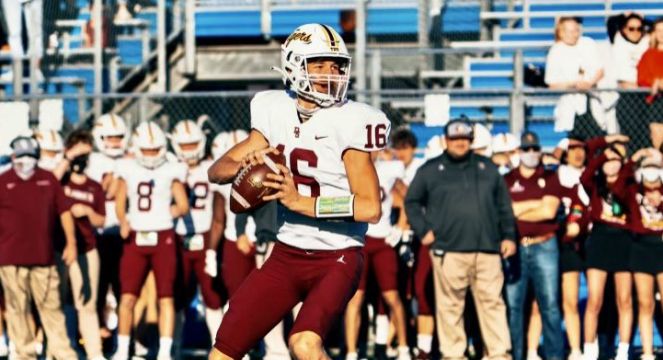 One of the best breakout performances of the year on the high school gridiron in 2020 for quarterbacks came out of Dripping Springs. The Tigers unleashed Class of 2023 gunslinger Austin Novosad, and he absolutely mauled 5A Texas defenses. Playing in nine games with eight starts, Novosad earned 5A District Newcomer of the Year after hitting 166 of 270 passes for 2,857 yards with 36 touchdowns while only throwing four interceptions. If the 317 passing yards per game average is any indication of the future, Novosad is going to own the state.

In an exclusive interview with the QB Hit List three-star standout, Novosad gives insight on his big season and his focus on taking his game to new heights over the winter and spring months with sights locked on the Elite 11 and Under Armour All-American Regionals.

Austin, you were putting on a show with your arm throughout the 2020 season. From your perspective, were you happy with your play on the field?

Yes, I was pretty happy. We had one standout receiver, Cameron O’Banan, who was a game changer for us. In every game, we threw for almost 250-plus; I was happy. There were some more pass-heavy games than others. In the playoffs, they tried to take away the pass, but we could pass or run it. We were right about 50-50 pass-run.

Looks like the offense was mixing it up here and there with formations and attacks. What were some of the sets you guys were executing?

We were a big Spread and RPO (run-pass) offense. We could run every play out of every formation, empty, trips, and quads. We’d change it up depending on the team we played. We could run one play 50 ways with our receivers getting to the same spot. That helped our passing game.

Which routes were your receivers running?

We mixed it up based on coverages if we had a zone read or man beater. Some of my favorites were deep posts over the top with a drag. The post-corner really worked this year. I like the corner-soft. We liked the comebacks. Those were my top routes this year.

When you were dropping back, what were some of the coverages you were seeing?

This year we got a little bit of everything. In district we saw the normal Cover 2 and 3 looks. One of our games was cancelled because of COVID. We picked up Mansfield Timberview (Arlington). That was my fourth game to play. It was a big game, and a good learning experience for me. They showed man, Cover 0. In the second round of the playoffs against Manvel, they played man in the red zone. We saw a little bit of everything.

Besides the big arm, you did a great job of moving in the pocket keeping your eyes downfield and making the play. What are some of the other strengths to your game that were showcased during the 2020 campaign?

My No. 1 strength is staying in the pocket, throwing on time, and taking the hit. If the pocket collapses, I am good at getting out, keeping my eyes downfield, and looking to pass before running. I am also good at being able to take advantage of out of place defenses. If they wanted to cheat on one receiver, we saw them try to take Cameron away, we’d attack a different area. Being able to recognize what the defense was trying to take away was a strength. I was making my progressions quicker finding the open man.

If you put it as your best game or not, I don’t know, but you had a 560-yard performance during the season. Walk us through the standout performance.

Yes, sir. That game was intense, and we had two guys out due to COVID. We didn’t know that game against Sequin was going to be like that. That was for the district championship. Both offenses were unstoppable. It was back and forth and it came down to key plays. That was one of our pass-heavy games. We took advantage of their defense scoring quickly throughout the game. The final score was 70-63. It was a high scoring game. We threw three posts in that game. We were able to go deep on them.

What are you working on with your skills this offseason?

This offseason I am getting faster, adding some weight, and getting stronger. With my mechanics and throwing wise, I am working on my quick game and working on my progressions to the check down. Speed and strength are the main things right now that I am working on.

How are you pushing your understanding of the game forward preparing for the 2021 season?

Right now, we are in meetings. All the QBs are going over the playbook. My goal is to take the offense, all our plays, and know what we are looking for on each play and the design of the play against the defense. I want to dive in and make sure I know all the coverages; each coverage, where you can attack, and being able to pick out weaknesses of coverages pre-snap and executing post-snap.

Are you going to any camps this spring or summer?

Yes, sir. I am going to the Elite 11 Regional and I was invited to the Under Armour All-American Regional in Dallas. Those are the two big ones I am looking forward to.

Are you going to any college camps?

Austin, thanks for your time today. Wishing you great success slinging the ball around at the Elite 11 and Under Armour Regionals.