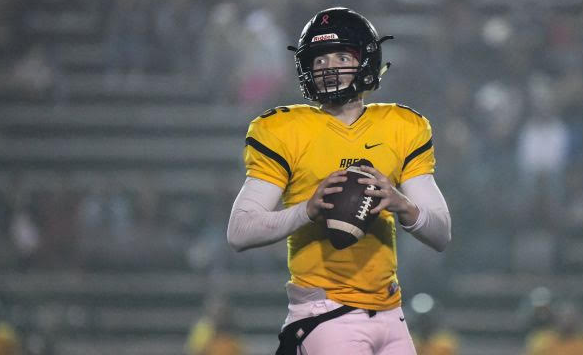 Since the 2017 season, Caden Filer has been piling it on opposing 3A Washington teams leading to respect from coaches on the other sidelines and jubilation knowing he is a graduating senior. Watching the trend, Filer was one of the hardest working dual-threats out there taking is game up a level each season culminating in a state semifinal playoff run in 2019 colliding against eventual champs Eastside Catholic. Now the question, where will the three-star recruit take his talents at the collegiate level?

As the foundations of a quarterback are laid by talented coaching staffs, this was the progression for Filer. During the 2017 season he completed 80 of 146 passes for 1,272 yards with 15 touchdowns and ran for 233 with three more scores posted. The following year, his responsibilities grew dropping back 275 times completing 169 with 2,893 yards covered with 35 scores going up on the board while keeping his dual-threat talent going with 339 rush yards and three touchdowns. The 10-3 record for the Abes was highlighted by a career season for the 6-3, 200-pound, quarterback nailing 271 of 380 attempts for 3,445 yards with 39 touchdowns tossed and 248 more yards covered on the ground and his annual three trips into the end zone.

Filer has all the key components next level coordinators look for in a quarterback, size, productivity, and a grasp for the nuances of the game. One can instantly tell Filer is well-schooled on what to do with the ball and he knows his coverages. If that is not enough, his arm is elite – 20-yard out routes to the opposite side of the field elite with a trail of smoke following the pigskin.

As it happens every year, there are certain very talented players being missed out on by college football programs, and Filer is one of them. He has two great offers from Puget Sound and Rocky Mountain, but has the talent that would suggest a 15-team option, if not more, ahead of National Signing Day.

In an RNG exclusive interview partnered with QB Hit List, I spent some time with perhaps Washington’s best kept secret in the 2020 class covering his skills on the field.

Caden, the Abes had a fantastic season pushing eventual state champs Eastside Catholic in the semifinal round of the playoffs. How did you help lead your team to that moment throughout the season?

“By keeping everyone accountable and keeping everyone on task throughout the season. We had never been that far in school history. We had to make sure everyone was doing what we needed to be successful. I was trying to be that leader, even helping guys with homework and in classes. I was making sure the receivers were running the routes correctly – everything mattered as we got further into the season.”

Watching you throw the ball is fun. Because of your arm strength you can do more than other quarterbacks with various off-platform throws. Throwing on the run, off-balance, or at a different arm angle, are those practiced events or something you come up with spur of the moment?

“Spur of the moment. I grew up playing backyard football messing around; I got good at it. Sometimes I make stuff happen when it is not there. I have practiced a few no look passes in practice for the fun of it.”

Looks like you guys ran a Spread this season. What were some of the routes on the tree you were connecting on within the offense in 2019?

“We like to throw to the wide side, to the opposite hash. We threw 18-yard comebacks, 15- to 20-yard outs, and deep corners to stretch the defense. Not a lot of teams play teams with a QB with that arm strength. Our offensive coordinator wanted to take advantage of that. We ran quick game routes as well – slants, fade out concepts, and stick concepts which we connected on a lot.”

Another great aspect to your game, it does not take long watching you to see you know your leverages, coverages, and you anticipate your throws. What was a weekly game preparation like for you to get to that point?

“It was a lot of offseason work and focusing on learning my coverages and how to attack defenses. During the season, by watching film I was able to see their coverages and learn what they may run. When I saw it on the field, I knew exactly what to do. I knew if I needed to go to the backside immediately or flip the play depending on the coverage. Trusting my guys and having that timing down is helpful too. There have been a lot of days with these guys over the years, before school and after practice, working on our timing so I knew where they would be.”

“During my sophomore year, they relied on me running a lot. During my junior year I was throwing more and during my senior year I did more of both. They would let me take off sometimes. After all the work, training, and speed development, I started running past guys and I started jumping over guys; that was fun. When teams dropped eight, I could run on them for 40-yards if they did not respect me.”

If you will, tell me how the other aspects of your game as a quarterback improved overall.

“I watch Drew Brees (New Orleans Saints) a lot. Studying how he goes through everything in the game, he wants to know what will happen before it happens; I try to do that. All the work put in I was able to do that. By the end of the season I knew what was going to happen before it happened. I think that is why we went so far. I had a 71.3 career-high completion percentage this season. Throughout my years playing football, I have understood defenses better and better with experience instead of seeing it or learning it on a notebook.”

Getting ready for our interview, I saw that you have offers from Puget Sound and Rocky Mountain.

Which schools are showing interest as we near National Signing Day?

During the season to now, have you taken any unofficial or official visits?

“I took game day visits to Wazzu and Oregon during my junior year. I went on visits to Hawaii and Cal during the offseason. During our season, I was focused on our team and did not take any visits.”

Understandable. Are you playing any other varsity sports for Lincoln?

Aside from your track workouts, what other parts of your game are you going to focus on this offseason before taking off for college?

“I will work on getting ready for college; that is a faster level. I have to understand everything even more. I will focus on learning coverages, my throwing technique, training and getting bigger and faster. I have been doing everything I need to do, now I have to pick it up a level.”

Caden, it was great getting time in with you today breaking down the different parts of your game. Wishing you the best of luck with the recruiting process going forward.