SIZE:
Sammy has very good size for a 2021 QB at 6’2” 175 lbs. He throws the ball with a high release point, giving more height on delivery. Works well in the pocket with good agility for greater visibility. A tall lengthy QB who'll be able to add bulk to his frame.
ACCURACY:
His throws are in-line with his receivers routes with good ball placement. Good anticipation of his receivers routes Very consistent whether in the pocket or on the go. Threw for a 61% completion rate this past season.
ARM STRENGTH:
With his size, comes a strong delivery including increased momentum and velocity. His vertical game is solid, able to stretch the field with deep passes over the secondary.
RELEASE:
Sammy has an over the top delivery with a fully extended arm motion from way back. Fully energized release. He does a nice job adjusting the angle of his delivery when space around him is limited.
THROW ON RUN:
Displays very good athleticism while getting to the outside. Able to square up with his receivers, while hitting his targets on the go. Strong forward momentum on his delivery.
FOOTWORK:
He’s a long stride running QB who can pick up yards in a hurry. Shows good mobility and balance while on the run. Runs a 4.86/40.
POISE:
Does a great job leading his offensive unit. He's very aggressive, attacking the defense with darts over the middle and flares over coverage. Follows through on play execution.

RT @jason_tjackson: Extremely blessed and excited to have receive my first offer from the University of Eastern Kentucky🖤🙏🏽@Trent_Steelman…

@WillHewlett Thanks coach, couldn’t have done it without you!

@JacobDennie Thank you my guy! 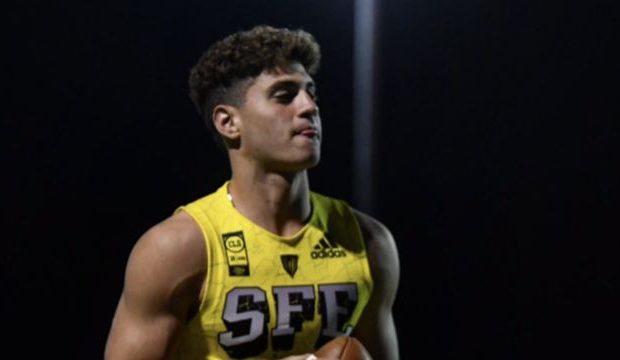 RT @QBHitList: QB's, join the largest QB fraternity in the nation...@QBHitList We have over 8,000 QB profiles for college coaches to view!…