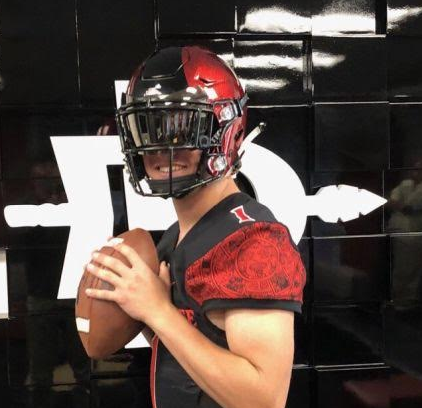 The 2018 season was an explosive one for Class of 2020 quarterback Carl Richardson. The 6-4, 205-pound, gun slinger stood tall in the Salinas High School pocket connecting on 269 of 366 passes for 3,606 yards with 24 touchdowns tossed. Expanding his game out even more, he carried the pigskin 53 times for another 598 yards with one score earning All-State, first team All-League, and team Offensive MVP honors for his work. Off the field, five offers have been dropped with programs across the country showing interest in Richardson’s talents. With even more hard work poured into his game this offseason, an improved Richardson is ready to light up California defenses again in 2019. All sets up for a fun season for the Cowboys and a busy one for college scouts keeping track.

In an RNG exclusive interview partnered with QB Hit List, I sat down with the three-star recruit to learn more about his abilities on the field and his recruiting possibilities off the gridiron.

Carl, the 2018 season was a breakout year for you slicing California defenses for over 3,600 yards with 24 touchdowns. What was clicking for you during the season allowing you to be so productive?

“I think I had great chemistry with my receivers. We were throwing all offseason, for nine months. With that chemistry came a lot of anticipation. I was able to throw it before they broke and I had a great offensive line allowing me time to deliver the ball. Our offensive coordinator called great games.”

What type of offense do you run with the Cowboys?

“We run a Spread-Pistol, 2-by 2 base offense. We run a lot of inside zone run scheme with RPO (run-pass option) off that. Our pass game philosophy is the quick game. Get them to bite and throw it past them deep. We have some five-step drop pass concepts as well.”

After spring ball, are you guys adding any new wrinkles to the offensive set?

“Yes. We are building off that. We are adding a tight end to our packages. Our coach does a great job of using personnel. We have guys that can do that, so we are adding 11-personnel. I am fired up about that.”

One of the key attributes for a quarterback is accuracy – and you throw darts into windows. How did that aspect of your game develop last season?

“A great QB needs to complete passes to win games and has to move the ball downfield. Having a 74 percent completion percentage was one of my strongest traits last season. I was on time and accurately delivering passes. I attribute that to my receivers and the work we put in during the offseason.”

Nice transition to my next question. I have to mention your receivers. They are coached up and do a great job of catching the ball with tight coverage and with their hands getting the ball out front. You show a lot of trust and belief in them, how did that chemistry come together?

“Two of my receivers and I joined Man Up, a 7v7 team, last offseason. We developed some real chemistry doing that. Also, working with the other guys nearly every day helped improve our chemistry. We were throwing routes on air, 7v7, and one-on-ones. I built a lot of chemistry with those guys.”

“Being able to use my athleticism adds a dimension to our offense. I have gained 15 pounds since last season, I am 205 now. I am planning on being at 210 to start the season. That will be a trait that I can build off of. I am working on exploding off drop backs and going for five or seven yards or more with my runs. I am looking forward to putting that to work. With the inside zone and read option, I can make a play with my legs off the defensive end. I am going to have a great time this season running those plays.”

What were some of the other key areas of your game that really shinned during your junior season that we have not already talked about to this point?

“I feel like my strongest trait is my leadership. I like building friendships and personal connections before coaching them up. I am working with my offensive coordinator from my 7v7 team on quickening up my release. My release is dramatically quicker and my velocity and accuracy is better than ever. I am excited to show what I have improved on this offseason. In addition to working on my leadership, this offseason I have been working on my mechanics with phenomenal results. During the season, my toughness is another strength. I am gritty player and I am not afraid of a hit for extra yards. In the fourth quarter, that is an advantage I bring to the table.”

At this point in your high school career, what do you feel are the overall strengths to your game?

“I feel like my biggest strength is my mental preparation. I am tough and a great leader; that does not always show up on film. Mentally is where I get my advantage over the physical. I can read defenses, throw with anticipation, and I never back down. I watch at least five hours of film each week to prepare for each team.”

How did the 7v7 season go this year?

“We won three tournaments, had a blast working with those guys. We practiced in the Bay area at Diablo College. That is a three hour drive up, but it was worth the drive up. LI was lucky enough to find Matt Gutierrez and work with him on my throwing motion.”

Moving to camps. Which camps have you attended so far this offseason?

“I have been to the Opening/Elite 11 Regional in Oakland in May. I had a blast. I was place in the top group. I was matching throw for throw with everyone there. I had a great time competing there.”

“I am going to Cal on Saturday, Stanford on the 18th, and Utah on the 19th. I am planning on hitting some Ivy League camps in July. They have a group of camps the 9th through the 13th. I might attend a USC camp as well.”

I imagine you have a lot of schools showing recruiting interest in you. Which ones have reached out?

Wow. How many offers do you have?

Which schools have you visited thus far?

How did the Washington State visit turn out?

“It was awesome. I was there for a spring practice. I met Coach (Mike) Leach (head coach). We talked for about 25 minutes. I watched film with their quarterback coach. It was a great experience up there. They won 11 games this past season and have had a ton of success with quarterbacks. I had a great time in Pullman.”

And the SDSU visit, how did that go?

“That was another great visit. Coach (Doug) Deakin, he is their special teams coach, watched me throw for him this spring in practice. After that, they wanted me down for a visit. During the visit, Coach (Jeff) Horton (OC) and Coach (Blake) Morgan (QB) had me sit down with them. They seem very interested. I had a great time.”

What planned visits are coming up?
“I am planning on visiting some Ivy League schools June 7th through the 8th; Princeton, Yale, and Columbia. I am excited to check them out.”

When you talk to college coaches, what are they telling you they like about your skillset?

“The coaches that have watched me throw tell me they like my quick release from over last season, my increased velocity, the way I work with my receivers, and my leadership. That is what they mention.”

Do you play any other varsity sports?

“Yes. I play basketball. I am the point guard on offense and the center on defense. I also ran track in 2018.”

Have you taken the ACT and/or SAT yet?

Impressive. My last question, and this maybe old hat for you. But with your older brother Jack playing for Stanford, how has that helped your understanding of the game, not only as a high school player but looking ahead as a collegiate talent?

“That is a great resource for me. We have a grease board in the living room that we use to draw plays and go over defenses. We watch film and we throw when he comes home. We work at it a ton. He is great to talk about coverages and to know what he is looking at on each play. He has been in my position; he can give great advice. We talk every day. I would not want anyone else for a big brother.

“It is also worth mentioning, my mom was all American hitter on the 1987 Stanford volleyball team. She was an All-American first team in 1987. My dad was an inside linebacker at Stanford from 1984-89. He had 289 career tackles. I grew up in a competitive household and that carries over into football.”

Carl, I had a lot of fun conducting the interview today. I wish you success with the upcoming camps and visits.