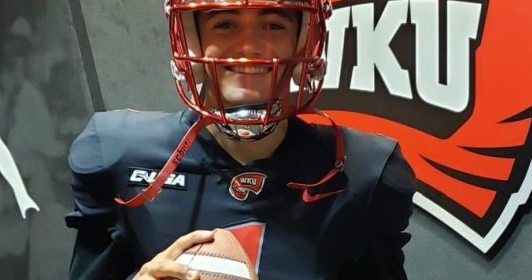 If anything was made clear during the 2018 high school football season in the Lone Star State, it was C 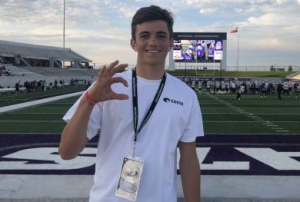 lass of 2020 quarterback Austin “Kade” Renfro can sling the pigskin with the best of them. The 6-3.5, 195-pound, quarterback was on point during his junior campaign completing 64 percent of his passes covering 1,840 yards with 17 touchdowns against 4A competition in just seven games. After showing off the arm strength, mobility, and precision in his game, the rising pride of Stephenville High School took home first team All-District, first team FCA, first team District Academic, and honorable mention Big Country honors. Off the field, college coaches across the country are learning of Renfro’s talents with six offers extended and a growing list of top programs taking a closer look.

In an RNG exclusive interview partnered with QB Hit List, I sat down for an exclusive one-on-one interview with the Yellow Jackets three-star recruit.

Austin, the 2018 season was a big one for you directing the Yellow Jackets offense. Overall, how did the season go for you personally?

“It went really well. The first part of the season I sat out due to an injury with my growth plates, I am still growing. I played the last seven games of the season, it went well.”

Taking over for Easton Jones was no small task. How did you prepare for your junior season?

“I went in there with the mindset to be the leader with our quarterback leaving. My focus was to support my teammates, not do too much, help the guys to do better, and rely on them as well.”

How do feel your game improved throughout the 2018 schedule?

“I feel like my biggest improvement was the experience gained. Varsity football is faster than JV and freshman ball. I was not able to play varsity football my sophomore year due to UIL rules. I focused on reading the defense and the rotations of the defense to find the open holes. I improved on getting the ball out in the hole to my receivers, not waiting from them to get to the hole. I was reading high to low and out. It was an important season as a player for me.”

Was there a point in the season when everything started to click, the game started to slow down, and you felt in control of the game, the offense, and all that was taking place?

“Yes, sir. In my first start of the season. During the first series I was nervous, but I took a deep breath and realized I have been doing this my whole life. I know I can make any throw I need to make, and it translated on the field.”

What are the overall strengths to your game at this point in your career?

“I am head smart. I know the offense like the back of my hand, and I know the defenses. I have a really strong arm – I can make any throw on the field. I have the mental awareness to know where to make it as well.”

Which areas of your game have you been focused on this spring?

“This offseason, we had a new coach so I am getting the new plays down. I am also working on getting my footwork down and going under center. I am working on not using as much of my arm but more with my legs and having a more fluid motion.”

Where are you seeing the biggest improvements this offseason in your game from technique and form to the mental aspects of the game?

Have you gone to any camps this offseason?

“Yes, sir. I went to the Army All-American Combine in January (San Antonio), the regional camp in Dallas for the Nike Opening, and I went to the Elite 11 in Houston. I won MVP there for QBs at the Houston Elite 11.”

What did you do well at the Elite 11 to earn MVP honors?

Do you have any upcoming camps you may attend?

“Yes, sir. I am planning on attending the FBU Top Gun in South Carolina in July. For college camps, I know I am going to Baylor and Southern Miss.”

How many offers have you received to date?

“I have six offers. I just got my sixth from Incarnate Word in San Antonio.”

“I am receiving interest from Ohio State, TCU, and Texas A&M.”

“Yes, sir. I have taken visits to Houston Baptist in March, ACU (Abilene Christian), and Western Kentucky this past weekend.”

Since you just took the Western Kentucky visit, how did that go?

“It went really well. I talked to coaches a lot. I understood their offense. I like their campus – all of it suits me. Their offense relies on the quarterback; I like that.”

“Yes, sir. I am going to North Texas this Friday, Baylor after their camp, and Southern Miss.”

How is everything going in the classroom?

Are you competing in any other sports for the Yellow Jackets?

Of them all, which is your best individual event?

What was your personal record in the triple jump?

Getting back to football. What plans have you set with your receivers, and for whoever else wants to get work in, over the summer during the dead period for school practices?

“We have a lot of loyal guys who like to work. We meet up at the high school to work. I will text them to go throw. We are all dedicated as team. We all want to work hard and be on the same page. We all want to succeed.”

What personal goals have you already set for the 2019 season?

“I am set to win state. I want to make All-American and be rated as one of the top pro-style quarterbacks in Texas. My goal is to pass for 3,500 yards and rush for 1,000 in regular season not including playoffs.”

It is important for all quarterbacks to exhibit leadership qualities, if you will, tell me about your leadership abilities?

“I consider my leadership very good. I grew up in an agriculture background and doing 4H events. I am very broken in with that kind of work with my father and my mom. I am use to speaking in front of crowds and I am good at handling adversity. Adversity – it will come and you have to be ready to handle it. I feel I am a good leader and spokesperson for the team and I am good at setting a good example for everyone on the team.”

Austin, I appreciate your time today and wish you success with your upcoming camps and visits.