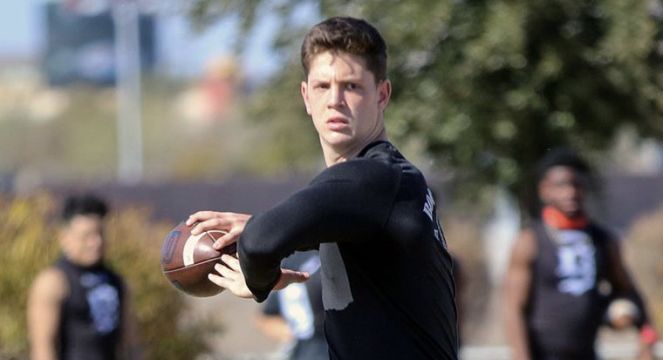 When it comes to sports, some guys are just gifted differently than others. That thought especially holds true with Class of 2023 Louisiana quarterback Eli Holstein. During his first varsity campaign, the 6-4, 210-pound, gunslinger was ripping it for Zachary High School completing 103 of 167 attempts for 1,600 yards with 10 touchdowns during the team’s eight-game schedule. Beyond the arm and ability to mentally pick apart a defense, the big man can also run. He flexed his 4.6 speed when called upon covering 190 yards on 37 totes with seven trips into the end zone. All the talent mixed with the upside has brought this four-star recruit nine offers thus far.

In an RNG stylized longform Q&A interview partnered with QB Hit List, Holstein breaks down his game in the pocket, offseason workouts, and updates us on his rapidly expanding recruiting action.

Eli, you are that true dual-threat capable of ripping apart defenses with your arm and your legs. Given that you are so capable in a multitude of ways, how were 5A defenses lining up against you during the 2020 season?

Everyone knew I was the quarterback with the LSU offer. They see a big kid, and thought I could not run. They were dropping seven or eight to go against the pass. In our first game I had two rushing touchdowns. Then they stopped dropping so many. After that I could throw and run on them when I wanted to.

What was the offensively philosophy of the Broncos during the 2020 season?

In which game did you turn in your best personal performance?

My best performance was probably against Denham Spring. In that game I had three passing touchdowns and almost 300 passing. I was two drops away from five touchdowns and 400 yards passing.

From a development standpoint, my first varsity game of the season against St. Augustine was a top one. They are a great powerhouse team in New Orleans. At first, I was hesitant. When I came out in the first half, I was looking like at first time starter. But after halftime that all changed. I had the game sealing touchdown throw (won 41-32). Another best game for me was against Airline. That was a good one. I had two or three touchdowns in that one and 300 yards passing.

As a passer, what were some of the areas to your game that were clicking allowing for the big season?

Towards the end of the year, I had really developed it. I was recognizing coverages and improving my reads, and knowing what the defense will do. My offensive coordinator helped me a lot. I was ripping it. My accuracy and my power improved. You have to be on time and on target, that is how quarterbacks are successful. I was on time and accurate.

As mentioned, your speed, plus your size, is a nightmare for defenses. What is the best 40-yard dash time you’ve put down?

How did your abilities escaping the pocket and running improve during the 2020 schedule?

I became more comfortable running with the ball. I realized I had the speed and the size to run through people. I was getting out of the pocket, but remaining a passer. When I rolled out, if they came down, I threw it over them or if they held back, I ran it. I made them wrong every time.

This was already kind of touched on. Another thing that stands out with your game is your decisiveness. From your pre-snap reads, it looks like you know where you want to go with the ball, and you get it there in a hurry. How did your understanding of defenses and coverages grow in 2020?

I started off on a good note to the season. My brother has helped me with that, helping me know what to look for. My offensive coordinator would go over if they are lined up a certain way, this is what we want to do or to go here with the ball. We talked about what we are seeing on the field in the first half for the second half adjustments. We were always going over their strengths and weaknesses. Another thing was changing plays at the line. Again, making them wrong every time.

What have you been working on with your fundamentals this offseason?

My footwork, that is a big emphasis for me. I need to clean that up. If I fix that up, all I need to do is keep building and I will be successful.

Are you playing 7v7 this spring?

How is that going?

Good. We’ve played in Miami and Phoenix. We made it to the championship in Miami. In Arizona we started off slow but went through bracket play making it to quarterfinals. We played Tucson Turf. They had won two in a row. We were down half our team losing our defensive backs and receivers and still almost made it. We are pretty darn good, one of the best in the country. Going forward, we know what we need to do to keep being successful.

Are there any camps coming up you may attend?

Yes. I am going to the Elite 11 Regional for sure.

The one in Indianapolis. I have been working for that one. I am not sure which other camps I may go to. One of my old coaches is up there. He played with the Colts. I will hang out and go see him while I am there.

Are there any college camps you may go compete at this summer?

With the dead period, I am not too sure which camps there will be this summer. I am taking it day by day. Oklahoma State quarterbacks’ coach, Coach Tim Rattay, has invited me to an invite only camp there on June 7. I am looking at that.

Let’s get into recruiting. Which schools are showing interest?

I have some follows on Twitter. South Carolina, a bunch of their coaches followed me today (Monday). There are some schools that are in touch with my head coach, but I am not sure who right now.

Which were the last couple to offer?

When you get to talk to the different college coaches, what are they telling you they like about your game as a quarterback?

They like my size, my athletic ability, and my poise in the pocket. They like that I am cool under pressured, a good leader, and a good kid. Coaches are telling me that they like my power and my drive on the ball. They also like that I am a 4.3 GPA student. They know that I am smart and that I can read a defense knowing what they are doing.

In addition to the possible camps, are there any visits you may take this summer?

I want to visit any school that has offered. I am taking an unofficial to Texas A&M seeing College Station this weekend with my family. We are just visiting the city and campus, not meeting with the coaches.

Eli, I enjoyed going over your game with you today. Wishing you success with the rest of your 7v7 and camp season until we talk again.