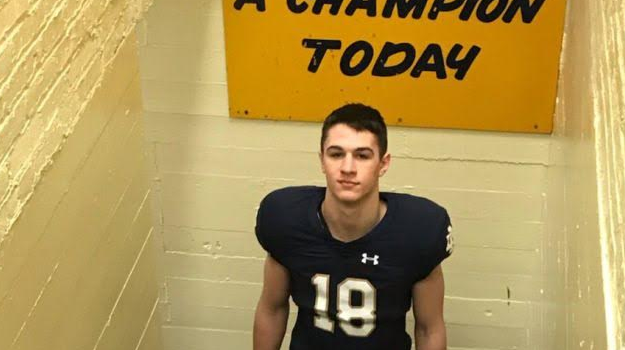 The stuff that dreams are made of came out of Gibson Southern High School during the 2018 season. As Class 3A defenses licked their chops thinking they were going to get one over on a freshman quarterback, Brady Allen defied all the odds picking apart the opposition. The 6-5, 200-pound, gun slinger tossed for 2,438 yards with 29 touchdowns against just four interceptions completing 160 of 282 attempts. For the effort, his Titans’ squad posted a 9-3 season with the Class of 2022 talent taking home All-PAC and All-Southwest Indiana honors; not easy to do as an underclassman. The post-season accolades continued with offers extended from Cincinnati, Indiana, Purdue, and Virginia Tech. Now, seemingly every college football program in the region is after one of Indiana’s best.

In an RNG exclusive partnered with QB Hit List, I sat down with the freshman phenom after he competed at the Elite 11 Regional in Nashville for an overview on his game, the camp, and his summer college camp circuit.

Brady, to say that your freshman season against varsity talent was impressive is an understatement. When did you win the starting job for the Titans?

“It was last summer. Me and another guy, we battled it out. He ended up being my slot receiver. We worked very well together. That was my goal for the 2018 season, to play at that level with the older guys. I was fortunate. It was an exciting season for me.”

What type of offense did you execute during the 2018 season?

“We run a Spread offense. We have one running back and four receivers. We mix it up with tight ends sometimes and do some RPOs (run-pass option). I got to throw it every game. Once I got going, I started getting the speed of the game down. That is when everything got easier.”

How did you prepare each week for a game?

“It was studying film. Our coaches would put film up. I would go over their defense and we had new plays each week. Film was a big part of what made my job easier once game time came.”

You touched on this a minute ago. What was that point in the season when everything slowed down and you felt in control of the offense and the experience in the game started taking over?

“Yes. During the regular season we lost two games. Game 4, that was a welcome to high school football moment against Henderson County. They put it on us (23-0). After that, everything slowed down. I was in the groove. Everything got easier after that game.”

Your game had to grow by leaps and bounds, what were some of the areas that showed the most improvement from the start to the end of the season?

“Being able to read defenses, that was a big one. Being able to lead. Being a young QB, that could have been tough. The older guys made it easier to be the leader and for me to be the quarterback for the team. Another thing was not worrying about making a mistake. In my first game, the first pass I threw was an interception. I look back and laugh at it now. I knew they were going to come. Being poised and staying calm were areas of my game that really grew last season.”

What are some of the strengths to your game?

“I feel like I can put a ball anywhere I want. I am accurate and my arm strength, those are main parts to my game. I have a quick release too.”

This offseason, what have you been focused on with your technique work?

“I have been focused on my footwork; I am getting that down. I am also working on moving better in the pocket.”

Have you competed at any camps this spring?

“Yes. I went to a Rivals camp in Cincinnati and to the Elite 11 in Nashville.”

How did the Elite 11/Opening Regional go?

What did you do well at the Elite 11 Regional?

“I feel like I was able to showcase my game. A few times there were things I could have done better. There are things I need to work on, but I feel I did pretty good. I have shin splints from running track, but I worked through it.”

Do you have any college camps on the schedule?

“Yes. I am going to Georgia next Thursday and Friday. After that, I am going to Duke, Notre Dame, and to Penn State in July; those are the official ones. There are a lot we are still trying to figure out. I will be going to Ohio State for sure. There were a lot of camps I would’ve liked to have gone to, like Purdue and others for instance, but we had some conflicts with our high school stuff and I don’t think we’re gonna be able to make it to some.”

Which schools are showing interest after your breakout 2018 season?

“I have four offers.”

“I got my first offer from Indiana – it was a dream come true. It has been my dream to play college football. It was surreal. I am grateful and thankful for the offer.”

Nice. Which schools have you visited so far?

Since Indiana was your first offer, how did that visit go?

“It was great. That was my first-time meeting Coach (Kalen) Deboer (OC). I love Coach (Tom) Allen (head coach) and how they practice. The practices are upbeat and intense. I got to see Coach (Nick) Sheridan (TE) again, that was great.”

What about Notre Dame, how did that visit pan out?

“It was amazing. Notre Dame is a big-time school and played in the College Football Playoff last season. That was really cool to visit them. It was cool to meet Coach (Tom) Reese (QB) and to see Ian Book (senior QB). They are an upbeat team. I had a great time at Notre Dame.”

Last couple of ‘getting-to-know you’ questions. What is your favorite subject in school?

Which college and/or NFL quarterbacks do you like watching to learn more about the game?

“Tom Brady. I try to imitate him. I get my mechanics and throwing mechanics from him. I like Peyton Manning; I grew up a Colts fan. I like how those guys carry themselves. In college, I liked watching Dwayne Haskins (Ohio State). I feel I am a lot like him. I am a pocket passer with mobility who can make any throw.”

Brady, I enjoyed the interview today. Thanks for your time and good luck at all of the upcoming camps.