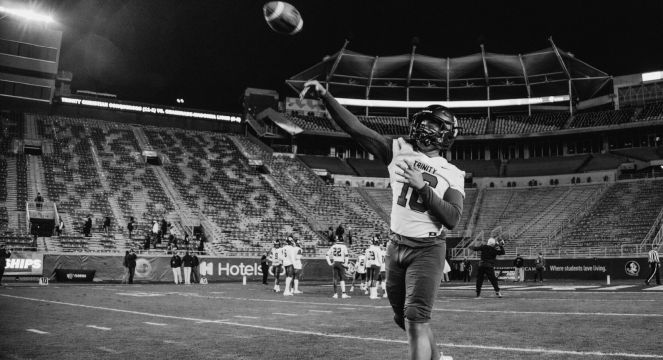 Receiving varsity game reps playing behind three-star senior quarterback Ja’Cory Jordan during the 2020 season will prove invaluable for Class of 2025 quarterback Colin Hurley (5-11, 199). The eighth grader was part of Trinity Christian Academy’s 12-1 state championship season going against Florida 3A squads. With Jordan graduating and heading off to Bowling Green, the Conquerors are now in Hurley’s hands. The offseason has already been filled working with his coaches and QB trainers on expanding his understanding of the game and technique preparing for a repeat in 2021.

In an RNG first-look partnered with QB Hit List, Hurley breaks down his eighth-grade season taking on all the four- and three-star upperclassmen five years older and how that experience has helped his growth on the gridiron.

It went amazing. We won the 3A state championship in Florida. I played varsity and JV. I got some good reps with the varsity scoring some touchdowns, moving the ball downfield, and gaining experience from my coaches and teammates.

What offensive set were you running?

We run a lot of Spread out of the shotgun. We have a really strong running game.

How do you feel your skills fit into the offense?

I feel like I can stay in the pocket but if I need to get out, I can work the field. I can do the RPO (run-pass option and make those passes from the pocket.

Which routes were your receivers executing?

We ran a lot of concepts. We ran digs, seams, corners, slants, RPO quick game, and a lot of skinny posts. There were some comebacks to the front pylon in the red zone too. That was mostly it other than concepts.

How were defenses trying to cover you guys in the secondary?

The Conquerors varsity squad had a big year going 12-1. Going through that season on both the JV and varsity levels, how did that help improve your overall game?

I learned a lot from my coaches and from teammates, and how to prepare for next year for another state championship. The game was a lot faster, I had to get used to that. I worked on my timing and where I think the DB will be when I throw; I wasn’t used to that. Now I feel like I am pretty good with my anticipation with my receivers.

Watching the upperclassmen run the offense, what were some things you learned from them that has helped your understanding of the game?

I learned how to do the drops and read the plays.

Going into the offseason, what are you focused on with your technique?

During the offseason I am playing with two 7v7 teams. I am also very active in the gym going four times a week. For QB training, I am doing that two to three times a week to keep my arm fresh for tournaments and practices. We do routes on air, technical drills, and on the third day is whatever I want to do.

What have you been doing to increase your velocity and accuracy?

I work on my velocity through my gym performance and doing bands. I do QB drills before my workouts, but I don’t strain out my arm on velocity drills.

You mentioned this a minute ago, going deeper. What are you doing to increase your football IQ?

I do white board session with my QB coach, and I watch film with my dad and QB coach. We watch film on NFL quarterbacks so I can learn the patterns for drops and coverages

Colin, it was great getting time in with you today. Wishing you success this offseason preparing for another Florida state championship.