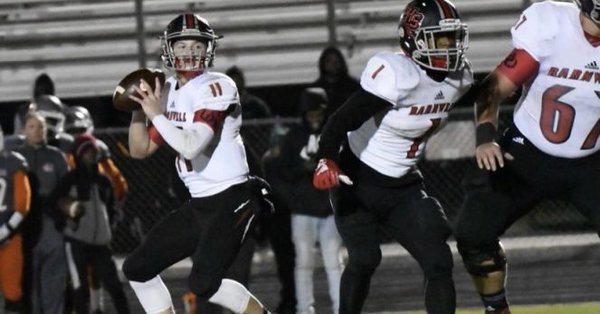 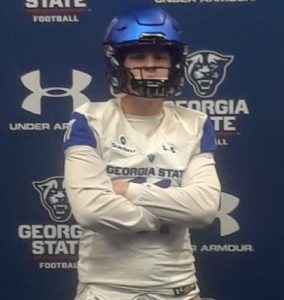 Class of 2020 quarterback Craig Pender hit the 2018 season full steam and did not slow down for any opposing South Carolina defense. The emerging pocket passer with dual-threat abilities took full control of his Barnwell High School squad leading the Warhorses to a 2A state title run posting a 13-1 season. His productivity in the Spread is capturing college interest setting up a big summer camp circuit and an even bigger senior campaign.

With the mix between the offense scheme, the coaches’ game plans, and Pender’s play on the field, the Warhorses embodied the Spread mentality exploiting weaknesses in the opposition’s defense. The run game produced 2,800-plus yards with 35 scores, seeing their QB account for 216 of those yards with three trips into the end zone, while four players went over the 451-yard rushing mark. The aerial attack was even more diverse with five players accounting for 200 or more receiving yards and 35 total touchdowns. The architect of the offense completed 64 percent of his passes for 2,364 yards nailing all 35 passing scores onto the big board. Pender (5-11, 190) earned Region Offensive Player of the Year for his efforts and regional recruiting interest.

In an RNG exclusive interview partnered with QB Hit List, I sat down with the three-star quarterback finding out how he controls the Spread offense and what his game plan is for the college football summer camp circuit.

Craig, the Warhorses were one of the top teams in South Carolina 2A making a clean run all the way to the state championship game. The offense was a machine last season posting 585 total points. What was your approach to a given game managing the offense in a highly productive fashion?

What type of offense do you guys run and how does the offense fit your skillset?

“We are a Spread team, four-wide. The offense fits me well. We can run the ball, and I can run it, and we can spread it around throwing it. I feel like I have a good arm. The offense suits me well from the standpoint that I can run and throw it.”

The 2018 season was a breakout one for you, at what point in the season did you start to feel in control of the game and everything was really clicking for you?

“From the first game of the season. My coach made me team captain just before our first game; that gave me confidence. From the start, I knew I could do this and that we would have a really good season.”

From all the game experience last season, what was at least one thing you learned that will make you a better quarterback and/or leader going forward?

“I learned that watching film is very important. I also learned how important being a leader on and off the field is for my tame and how that will make each one of them better.”

How did you take your overall game to the next level during your junior season?

“I took it to the next level by diving deeper into the playbook and diving more into film to recognize coverages. Playing 7v7 has helped me with that. Knowing the coverages was accelerated my game. I had a quicker release last season and I was able to drop my arm slots when I had to. I can throw it from multiple angles to get the ball out.”

What have you been working on this offseason?

“Speed – I am trying to get faster so defenses have to respect my run game too. I have been working on my ability to make plays happen off the scramble. If a play breaks down, I know I can make plays downfield. I am getting deeper into my drops and working on a touch ball this offseason.”

What do you feel are the overall strengths to your game?

Have you showed off your skills at any camps this spring?

“Yes. I have been to camps at Davidson, Charleston Southern, and Wake Forest.”

How did the Charleston Southern camp performance turn out for you?

“It went really well. It was raining on the first day, I went twice, but I ran the drills and did everything they had set up at the camp. I was invited back to throw in better weather for the next day. They liked the way I throw the ball. I like where that process is going with Charleston Southern.”

Are there any more camps on the schedule?

“Yes, sir. I am going to camps at Wofford and North Greenville.”

Which schools are showing interest in you now?

Tell me about the Davidson visit, if you will?

“Yes, sir. I am planning on visiting Charleston Southern, Wofford, hopefully Davidson, UT-Chattanooga, and I might go to Georgia State.”

Craig, it was great getting time in with you today. Good luck with all your upcoming camps and visits.