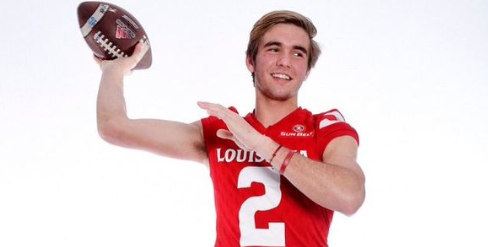 The old football saying is a defense will travel, ditto for having a gun for an arm, being accurate, and knowing how to pick apart defenses. During the 2017 high school football season in Oklahoma, JD Head ripped apart 3A squads leading Jones High School to a 13-1 record and a run to the semifinal round losing by three to eventual state champs Marshall. Head was brilliant as a sophomore, but the challenge that laid ahead in 2018 was full of unknowns in Texas. As skill will have it, all turned out well for Head in the Lone Star State.

Tossing for 3,085 yards with 44 touchdowns while carrying a 69 percent completion percentage (225 of 326) is no easy feat, yet Head made it look routine. The question mark was how well he could do against 6A Texas defenses. The foreign Texas gridirons proved to be another area where the Class of 2020 talent could excel completing 157 of 239 passes for 2,335 yards with 24 touchdowns against just five interceptions with one rushing score. The previously unknown talent rose to attention in a hurry taking home 6A District Offensive MVP honors – not bad for a kid from Oklahoma.

The areas where Head has impressed extends beyond the field and stands in both Oklahoma and Texas to the college ranks where he currently holds 11 offers from Cornell, Kansas, Louisiana, Louisiana Tech, Nevada, Pennsylvania, Southern Miss, Texas Southern, Troy, Tulane, and Yale. The Ivy League may have given it away, but the three-star recruit is also a high-achiever in the classroom carrying a 4.12 cumulative GPA with a 26 scored on the ACT.

In an RNG exclusive interview partnering with QB Hit List, I sat down with one of Texas’ top talents in the pocket going in-depth on his skills, recruiting, and offseason grind.

JD, the Oilers were an offensive producing machine in 2018 putting an average of 42 points per game on teams. What was clicking so well for you guys last year allowing the unit to be so productive?

“Coaching. We came together, we had an awesome offensive line, and the coaching. We had an amazing line. Our running backs were great and my receivers helped me out. I was put in a good position to manage games and I was able to get the ball out to my playmakers.”

Nice transition here. The offensive line did a great job of blocking for you allowing you to pick apart defenses. But when you had to, you showed your talents throwing on the run and moving in the pocket. What were some of the other areas to your game you were able to showcase during your junior season?

“The ability to play at a high level at a bigger school. The year before I was at a smaller school (Jones). We got to the semifinals, but going to a 6A Texas program, I had to show them I could do it. For them to believe in me, it was awesome to receive that from my teammates. And the coaches put me in a great position. I feel blessed to have had such a good year. I got a lot stronger from working out and going through the process. The throws were easier for me to make and the game slowed down. As I am getting older and maturing, it all became easier and more technical. I knew where the ball was going and I knew how to better play the game.”

Looks like you execute the spread attack for Pearland. How does that offense fit your abilities?

“When spreading the field out, I have a good arm and I can make all the throws. I am very competitive and I have that go-fast mindset, and we do that. We run RPOs (run-pass option) and quick decision plays. We have the athletes on the outside to do that with in our offense. I have receivers who can go get it.”

You set some school records passing for six touchdowns in a game and throwing for 358 yards. The big production game aside, which game was your best and why?

“My favorite was the Dawson game (won 56-27). That is a really big game in Pearland. We are rivals and are in the same town. A lot of people come to that game. The year before we lost on a field goal to them. We came out with the mindset to dominate them, thankfully we did, and we will do it again this year.”

Was there a weakness to your game to start the year but with experience and work you turned that weakness into a strength?

“Confidence. That was one thing for me. I did not know if I could compete given the move from Oklahoma to Texas – I knew it my heart but I wanted to do it on the field. It is the same game, but against better athletes. It was a good feeling knowing I can do it.”

What do you feel are the strengths to your game?

“I have a good arm, I am smart, I make quick decisions, and I find a way to win. That is what I strive for, just to win. I don’t care who gets the glory, I just want a state championship.”

Which areas of your game have been the focus of your offseason workouts?

“Getting bigger. Last year was rough, getting dinged up towards the end of the season after some hits. I am getting bigger for the long season ahead. The last half of the season you have to be in tip-top shape. I am grinding in the weight room. This is my first year to not play another sport just focusing on football. I am working on what do I need to do to be a better quarterback.”

Have you been to any camps this spring?

“Yes. I went to the Nike Opening and to an Under Armour All-American Camp. I thought I performed well at both. I threw well and showcased my talents as much as possible.”

Do you have any upcoming camps you may attend?

“After spring ball, we have a couple of practices left, there are some programs that have offered me that I may camp at and go on visits as well.”

“I am receiving interest from Memphis, Virginia Tech, Tulsa, LSU – a lot of schools, Texas A&M and Arkansas State.”

How many offers do you hold?

Which schools have you visited recently?

“I have visited Houston, Louisiana Tech, and Louisiana-Lafayette. I plan on taking all my visits after spring ball. After I take my visits, I will get my Top 5 and go from there.”

How did the Louisiana Tech visit go for you?

“It was really good. I loved it. It is beautiful there. The coaches and players are awesome. It was a good time.”

What about ULL, how did that go?

“It was amazing. I love it there as well. The coaching staff is amazing. ULL is a good place.”

You mentioned taking some visits after spring ball, which schools might you go see?

“The only one that is set in stone is June 1 to Kansas (unofficial). After that plan, I plan to visit the Ivy League offers; Penn, Cornell, and Yale.”

JD, it was great learning more about you and your talents on the field today. I wish you success at the upcoming camps and with your visits.