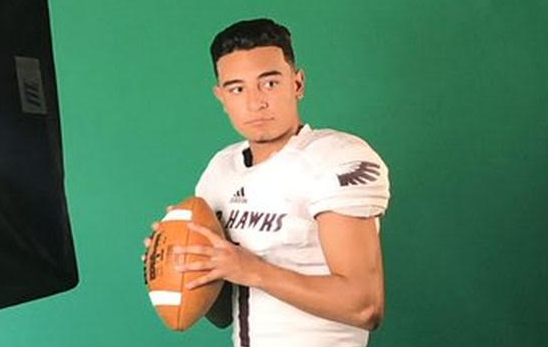 The proverbial proof is in the pudding watching the reel on Class of 2020 dual-threat quarterback Gabriel Herrera. Herrera has showcased his skills with Parkland High School over the past two seasons as one of Texas’ best. During his junior season, he threw for 2,975 yards with 39 touchdowns while adding four on the board with his legs. The 5-10, 160-pound, talent took his game to another level running the Matadors 2019 record to 11-1 against 5A squads by completing 215 of 330 passes for 3,562 yards with 46 scores. When called upon to make plays with his legs, he covered 246 yards off 67 totes with five more touchdowns.

The three-star rated quarterback has six offers on the table with college programs showing interest as we near National Signing Day. Coming off another big season with recruiting trips lined up, I sat down with Herrera for an exclusive interview partnered with QB Hit List.

Gabriel, the Matadors offense was lethal in 2019 pushing the ball up and down the field. What was working for you guys allowing for such a prolific season?

“Our coaches put together a great game plan week in and week out. In film study, we breakdown everything. Our chemistry, we have built that since the end of the 2018 season. We put a chip on our shoulder and kept working hard all season.”

You were on point and worked the rock producing two 1,000-yard receivers in Jesus Sandoval and Donta Hayes. How did you develop your chemistry with those guys to make sure each of you was able to produce at a high level in games?

“It wasn’t just me. You know you have a good connection with receivers when they both go over 1,000-yards. We’ve been playing together since we were little kids. Through summer workouts and grinding when no one is looking, that hard work showed this season.”

Certainly. What base offense did the Matadors run in 2019?

“We ran a true Spread with some RPO (run-pass option).”

You have a strong arm with a quick release and you have some wheels on you. In which other ways does the Spread offense fit your skillset?

“It fits me well. We have great deep threats on our team. Our receivers are some good with their routes, and we have good routes underneath. We are so spread out, they leave lanes for runs. We can make things happen downfield in our offense.”

What aspects of your skills jumped to another level this season?

“This year, I put weight on over the summer and became more explosive. I did more running this year than in 2018. I became more of a play-maker. I can extend plays with my legs and hurt the defense. My footwork and timing, not getting flat footed or stagnant in the pocket, improved. That helps with progressions.”

“The first game against Burges (El Paso) was a nail bitter. We won 41-40 in overtime. We got a last second PAT to win it. I had two picks, my most ever in a game. One was a bone head play; I did too much and forced a throw. My second one was a tipped passed, that was a pick-six. We were in the chasing game after that. But we rallied as a team. I scored the game winning touchdown.”

Against Burges, you overcame a lot with your play showing that next play mentality. How did that game make you a better quarterback?

“In the locker room at halftime, I did not put my head down. I kept my head up, and they rallied around that. I showed that never quit attitude and that next play mentality.”

Going into recruiting. Which schools are showing interest but have not offered yet?

“Mary Harden Baylor in Belton outside of Waco, Tarleton, Yale, Cornell, Abilene Christian, and Brown are all showing interest.”

Which schools have extended offers?

***Herrera was offered by Wabash College on Friday

Nice. During the season did you take any visits?

Are you planning on taking any coming up?

“On Friday, I am taking one to McMurry, Culver Stockton in Missouri, and then Wabash (IN) is coming for a home visit.”

Turning to the classroom. What is your cumulative GPA?

What did you score on the SAT and/or the ACT?

Back to football. Leadership for a quarterback is important. How would you describe your leadership style?

“My style, I am close with my players. In times of seriousness, I lock in and go. When something is needed, some constructive criticism, I give it. I am their guy in the locker room, but on the field it will be handled.”

This offseason, what will you work on with your technique getting ready for college ball?

“I will work on strengthening my arm, keep my quick release, and improve my footwork – that ties into everything.”

What about with your overall workouts? What will you work on there?

“I will work on my explosion. I go to a personal trainer working on gaining weight, my explosion, and my agility.”

Gabriel, it was great talking to you today after your big senior season. Wishing you luck on the recruiting trail going forward.