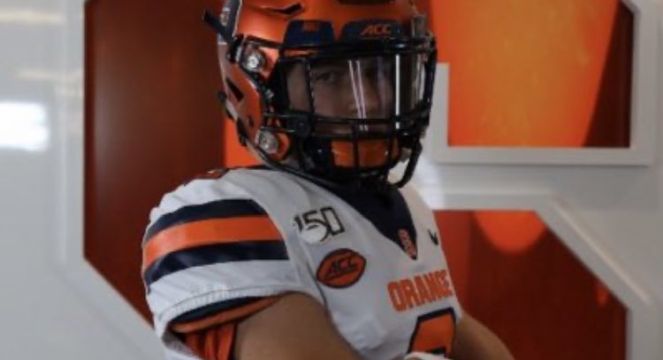 Since the 2017 season, Class of 2021 quarterback Daron Bryden has been laying it on Connecticut high school defenses. The Bloomfield gunslinger has worked his craft along the way leading to noticeable improvement with his game which has translated to a 19-1 record over the last two seasons. Good news for the Warhawks, and bad news for the competition, there are still three games left on the schedule in an 7-0 run with an opportunity for a perfect season.

Bryden’s freshman season was certainly a sign of things to come. He dropped back 171 times completing 115 passes covering 1,676 yards with 19 scores going up on the board. His 2018 campaign was a big push forward slicing secondaries for 2,306 yards with 37 touchdowns on 122 of 193 passing. The 6-1, 175-pound, quarterback is back to throwing darts as a junior completing his attempts at a 70 percent clip covering 1,869 yards with 25 scores against just three picks in the team’s perfect start. That ability to run the Spread offense with precision has brought about college attention, and that notoriety is growing.

In an RNG exclusive interview partnered with QB Hit List, I got a chance to breakdown Bryden’s game with a quick update on his recruiting prospects.

Daron, the offense this season has been well-balanced leaning to the passing attack. What did you do pre-season to mentally prepare for the 2019 schedule and running the Warhawks’ offense?

“During the preseason, I spent a lot of time with the receivers. We got our timing down. We competed at a lot of 7v7 tournaments. We won a big tournament, the Grip It and Rip It Tournament. When the season came, after the second game of the season we had gelled together. We look really good.”

What set are you executing?

“We run a Spread offense. We do a lot of RPO (read-pass option) and throw the ball out of that set.”

How does the offense fit your skills?

“It fits well. I am a passing quarterback. Being in the Spread shows my arm strength and my ability to make plays with my feet. The offense helps show what I can do on the field.”

You have done a great job of spreading the ball around the field, which has led to a 50 point per game scoring average. How have you continued to work with your receiving corps to build that chemistry needed to be successful?

“We always get extra work in after practice. I know where they will be at on a route and they know where I will put the ball in the games. Spreading it around, it is great having five great receivers to spread the ball around to this season.”

Which areas of your technique do you feel have improved the most this season?

“I have a quicker release, I got stronger, and I am a better leader this year. Those are the three big things I have improved on the most this season.”

What about your knowledge of the game, how has that improved?

“When I started as a freshman, I did not know how high school ball was going to be. It is a lot different than youth ball. My first year in high school, I went off quick reads. This year is a big improvement on that part of my game. I know pre-snap where I will go. I know the matchups that I like and the defense they are in and I can see that as the play develops.”

Which schools have taken an interest in your play on the field?

Have you visited any schools yet?

How did the Syracuse trip go?

“I really liked it a lot. I like their school and their facilities are amazing.”

And the UConn visit?

“It went well. Their coaches are always texting me asking how I am doing and wishing me good luck with the game that week. UConn is nice.”

Back to football. The next team up on the schedule is Bulkeley/Hartford (0-7). What kind of challenge might their defense give you guys on Friday?

“They might load the box to bring extra pressure on me; that is usually what they do. We will be fine. My offensive line does a great job picking up blitzes and giving me time to throw.”

What does the team need to do to run the final three games of the season to remain undefeated?

“We have to stay focused, practice hard, and we cannot get big headed. We have to play our best no matter who we are playing.”

Daron, I appreciate your time today and wish you and the Warhawks success the rest of the way.