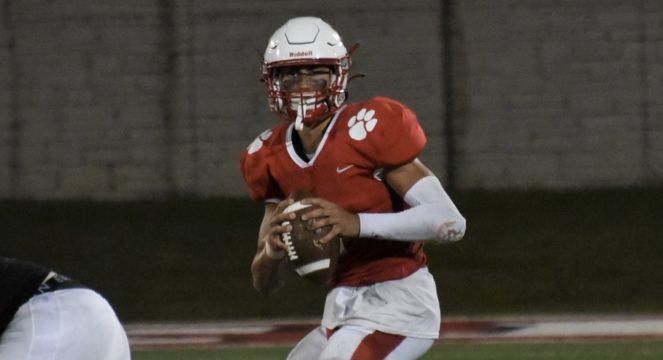 High school football fans in Kentucky have a treat in store during the 2020 season, and that is senior quarterback Cameron Hergott. After three seasons spinning it with Beechwood High School, the three-star dual-threat is ready to take the Tigers back to the promised land seeking a second 2A state championship in three years.

The productivity on the field is rising, and matching the wins going up on the board. During the 2018 season, Beechwood marched to the state title game topping Pikeville 21-20. Hergott mixed it up along the way compiling 1,671 yards with 24 touchdowns in the air and added 547 yards on the ground with seven more scores going up on the board. Leading a young squad last season, the 6-3, 190-pound, talent laced in 177 completions for 2,076 yards with 15 touchdowns while upping his ground game with 751 yards and 12 individual trips into the end zone. The result was a quarter final finish along with District Player of the Year, a Northern Kentucky All-Star Team selection, and four offers in hand.

The unfinished business from the 2019 run has Hergott throwing darts and running past defenders at will. The Tigers have started the 2020 season 2-1 with the lone loss after going up three classifications in a 19-17 slugfest with No. 5 ranked Covington Catholic. Hergott has already thrown for 708 yards with two scores and rushed for 204 with three touchdowns.

In an RNG first-look partnered with QB Hit List, Hergott takes us inside the Tigers’ huddle for an update on the season.

Cam, the Tigers made a deep run into the 2019 playoffs going to the quarter finals. You guys have started off tough this year, giving 5A Covington Catholic all they could handle in a 19-17 throwdown. How is the team looking on the 2-1 start?

We look really good. Going into the offseason, we knew we had to train and work hard. We had an okay season last year, and we had a lot of young guys starting. We felt more prepared than before. This season, we can spread it out. We are throwing more than last year. I feel like I can run better than last season, that helps the offensive line and receivers out. We have started off strong this year, and we are trying to keep it going.

What style of offense are you guys running?

We have the spread and under center formations. What we do, it depends on who we are playing. We do everything.

Which routes are you connecting on with the scheme?

We have bang-8 post, digs, we run a lot of short game like slants and hitches, and we can go deep with fades and posts.

You have the arm making all the Saturday throws and you have the speed to rip off a 60-yard touchdown run. Which parts of your game might get overlooked beyond the big arm and great running talents?

I feel like I am really good at reading defenses. We make checks during the game; I know which play to check to and the plays that will work against different schemes and defenses. My mental game might get overlooked.

Over the offseason, which technical parts of your game did you focus on the most?

My footwork, quickness in the pocket, and pocket movements. I worked with a quarterback coach, Tony Pike, played for Panthers and Bengals. We worked on movement, getting my feet set, throwing on the run, and all the little details.

This was an overlooked part of your game that you mentioned a minute ago. What were some of the things you did to expand your overall football IQ as a QB this offseason?

I went to a lot of camps, like three or four, this offseason. There were a lot of good coaches teaching me. I soaked in as much as I could. Tony Pike has gotten me right with film. Going through our offense and the defenses we will face, we worked on knowing where to throw the ball based on the defense. I think it has really helped me. In the first three games of this season, I have shown I can pass well. I am always working on my accuracy.

After putting it all together in fall camp into the early part of the season, where are you showing the biggest gains in your skillset from last season?

From a year ago, my arm strength, I have improved that tremendously from working out and getting stronger. With the arm strength you can make any throw. From there, then it is working on the mental part, who you need to throw it to, the timing, which is everything. I have gotten better with timing so my receivers can do something with it; that is our job as a quarterback, get the ball to the receivers so they can make plays. My arm strength, accuracy, and timing are all showing improvement.

When you are dropping back, what kind of defenses and coverages are the opposition giving you to pick apart?

I am seeing a lot of man and a lot of teams spy me. They may show a Cover 2 but might roll to a Cover 3, or skin it. Teams are spying me because I have been running well. When they spy, they go man, and that makes it a lot more fun for me.

For any given game, what is your weekly preparation?

On Monday, we have practice. We come in and go through a team timing period going over the plays for that week. During that practice, we go over about 50 plays. After that we lift and then we watch film for about an hour to get a look at the week before defense. On Tuesday, for me, our team has a defensive period. I work out with the defense on Tuesday and then watch film. Wednesday is the offense’s practice. We go over the schedule then run the plays against the defense. On Thursday, we keep going over the plays and Friday is game day.

How much film are you watching during the week?

Two hours at least. My uncle is the offensive coordinator for the team. We sit down and go over film looking for tendencies. We have checks, go over the coverages and over the checks again.

Sounds like you are very well prepared come game time. With you, I know college programs are liking what they are seeing in your talents. How many offers do you have?

Eastern Kentucky and Fordham. Last year I visited Kentucky, UC (Cincinnati), Miami-Ohio, Toledo, and Eastern Kentucky. All those schools still text me or call. Middle Tennessee sends me stuff too.

Nice. For the culmination of the season, what goals have you set for yourself?

The main goal as a team is to win state championship. That is the goal. That is my goal, and all that I focus on. Any other awards that come with it will be awesome, but I am just working for the ring.

Going into the classroom. What is your cumulative GPA?

Did you get an ACT and/or SAT in before all the tests were cancelled this spring?

Do you play any other sports for Beechwood?

Last question. We’ve covered your academic and athletic talents, what do you like to do for fun off the field and away from the classroom?

I like to hang out with my friends, we have fun and laugh. Hanging out with the boys, that is a lot of fun. I play video games, 2K and Madden, and I eat a lot. That’s about it. I am a pretty normal kid.

Cam, thanks for your time today. Wishing you and the team success the rest of the way this season.