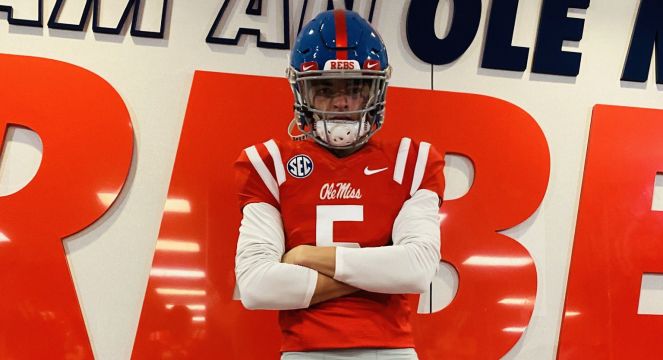 The arc in the career of Parkview Baptist quarterback Roman Mula took a big jump during the 2019 season, and that positive jump has caught the attention of college programs. Going from a triple-option scheme to a Spread, Mula took to the challenge passing for an estimated stat line of 950 yards with 17 touchdowns and rushed for 500 more with 10 trips into the end zone. The three-star Class of 2021 recruit is in an extreme growth period taking in everything like a sponge under the tutelage of former NFL QB Stefan Lefors (Carolina Panthers/Louisville). The offseason has already been a big one displaying the skills early at The National Combine in San Antonio and at a Rivals Camp Series regional, and it is just getting going.

In an RNG exclusive interview partnered with QB Hit List, I got time in with one of Baton Rouge’s fastest rising arm talents learning more about his game and growing recruiting process.

Roman, you were laying it on opposing Louisiana defenses last season. What style of offense were you running with the Eagles?

“We were running more of a pro-style set but with multiple styles. I was under center and in the shotgun. In some games we only threw the ball about nine times, in others we threw about 20 times. It depended on our opponent and how we could attack them.”

How did your skillset grow last season within the scheme?

“It grew a lot. I grew up never taking one snap from the shotgun; I was running a triple-option. With the new staff we switched to shotgun and to more of a modern offense. The change helped me keep my eyes downfield when scrambling. My leadership also grew. I was the man this year, I had to take control. Football wise, I was staying in the pocket longer, I needed to do even better at it, but I got better at that throughout the season. I was extending the play when the pocket broke down.”

What were some of the coverages you were seeing each week?

“We were going against teams that were stopping the run first. We were seeing Cover 2 and 3, and they’d blitz a lot. On long yard distance plays we were seeing a Cover 4 – two high.”

Before the ball was snapped, what was your routine scanning over the defense?

“On specific plays I would do a backer read and go from right to left. I’d look to see if the corner will press and then switched to the other side for the read. I was keying on the safety to see if the middle of the field is open or closed – all of that.”

All players at each position come across a challenge at some point in the season. What challenge did you face during the 2019 campaign on the field?

“I’d say mostly staying in the pocket, and not seeing a ghost. It was challenging taking those first snaps ever out of shotgun. Extending the play, that was a challenge but I got better at that and throwing it downfield. I was learning everything with a new coach and a new offense. We started from scratch and did it in a short time, that was a challenge.”

How did that challenge help make you a better quarterback?

“It taught me the ins and outs of being a quarterback. It taught me how to run a real modern-day offense. It helped me see how these guys do it in the pros. It taught me to extend the play at all costs and how to fight for those yards.”

Which areas of your game are you working on this offseason?

“Mostly the usual – throwing and footwork – it is locked down but I am keeping it sharp. I am learning my receivers and getting our timing down. I am working on dictating the defense more. I am learning on how to find their weaknesses, seeing what’s there and what they are giving me, and reacting to it.”

Is there a goal you have set for yourself this spring and/or summer that you want to accomplish before the Eagles’ fall camp begins?

“Yes. I am trying to get my weight up to 190 pounds. My goal is to get stronger and to develop a team bond – this is our senior season, let’s lock this in. I am showing leadership in that.”

Before everything shut down, did you have a chance to compete at any camps?

“I went to a Rivals camp series and to the National Combine in San Antonio.”

How did the Rivals camp go?

“It went well. I threw well there. It was good to throw against the best in the area. I really liked it.”

Of all the drills they had you do, which did you perform at your best?

“The one-on-ones, I did really well in the one-on-ones. We did a drill where you back up and throw off balance, I did well on that.”

Once everything gets back to normal, are there any camps upcoming you may attend?

“I am supposed to go to the Opening. For college camps, Florida Atlantic (FAU), Ole Miss, Louisiana Tech, ULL (Louisiana-Lafayette), South Alabama, Lamar, and Arizona. With all that is going on, we will play it by ear.”

Going into recruiting. Which schools are showing interest?

“South Alabama, Lamar, Southern University, and Ole Miss – I went to one of their Junior Days; that was cool. FAU invited me, but that was cancelled and so did Western Kentucky.”

You mentioned visiting Ole Miss, have you taken any other visits?

“Louisiana Tech during the season and I went to ULL, Ole Miss, Vanderbilt, and Rutgers.”

How did the Louisiana Tech visit go?

“That went really well. Coach (Joe) Salone (OC) is a great guy. Hopefully we will keep in contact and see where that goes.”

And Ole Miss, how did that go?

“That went well. I was happy about that one. Kaidon Salter and I were there together. We met in the QB room with Coach (Lane) Kiffin (head coach) and their offensive coordinator, Coach (Jeff) Lebby. Coach Blake Gideon (special teams) invited me.”

What about the ULL visit?

“It went well. I like their facilities and coaching staff. I have a good history with them. My granddad was a QB and shortstop there; he was a team captain. ULL is like a second home to me.”

Are there any planned visits ahead?

“FAU, Lamar, and Arizona, I was going to do those three. Southern wants to get me on campus once everything opens up.”

Roman, thanks for your time today and good luck with your offseason workouts.