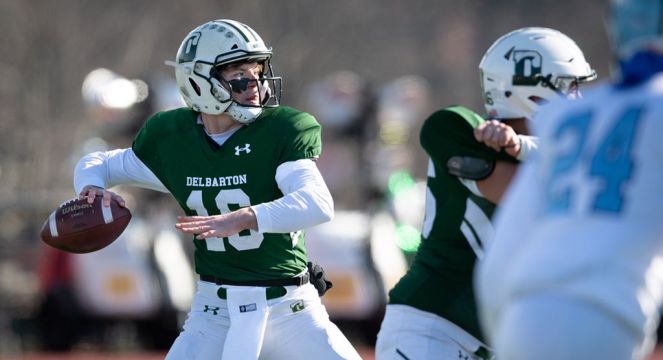 The play in the pocket continues to improve for Delbarton Class of 2021 quarterback Cole Freeman, and with that so does his interest among college staffs. The three-star quarterback put in another season of marked improvement in 2019 passing for 2,088 yards with 20 touchdowns and rushed for at least 253 yards with nine scores on the ground in a 6-4 season for his New Jersey squad. This comes after a 2018 campaign throwing for 1,737 yards and 15 touchdowns with a 61 percent completion rate and 123 rush yards with four trips into the end zone.

The offseason is here for the Green Wave shifting the focus for Freeman and company to take their game to the next level in preparation for another go at North Jersey competition. For an update on his season and his winter workout goals, I sat down for an interview coupled with QB Hit List.

Cole, the 2019 season was another big step forward in your evolution as a quarterback. From your vantage point, how did the season go for you personally?

“I think the season went really well for me individually and growing as a leader. We had a very young team this year, mostly underclassmen. We will take another big step next season and over the offseason.”

The stats show big improvements in productivity; what led to you producing more yards and more touchdowns?

“Our offense, as a whole, my receiver corps and my offensive line did a great job. We had great game plans by the coaches allowing my teammates and I to excel.”

This is one of my questions I like to ask. What was the biggest challenge you faced on the field this season?

“Good question. The toughest thing we faced as a team this year was finishing games and being able to step up. I learned a lot of lessons this season in that regard. In our losses, they came down to the last minute and on our offensive drives. They were close games and that taught me about stepping up when needed and fighting to make plays.”

How did you knowledge of the game improve this season over a year ago?

“Over the offseason I worked on the board with my QB coach. We went through coverages constantly and went over different concepts that were good for each coverage. Mentally, with the first season under my belt and a better understanding of defenses, and how to beat them, my knowledge as a quarterback grew a lot this season. Learning how to find the openings in the defenses helped.”

And the last in the improvement trilogy questions, how did your skills as a quarterback take a step forward?

“I worked on my mechanics throughout the offseason and played in 7v7 tournaments with my team every weekend. Working with my QB coach and the 7v7 tournaments on the weekends, that helped me to make sure my mechanics were improving. Overall, my arm strength definitely improved, my mobility in and outside the pocket improved, my ability to stay calm under pressure and throw on the run all improved as well.”

Which game did you turn in your top performance?

“Our Week 4 game against DePaul Catholic. It was a close game (won 39-37). With two seconds left in the fourth we blocked a field goal to go into overtime. We ended up winning in triple overtime. I threw two touchdowns in the first two frames and threw a 25-yard TD pass and ran in the two-point conversion for the win. I had three passing touchdowns and two rushing in that game.”

That qualifies. Which schools are now showing recruiting interest?

“Over the summer I visited a couple of places, those schools are still showing interest. Wake Forest is showing interest, Penn State, Syracuse, Princeton, and Cincinnati.”

Nice. Are you planning on taking any visits this offseason?

“I am planning on visiting Wake Forest and a few other schools, but I have no confirmed dates yet.”

What is your attack plan for the offseason?

“My main focus is my speed and my strength. I will be working out basically every day of the week doing explosive lifts, core work, and strengthening my legs – working on everything. I am getting ready for the spring and summer. I am working with my QB coach once a week, working on mechanics and footwork.”

Cole, it was great catching up with you after great season of hard work. Good luck with your offseason workouts.