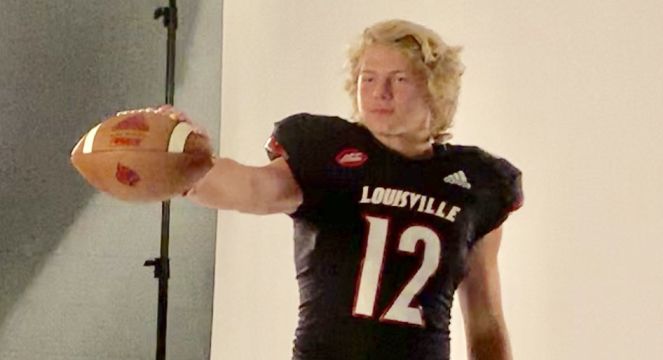 The move for Class of 2021 quarterback AJ Simpkins from Charlotte Christian to Hopewell High School paid off big dividends in 2019. The 6-3, 212-pound, quarterback showed he was a rising gunslinger against 4A North Carolina competition throwing for 2,206 yards with 16 touchdowns on the resume adding a rushing score. The three-star prospect took home team Offensive MVP and I-Meck All-Conference honors working with his new crew after the hard work on the field. Another notable achievement for Simpkins and the Titans, the Huntersville squad went from a winless team in 2018 to a four-win team under Simpkins leadership.

In an RNG first-look interview partnered with QB Hit List, Simpkins takes us inside the Titans QB room for a detailed conversation about his growth within the team’s Air Raid offense.

AJ, the 2019 season was a successful one for you personally and in a big way for the team. How did you rally the team around you after the Titans went winless in 2018 under a different starting quarterback to a four-win campaign?

“I can’t take all the credit. Everyone put in so much work. It was an attitude change for everyone. We convinced ourselves that we can compete. When we got that into our heads, we put our all into practice and it helped in the long run.”

As a new starting QB at Hopewell, how long did it take you to start clicking overall with the game, from the speed, the defenses, and the chemistry with your linemen and skill players?

“It was a big jump from 1A to 4A, that took me a little bit to adjust because of how much faster the competition is between those classifications. With my teammates, it was an instant click. It was very easy to get into the offense and befriend all my teammates. They were welcoming of me.”

What style of offense were you executing last season?

“At the beginning we were running a Gulf Coast offense, spreading the ball around the field and vertically attacking then switched to an Air Raid. After the first game we switched our offensive coordinators. As the season progressed, we went almost full Air Raid.”

Fill me in on a Gulf Coast offense.

“A Gulf Coast offense is what Florida State was running last year under Kendall Briles (current Arkansas Razorbacks OC). It is heavily reliant on choice routes, letting the receivers choose the route they will run.”

How were defenses lining up against the Titans’ offense a year ago?

“We got a lot of mixed defenses, a lot of Cover 4, they were concerned about our deep threats – Julian Gray could get down field, and we saw some Cover 7. The main thing we saw was Cover 4.”

For any given game, how did you prepare throughout the week?

“During the week at practice, we’d have an hour to an hour-and-a-half of watching film before practice. We’d break down plays and go against our scout team during practice. Outside of that, I would watch film by myself and meet up with my QB coach, Anthony Boone. I’d go to his house, we’d watch film, and we’d go in-depth on the defense. I’d do that twice a week leading up to the game.”

Watching game footage on you, there were a lot of great things happening for you. A couple of things that jumped out to me were your pre-snap reads and throwing your receiver open to a spot off that read with a quick release. What were some of the other areas of your game that developed greatly in 2019?

“I think you said it well. Last season I was a person that looked at the pre-snap reads for weaknesses. The film room helped a lot with that. Another thing was extending the play. In previous years, I was not as successful running the ball. My ability to throw on the run and keeping the play going after the play broke down were areas that improved a lot last season.”

You just touched on this. There may not have been a lot of opportunities for you to run within the offense a year ago, but when you did take off you were covering ground. How did that part of your game improve last year?

“When I was at Christian, I did not run at all. I was quite slow. Me running the ball was not a common occurrence. I spent a lot of time working on my speed in the offseason. That helped me be able to carry out those plays where the pocket broke down.”

Are you guys doing anything differently with the offense in 2020?

“Not too much different. We are taking a few plays out, some that were not being used. We are sticking to the Air Raid concepts, Y Cross and Y Sail.”

Since the season ended, what have you been working on with your mechanics?

“What have I not worked on. Everything needs to be improved. The main priority is my front leg, I have a tendency to straight it out which makes me sail it every once in a while. I have to keep that bend in my knee, that will make me more accurate and consistent with my passes.”

Over that same time period, how have you expanded your knowledge of the game?

“I am always in the film room. This offseason I have gone through each game 10 times each. About 10 hours per week I am breaking down plays and games. I am always trying to expand my knowledge of the game and of our opponents.”

Let’s get into some recruiting. Which schools are showing interest as we near the 2020 season?

Going back to last season, did you take any unofficial visits?

As your most recent, how did the N.C. State Junior Day visit go?

“It went well. I met Tim Beck (OC/QB) for the first time. Our communication did not last long, after they got a commit.”

And the Louisville visit?

“That was good. I have been in communication with Louisville since the summer going into my junior year. I went to their Saturday Night Live event, a showcase for invites only. They are the ones most heavily interested in me.”

When the campuses open up, are there any trips you may take?

“This summer, I plan to head up to Kent State, Harvard, and probably back to Elon and Louisville for an unofficial visit; I have been to Louisville a few times now. I was looking forward to being there for one of their spring practices to be in the film room with Coach (Frank) Ponce (QB), but that was cancelled.”

AJ, it was fun covering ground with you today. I appreciate your time and wish you and your teammates success this summer preparing for the 2020 season.