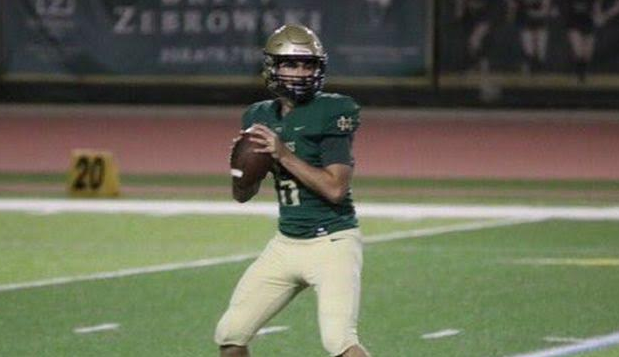 The 2019 season was truly a breakout year for Class of 2021 quarterback Sam Whitney. During his first season playing varsity football with Mira Costa, Whitney (6-0, 170) earned All-League and League Offensive Player of the Year honors after throwing for 2,978 yards with 30 touchdowns. The true student-athlete also excels in the classroom where he sports a 3.9 cumulative GPA and scores a 1540 on the SAT. His play and scholastic abilities are already drawing an Ivy League crowd.

In an RNG exclusive interview partnered with QB Hit List, Whitney goes in-depth on his fantastic junior campaign with the Mustangs with an update on his offseason workouts.

Sam, the Mustangs had a successful 2019 season making a run into the playoffs while putting up 32 points per game. As a leader on the team, how did you pull the guys together throughout the season to keep producing at a high level?

“We stayed focus in practice and worked hard continuing to get better each week. We had a good game plan each week.”

As mentioned, you guys were putting up points on the board. What was working for you as a QB allowing to the big season of nearly 3,000 passing yards?

What were some of the routes you were hitting in the Mustangs’ Spread?

“We ran the whole route tree, a lot of outs, comebacks, and posts. With some of the shorter stuff, slants and hitches.”

Which areas of your game maybe were weaknesses or not as strong at the start of the schedule but by the end of the year were things you were doing well?

“The main thing was getting comfortable in the offense. At the beginning of the season I was still getting used to the varsity level. I made some mistakes and then I was able to go out and make plays.”

How did you approach each game from a mental preparation standpoint?

“I worked hard all week in practice to the point where I knew I was ready. I knew all the plays and all the checks going into the game.”

Which game was your best personal performance?

“I’d say the last game of the regular season against Redondo Union. There was a playoff spot for whoever won. I had 400 yards passing and four touchdowns.”

Off the season you turned in, are you receiving any recruiting interest?

“I’m receiving some Ivy League interest, from teams like Yale, Dartmouth, and Princeton, and some D-III interests.”

Have you taken any unofficial visits over the last few months?

“I took one to Washington and Princeton.”

How did the Washington trip go?

“It was great. Washington has a cool campus. I got to see a game. It was cool.”

And Princeton, how did that trip go?

“That as great too. I got to see their facilities and I got to see what everything is like leading up to a game.”

Are you competing at any camps this spring?

“Yes. I am going to the Elite 11 Regional in March and hopefully the Rivals camp too.”

Which parts of your technique are you working on this offseason?

“I’m working on my footwork, getting better drops, and I want to give myself a better opportunity to move well in the pocket. I am working on my throwing motion to improve my accuracy and arm strength.”

What do you want to accomplish over the winter and spring months before summer ball begins?

“I want to continue to get bigger and stronger, and I want to get some exposure at the camps.”

Sam, it was great getting time in with you today. Good luck with your offseason workouts going into the camp season.