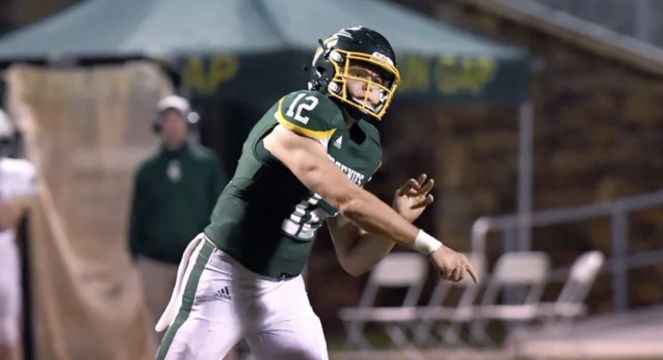 Leave it up to Class of 2022 quarterback AJ Simpkins to be the difference maker. The 6-4, 215-pound, gunslinger went to town with Christ School during the 2020 season leading the state in in passing yards, completion percentage, and QB Rating. Hitting 69 percent of his passes for 1,888 yards with 19 touchdowns translated to a state championship for Christ School, the first state championship in Christ School’s history.

The yards put up by Simpkins in the Greenies’ eight-game schedule was not surprising. During his 2019 campaign with Hopewell High School, the QB Hit List three-star prospect threw for 2,206 yards with 16 touchdowns earning MECK All-Conference honors. With the play on the field and reclassifying to the 2022 class, college programs are honing in on Simpkins.

For an update on the title run and rise in recruiting attention, Simpkins sat down for another detailed RNG confab.

It went great. I ended up leading the state in passing yards, QBR (QB Rating), and completion percentage. We won state as well. I threw for over 1,800 yards in eight tames games, almost 1,900, completing 69 percent of my passes with a 129.9 QBR.

That fantastic. Have they released any postseason honors in North Carolina?

The only one that I know of, I was runner-up in the Charlotte Observer Heisman. That is the private school’s best player of the year award. I was runner-up to Charlotte Christian’s running back Henry Rutledge.

What style of offense were you executing this season with Christ School?

It was a similar offense. Our offensive coordinator was a receiver for the Eagles. He loved passing the ball. Guessing we were 65-35 pass to run. We really liked to throw the ball. It was still Air-Raid like.

Which routes were you connecting on within the offense?

When you were dropping back, what coverages were you seeing?

With the experience gained, which areas of your skillset as a QB improved the most?

Going into the offseason, what will you focus on with your technique for the 2021 run?

I am focusing heavily on getting faster and getting my time down into the 4.6 range. In 2021, I want to move around more and make teams worry about me running the ball. I want to keep them on their toes. My accuracy and making the right reads are two other things I will work on. I am already working hard on getting my speed up this offseason.

What have you been doing to increase your velocity and accuracy on your passes?

Right now, I am doing a lot of lifting and speed training. I am lifting every day and doing speed workouts four times a week and running daily.

What are some of the ways you will work on expanding your football IQ in the coming months?

How are you planning on staying sharp during the offseason? Are you going to camps or playing 7v7?

Yes, I am playing 7v7 for the Carolina Stars. We have a tourney in Florida. If we have camps, I’d love to get out to some. I’d love to get in front of these coaches and let them see me live.

In addition to working hard on the field, you also hit the books with the same determination. What is your current cumulative GPA?

A 4.6. I have been working hard this year on getting my grades as great as possible to keep all my opportunities open.

Are you going to play any other varsity sports this year for Christ School?

As of right now no. But I am thinking about playing baseball or running track. I am just lifting for now and doing workouts at school.

Let’s close with an update on recruiting. Which schools are showing interest after the 2020 season produced?

I am going back and forth with Columbia and Harvard. I am receiving interest from Austin Peay and Tulane. Virginia Tech is still talking with me a lot. And Louisville, I am talking to them every once in a while.

When you get the chance, which schools might you go visits in 2021?

I am planning on seeing Harvard and Columbia in one trip. That is all I have planned as of right now.

AJ, it was great getting time in with you today. Good luck with your offseason workouts preparing for another North Carolina state championship in 2021.