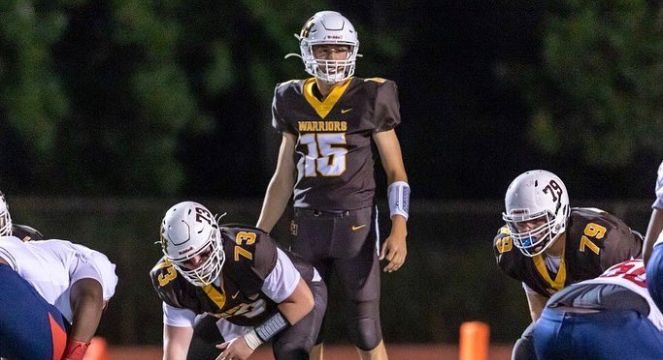 The growth and maturation on the field for Class of 2021 quarterback Chad Martini is peaking at the correct time. The 6-6, 215-pound, pro-style quarterback, who has wheels and an elite arm, is coming into his own as an all-around field general. Running a balanced offense with Watchung Hills Regional a year ago, Martini slung the pigskin for 1,544 yards with nine scores in 10 games while adding six rushing touchdowns. The Warriors’ offense in 2020 against New Jersey foes is expected to open up more for Martini, and that includes the ability to further showcase his skills as a dual-threat. The new opportunities will help expand the three-star recruit’s offers from Cornell and Long Island University.

With the 2020 season set to kickoff on Friday, Oct. 2, Martini sat down for an in-depth one-on-one covering ground on his offseason workouts and recruiting.

Chad, the first game of the 2020 season is set for Friday, Oct 2, against North Hunterdon. How excited is everyone on the team to get this football season going?

To prepare for your senior season, what technical parts of your game did you focus on over the offseason?

The biggest part that I focused on was my leg strength and footwork. A lot of coaches say, “we think you are a great player, but there are flaws in footwork.” This offseason I have been working with my quarterback on my footwork. I have been mastering that. I have been working out three times a week at Test Fitness, a lot of NFL guys in there. They know what they are doing, they are top notch.

You have a gun for an arm and can get the ball downfield on the line in a hurry. When you ended your junior season with the Warriors, what did you feel were some of the other strengths to your game?

I felt some of the other strengths was keeping the play alive, I was rolling out finding people down field. My IQ separates me from others. I have a really good feel for the game, I am good at reading defenses, and I am good at checking out of plays. My arm power is a strength. My deep ball is really good and accurate.

Yes, it is. How did you work over the spring and summer months to expand your football IQ?

One thing, I was talking to a lot of college coaches this summer on Zoom and phone calls. We were talking plays and defenses. I watch a lot of NFL games looking at their plays so we can implement them into our offense. Our offensive coordinator is a great guy, he is always down to talk about plays with me.

When you roll out, especially to your right, you have that shortstop release in your toolbelt. What style of offense are you guys running and how does the offense fit your skills to do those things?

Our offense is under center, in gun, and we have a lot of motion, we have a lot of everything. We are balanced. It is harder for the defense to defend us because they are not knowing what to expect. We have a lot of bootleg plays too. Many people think I am a typical pocket passer because of my height, but I have improved on the run and throwing on the run. We have bootlegs and rollouts which are great.

What are some of the routes you are throwing to within the scheme?

We have about every route in the tree: posts, hitches, curls, comebacks, 10-yard hitches, outs, slants – pretty much everything, backside digs, fade routes, everything.

Having gone through fall camp with team, where are you showing the biggest overall improvements?

Two categories; one is my leadership. I have always been a leader on the team. My coach has considered me a captain for four years now. Going through tough times with the virus, being a leader and being positive for my team is important. The other improvement is my ability to run. Last year we did not run with me much. We were trying to not get me hurt. I have put on weight this offseason which will help. We had a scrimmage yesterday (Thursday), I ran the ball well and I was comfortable.

Let’s dig into recruiting. Which schools are showing interest ahead of the 2020 season?

I am receiving interest from Patriot and Ivy League schools. I got an offer from Long Island and Cornell is showing a lot of interest.

*Cornell offered after this interview was conducted

You have the offer from LIU, when did they offer you?

Long Island University offered about three or four weeks ago.

What was it like for you getting that first college football offer?

It was a great feeling. It feels really good that there is a school out there and people out there that believe in you. It caught me by surprised when it happened. I was in shock. I may have been in class when I got a text from their coach asking me to call him. I called, and he said, “We’d like to offer you. We like your abilities.” It was a great feeling.

Before the campuses were closed for visits, did you get to take any unofficial visits?

Yes. Last November I went to Buffalo for a game.

Have you taken any virtual visits?

Yes. I hoped on a Zoom with Cornell.

What did they show you and/or talk about during the visit?

They told me about the school and their buildings. I did the same with Columbia. He took us on a virtual tour of the campus, facilities, and all that.

If visits were allowed next week, are there any schools you’d like to visit in-person?

Definitely. I’d love to check out LIU and Cornell. I want to meet the staff at LIU, check that out, and they are close too. The same with Cornell.

Do you compete in any other sports for the Warriors?

Yes, I play basketball. I’ve been a starter since my freshman year on varsity. I am an 800-point scorer, this year I am hoping to get to 1,000.

Very cool. With the Ivy League attention comes hard work in the classroom. What is your cumulative GPA?

Did you get an SAT and/or ACT in before the spring time?

Yes. I took the SAT, although I was not really prepared for it and it was my first time. I scored an 1170.

Last question. What goals have you set for your senior season?

One goal with my one of my receivers; a few years back one of our receivers set the record for most receiving yards. He went over 1,000 yards. We want to beat that. That goal will be harder to do with a shortened season, but we’d love to achieve that. The main goal is to make the playoffs. We were 5-5 last year and 0-10 the year before. I want us to keep showing improvement, the improvement we’ve shown from last year and the year before. I want to leave the program on a good note.

Chad, it was a lot of fun learning more about you and your game today. Wishing you and the team a successful 2020 season until we talk again.