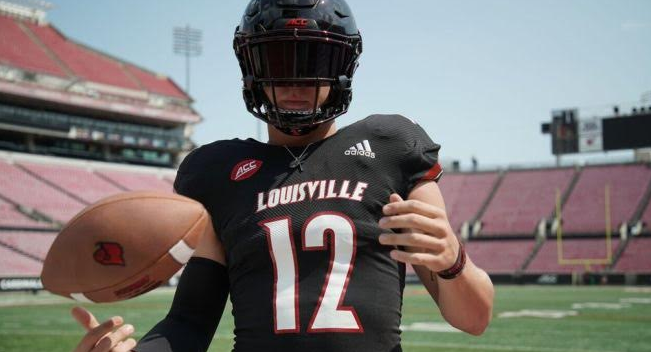 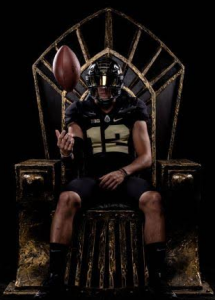 The heat coming out of the great state of Arizona in 2018 from the late summer months on into December pushing away winter temperatures can be directly linked to the energy generated by Class of 2020 Perry High School quarterback Chubba Purdy. The dual-threat turned in a masterful performance working 6A Arizona defenses like a seasoned veteran, and the scary thing for the teams in the area for the 2019 season – the four-star recruit is just getting started.

With the matriculation of brother Brock Prudy to Iowa State, the 2018 season was Chubba’s to sink or swim in his first season directing the Pumas offense as a starter. The production was Michael Phelps-esq completing 64 percent of his passes for 3,422 yards with 36 touchdowns tossed. As mentioned, the 6-3, 210-pound, gun slinger can also tote the rock, and really well, covering 1,156 yards off 137 carries going into the end zone 23 times. His play caught All-State honors as the Pumas rolled into the championship game posting an 11-3 record and end of season No. 3 in-state ranking.

With one official visit taken to Louisville and an impressive offseason of work underway that includes posting a 4.42 40-yard dash, it was time to team up with QB Hit List for an RNG exclusive interview with Chubba Purdy.

Chubba, the Pumas’ offense was about as lethal as an offense can be during the 2018 season going for 47 points per game. What was clicking for the offense making you guys so productive?

“Me and my offense we were elusive and worked hard all week throughout the season. I was trying to be a great leader for my team; last season was my first year starting varsity. We put it all together and balled out.”

The 2018 season was your season to shine with a breakout performance. What was that first game like for you taking the field as the leader of the offense?

“The first game against Pinnacle was crazy against (lost 59-33). It was packed. We were playing against a great team in Pinnacle. We made some mistakes in the beginning, but then we got better. We played that same team in the playoffs and smacked them (won 45-14).”

Was there a point during the season where everything started to click for you, the game slowed down, and you felt completely in charge of the offense and the flow of the game?

“Yes, sir. The third game of the year against Red Mountain. After that I really started clicking going into our fourth game against O’Connor. We all started getting each other’s chemistry. All the puzzle pieces were coming together. I was connecting with my receivers and the halfbacks and offensive linemen were doing really well. We kept moving forward.”

Your footspeed on running plays is impressive. What is the fastest timed run you have posted?

Wow. Where did you lay that down?

“At school on our track.”

How did you develop your running speed and style leading into your junior season?

“My running speed has always been with me. I do box jumps. I work on my legs to be more explosive. During practice I would work on my running. I only ran a 4.6 last year, I have improved upon my speed this offseason.”

Even more dangerous. I like it. You have really nice touch on your long passes, what are some of the other strengths to your game as a quarterback?

“Making my progressions with my reads. If the deep ball is not there, I move down. I go through my check downs.”

How did spring ball with the Pumas go?

“Spring ball… in the beginning it was good but not great. All the younger receivers and halfbacks and the linemen, we started putting it together. The last week of spring practice was great.”

What have you been working on with your mechanics this offseason?

“This offseason, my release is quick but I am trying to make it quicker. I have put a lot of work into my footwork and my quick game. I have been working on everything this offseason.”

Your talent has attracted a lot of recruiting attention. How many offers do you have now?

Nice. Which schools are showing interest in you but have not offered yet?

“Baylor and Alabama. Alabama has been showing a lot of interest.”

Have you taken any unofficial or official visits this offseason?

“This summer I took my first official to Louisville and an unofficial to Purdue.”

How did the official to Louisville go?

“It was amazing. It was great. The coaches were awesome. I have a great relationship with Coach (Frank) Ponce (QB) and with Coach (Scott) Satterfield (head coach). Coach Ponce always hits me up. The whole staff was amazing.”

And the Purdue visit, if you will, tell me about that one?

“Purdue was a great visit. My parents and I felt at home. We were blown away by the campus and coaches. The coaches were amazing, they are genuine. Brian Brohm (QB) knows what his talking about. Head coach (Jeff) Brohm was going over plays with me, they are geniuses.”

Do you have any planned visits coming up this summer?

“Yes, sir. I am going to Kansas, Kansas State and Michigan State for unofficial visits.”

With the recruiting process, what is the most important aspect of breaking down a school as you weigh the options of each offer?

“What I evaluate is, is it a college town, my relationship with coaches, and what the QB room looks like – what year the quarterback graduate and when I can play.”

Have you started looking at a commitment date?

“I may commit towards the end of summer or at the beginning of the school year. I have not decided when I am going to commit yet.

Chubba, it was great spending time with you today going over your skills on the field and recruiting. I appreciate it.