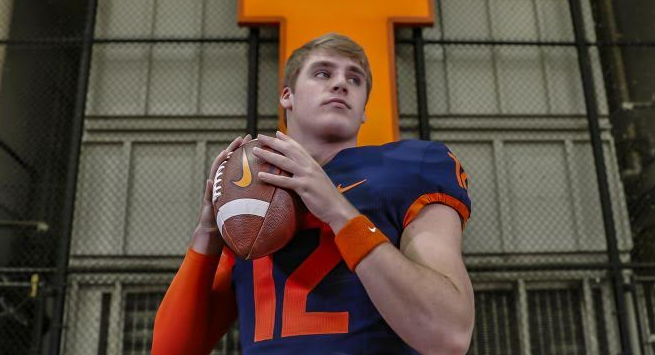 There are truly very few high school quarterbacks who have it all – the size, speed, arm strength, decision-making, and football IQ to be a five-tool player, but Hampton “Hamp” Fay does. Fay broke through during his sophomore season with 5A Texas state champs Aledo as a quarterback/receiver and started forging his path forward as a four-star during the 2019 campaign as a quarterback with All Saints Episcopal. A shoulder injury derailed what would have been an All-State worthy season, but all the tools were on display as a next level program-changer.

College coaches looking for an athletic presence in the pocket, Fay has you covered. At 6-5, 220-pounds, Fay can move in space with the best of them and can outrun just about all of them on the other side of the line of scrimmage. As a sophomore, when Fay was not slinging the pigskin, he was starting for the Bearcats at receiver pulling down 21 passes for 402 yards with four trips into the end zone aiding in Aledo’s 16-0 run. At quarterback, he connected on 16 pass attempts for 178 yards and rushed 11 times for 76 more showing a glimpse of what was to come.

The 2019 season with All Saints Episcopal started out hot on pace to throw for 3,380 yards with 40 touchdowns while compiling 540 yards on the ground with eight more scores in a 12-game season. After three games, Fay had hit 64 of 91 passes for 845 yards with 10 touchdowns and rushed 25 times for 135 more yards posting two additional scores on the board. Then, a backside labrum injury on a running play prematurely ended what was the beginning of something amazing. Recovered from the injury and throwing already, Fay is out to show the seven schools that have offered him and all the others interested that he is that difference maker for a top Division I program.

In an RNG exclusive interview, I sat down with one of the top gunslingers in the 2021 class learning more about his talents on the field and his recruiting process of it.

Hamp, all the skills at your disposal in the pocket makes you an extremely dangerous quarterback to play against. In your opinion, what is the most dangerous aspect to your game for opposing defenses?

“I’d think my decision making is the most important. It is good to have size and speed, but it comes down to can you deliver the ball to right person at right time? I study defenses hard and I work with my guys and coaches on what is the best play to run against the defenses. That is the biggest role for me, my decision making. I come with all the bells and whistles but my decision-making sets me apart.”

“I have played quarterback and baseball all my life. Working with my dad and grandpa, both former quarterbacks, and a local QB coach – I spend a lot of time with him, they have all helped develop me making sure I am not pushing it but conditioning it.”

Covering your arm strength, doing long toss with a knee down how far are you throwing the ball?

Another big part of your game is your wheels. I’m guessing your speed shocks defenders at first underestimating you. How fast are you?

“On a hand-timed run last summer before two-a-days, I clocked at 4.68. I have not done a laser-time since my freshman year, that was a 4.8 then.”

The arm talent and ability to break long runs are impressive, but so is your work within the scheme looking off safeties and going through your progressions as you move inside and outside the pocket. How have you developed your pocket awareness, not only looking downfield so your receivers can make a play but also knowing when to tuck it and run?

“It all starts knowing the protections and where the pressure is coming from. Knowing I am protected, I understand when to sit in the pocket. If I have a blitz coming, I’m thinking hot, get rid of it, or scramble and make a play. That is part of the decision-making process. I am smart with the ball and know where the blitzes and protections are on each play.”

Which areas of your game showed the biggest improvements in 2019?

“The biggest thing I’d say would be using my eyes. The first game and during our scrimmage, I was not using my eyes as much as I should have been. Defenses were jumping on the routes. Then I was manipulating defenses with my eyes. There are 100 things I can improve on. Going forward after using my eyes, the decision-making process, staying in the pocket and everything else was working smoothly.”

You’ve touched on this a little, what are you working on this offseason?

“Being able to keep my eyes downfield when scrambling, extending plays, keeping my injury risk low and learn how to slide –

You mean no more hurdling over guys?

(Laughs) “Yes.” – And working around the pocket more while looking downfield.”

All the skills have attracted offers, how many are you holding?

“Boston College, Yale, West Virginia, Iowa called the other day, and North Texas – the schools I am listing are the ones that have reached out over the last couple of days.”

From the fall up to now, have you taken any unofficial visits?

“Last fall I visited Illinois, I saw a game at Rice and Texas State, and I went to Stanford for a game.”

Are there any planned visits on the schedule coming up?

“Yes. We don’t have set dates yet, but I will more than likely visit the schools that have offered. This weekend, we are going to Houston for their Junior Day. Pitt, Michigan State, and Princeton are some of the other visits I will take. There are more but that is all I can think of right now.”

Going into the classroom, do you have a cumulative GPA you don’t mind sharing?

Have you taken the ACT and/or the SAT yet?

“I have taken the ACT; I scored a 22 but I did that a couple of days after I had surgery. I had surgery on a Wednesday and I took the ACT on that Saturday. I’m not sure how I did that.”

Impressive yet again. Are you competing in any other sports for All Saints?

“This is the first year I am not playing baseball, but I am running track.”

Which events are you competing in this year?

“Last year, I was at a different school. They made us do whatever needed for the team. I was in the hurdles last year. This year, I am running the 100, 200, and possibly the 4×4. I want to stay loose and keep my speed up. I want to compete with all the other guys.”

Hamp, it was great getting time in with you today. Wishing you success with your offseason workouts and visits until we talk again.