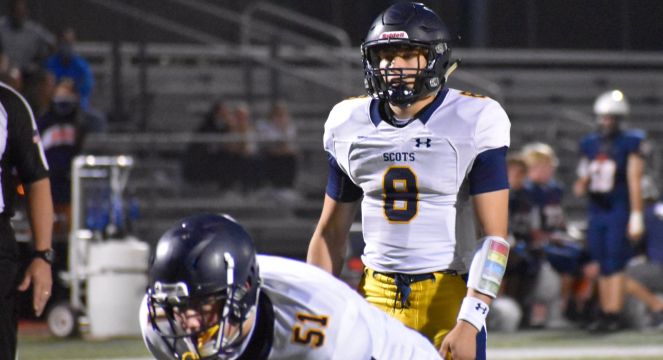 Highland Park High School’s offense was prolific throughout the 2020 season laying it on opposing Texas squads for 40.5 points per game on average. The Scots posted an 11-1 record with a four-game march into the postseason. The squad is seeing senior Brayden Schager matriculate to the University of Hawaii, but have an amazing talent ready to fully take over the reigns in Class of 2023 gunslinger Brennan Storer (5-11, 185). With the pigskin in Storer’s hands, there seemingly is not a Saturday or Sunday throw he can’t make or a window he can’t zip it through. The four-star QB Hit List recruit has offers on the table from Kansas, Texas State, Kent State, and Illinois State with programs ready to see him during camp season along with his junior film.

In RNG update interview, Storer goes down the list of questions on his 2020 season, workouts this winter, and growing recruiting process.

Dylan, again, wow with the arm strength just ripping it. But you also got to show off the wheels again. The 2020 season in totality, how did you tie in all the talents to become an even more dangerous quarterback?

This season it was more about learning the system, watching film, and getting my reads down so I can just execute either with my arm or my legs.

Given that you can make every throw on the field, how were teams coming at you and covering your receivers this season?

Definitely played more pass first and run second, but we’re fortunate to have so much talent that if they take away one option there are always others that are equally dangerous. My offensive line is insane, and we have some very talented running backs as well as receivers.

How did you prepare for each game during the season?

Film and more film. This year I got a chance to really soak it all in and learn. I got to play behind Brayden Schager who is going to play at Hawaii this year. He is a three-star, but in my opinion should have been rated a lot higher because he can really spin it. Hawaii is going to put up some big numbers with Brayden.

What were some of the things you learned during your sophomore season that helped you with your pre- and post-snap reads to better deliver the ball to your receiving corps?

I already knew the obvious pre-read stuff, but this year it was all about learning all the plays and read assignments. Our head coach (Randy Allen) is an offensive genius and the playbook is big.

In which game did you turn in your best performance of the season?

Hopefully all of them. I really just focus on doing my job and getting the “W”.

What did you do well in all those games to make them your best?

Probably extending plays and, if I needed to, using my feet to get the yards.

What do you now feel are the strengths to your skills as a quarterback?

Getting the ball out quick and extending plays when I need to.

What have you been working on this offseason with your fundamentals?

Will there be any changes to the offense for the 2021 season you are preparing for this spring?

There are always changes. Our coaches keep everyone on their toes.

Are there any camps coming up you may attend, college or national?

Which programs are showing interest but have not offered yet?

I have a good number but would rather not say until they do offer.

Visits are expected to start back up in June. If that comes to pass, which programs might you check out?

I am still working that out.

Brennan, thanks for your time today. Good luck with your offseason workouts until we talk again.