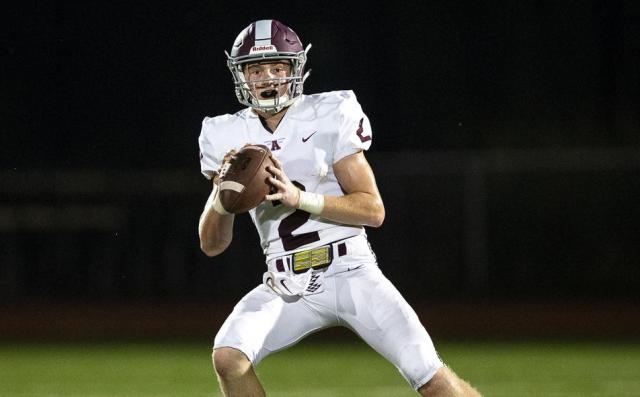 Whichever college football program that lands three-star Class of 2021 quarterback Charles Wright is not only getting a play-maker but also getting a leader with years of meaningful experience. Wright (6-1, 193) has been on the Texas 6A varsity scene since his freshman season picking apart defenses for Austin High School. That experience and talent has landed offers from Iowa State and Texas-San Antonio with interest rising.

During the 2017 season, Wright did not perform like a freshman when called upon to lead the Maroons offense. He completed 27 of 36 passes for 408 yards with four touchdowns avoiding a pick. Fully taking over the reigns as a sophomore, he hit 276 of 450 attempts for 2,862 yards with 26 scores while rushing for 177 yards with seven trips into the end zone. The 10-game 2019 schedule was a similar performance connecting on 206 of 371 attempts for 2,520 yards with 27 touchdowns while rushing for another 113 yards with one more score earning first team All-District, Team MVP, and Academic All-District honors.

In an RNG exclusive interview partnered with QB Hit List, I sat down with one of Texas’ top 2021 quarterbacks going in-depth on his talents in the pocket with an update on his recruiting opportunities.

Charles, at this point in your career you are a grizzled veteran having played against 6A Texas teams since your freshman season. Given all the experience you had already gained, what were some of the things you learned during the 2019 schedule that helped you grow as a quarterback?

“For me, having a young team, we were able to have a lot of success on offense. With the new players on the team, I created new bonds. That made me grow as a player and was beneficial for me. We grew throughout the season, while making mistakes, but that will be beneficial for me in my senior season.”

The arm strength is obviously there, what do you feel are some of the other strengths to your game as a quarterback?

“My intermediate throws are something I pride myself; out routes, hitches, and slants. My accuracy has improved especially since my freshman year. How I check plays at line of scrimmage and my ability to read defenses are strengths to my game.”

Which offensive set are you guys running?

How are defenses lining up trying to slow you down?

“I’m seeing mostly Cover 2, they are dropping a linebacker. We had a dynamic back in Grayson Davis. That was a tricky part for defenses knowing we had a dominating run and passing game.”

As a passing QB, how did your game improve during your junior season?

“I learned a lot more about defenses and the way they disguise coverages. You don’t see that much disusing of defenses in high school ball, but Texas 6A defenses do. They throw a lot at you. That helped me grow. It is fun to be thrown those tasks and exploit them.”

All players experience some form of adversity during the season. What adversity or challenge did you face in 2019?

“That’s a big question. The week before our first game, I had a virus. We did not know what it was at that time. I practiced with a 103 fever. The week of the game, I was throwing in practice, sweating more than usual. I threw up during practice, and was eventually told to go home. A couple of hours later I was in the hospital and on an IV. I was given the medicine and went home. Following that, I was in and out of school that week trying to make as many meetings.

“Come Friday, I was on an IV three hours before the game (vs. Pflugerville Connally). I started the game and we won 51-49. The following week, I still had the same sickness. I had muscle cramps at halftime in that game (Round Rock Westwood). I also had an ankle injury this year. I think what I went through shows how much I love my team and that I am willing to go the whole nine yards to win a football game.”

It sure does. Of all the games played, which was your best personal performance in 2019?

“I would say the first two games of the season were great games. I was sick but able to perform with my stats and leadership. The ninth game of the season, we played really well as a team. We beat Bowie (28-26) for first time in 10 years. That was a huge win for us.”

You have offers from Iowa State and Texas-San Antonio, which other schools are showing interest?

Did you visit any schools during the season?

“Yes. I visited two schools this season. I wanted to prioritize offers first. I visited Iowa State for the Texas game and I visited UTSA for their game against Army. I also visited Texas twice for two games.”

How did the Iowa State trip go?

“It was phenomenal. The coaching staff is out of the world; great people and great coaches. They have a great team with great facilities. Iowa State is a great place all around. The fans and locals were very welcoming. They talk great about the school. That was a great experience.”

And the UTSA visit?

“It was great. All the coaches there are great people. They understood I had a game the night before. I was able to talk to them. We have a great relationship. It meant a lot that they trusted me with their program extending the offer.”

And the hometown visits to Texas, how did that go?

“They were great. The coaching staff is great there and they have out of this world facilities. Being a hometown guy, it was cool to visit there. It was a great experience.”

Are you going to any national camps and/or combines coming up?

Last question for you. Focusing on your technique, what will you work on this offseason before entering your senior season?

Charles, it was fantastic covering ground with you today. I appreciate it and wish you the best of luck at all the upcoming camps.