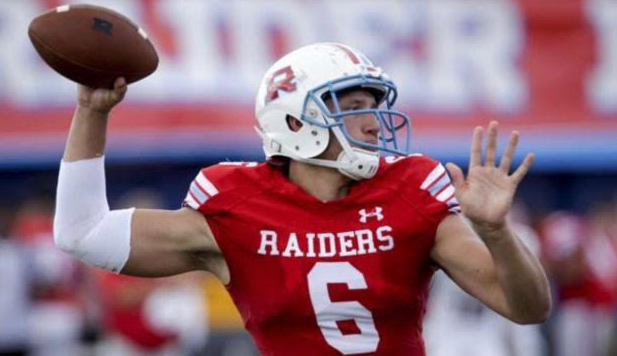 Watching game film on Kyle Wickersham, it does not take but two maybe three plays to realize how special a talent he is at quarterback. At 6-3, 224-pounds, Wickersham has that NFL arm college coaches covet able to sling the ball anywhere on the field and on a line. In Wickersham’s first season starting at the varsity level, he blew away the competition with Archbishop Rummel leading the Raiders on a 13-0 season hoisting a 5A Louisiana trophy after a 14-10 win over Baton Rouge-Catholic. In a run-first offense, Wickersham connected on 60 percent of his passes for 1,620 yards with 14 touchdowns and rushed for another 194 with five trips into the end zone.

Collegiate teams are just now starting to learn about Wickersham and what he can do with the pigskin in his hands. An offer has been dropped by Nicholls State and schools in the SEC and Pac-12 are taking notice.

In an RNG exclusive interview partnered with QB Hit List, I sat down with the rising three-star Class of 2021 recruit to learn more about his game, skills, and impressive arm talent.

Kyle, congratulations on capturing a Louisiana state title this season with your teammates.

When the game was officially in the books and you guys had taken down (Baton Rouge) Catholic 14-10, what was that moment like for you?

“It was surreal. This was my first time playing QB. To know we went undefeated and won a championship, it was a dream come true for me and my teammates. Winning with those guys was special.”

The Raiders were tested every step of the way during the playoffs. How did you raise your game to another level when it counted most?

“With the support of my teammates and the coaches. My coaches were calming down in stressful situations. I have played better under pressure this season; the instincts take over. I am reacting and not thinking. We had countless meetings starting at 6:30 a.m. putting a perfect game plan together. The receivers and I were staying after practice getting everything down, and I was watching film on my own time. Everyone wanted to win so badly, everything was stepped up a notch.”

Not the first time you’ve heard this, but you have an impressive arm and you throw it on a rope. Have you cracked any receiver’s fingers or had any request to take some heat off your fastball coming out of the pocket?

(Laughs) “During the offseason, I broke five different guys’ fingers including defensive backs. I split my dad’s finger one time; he was wearing a ring. He needed stiches.”

Since you can sling it anywhere on the field, what were some of the routes called by the offensive coordinator this season?

“We call a lot of corner routes to the opposite side and outs on the opposite side of the field. The coaches did a good job of controlling the offense this year. We did not take that many shots, we had a great defense. We ran time off the clock and controlled the game. We took some deep shots but we mainly kept it short with RPOs and stuff like that.”

Which areas of your game showed the most growth during your junior year?

“My pocket presence showed the most improvement. Early in the season when guys were coming, I would roll out. As the season went on, I stepped up in the pocket and continued my reads. Find my third and fourth progressions, that helped in the playoffs.”

In which game were you able to put it all together for your top performance of the season?

What did you do well against St. Augustine to make that your best game?

“I was able to scramble out of the pocket finding our receivers downfield. I was able to fit balls into tight windows. I was good about keeping the chains moving, checking down, and not turning the ball over.”

Is there an area of your game that does not get the attention deserved?

“My running, for sure. A lot of my runs were on third and short, and we would go straight through the middle. They joke around with me saying I look like a linebacker back there trying to run over someone. That part of my game does not show up on the stat sheet.”

Preparing for our interview, I saw that you have an offer from Nicholls State, which other schools are showing interest?

“I have a ton of schools emailing and calling, Washington State, Arizona State, Arizona, LSU – where my dad played, Ole Miss, Kentucky, and Rice.”

When did your day play for LSU?

“My dad played quarterback for LSU from 1982-85. He started for three years there.”

During the season, did you take any unofficial visits?

“Yes, sir. I went to LSU a couple of times. I was going to take others, but as the season got serious, I focused on the team.”

Understandable. How have the visit to LSU gone overall?

“LSU is an amazing place. They treat my dad like a king there, which is funny. My sister plays softball there. When we go, they invite the whole family. It is nice to watch LSU play. It is a cool experience.”

You mentioned you were going to take some visits but held off during the season. Which schools might you visit coming up?

Last question. After some time to rest your body, when you pick up your offseason workouts what will you focus on with your technique?

“The focus will be on my footwork, dropping further back, and reading the field a lot quicker. We ran RPOs during the season, I did not work on my footwork as much. We will not have the same personnel next year; I will have more drop-backs next year.”

Kyle, thanks for your time today and good luck with your workouts over the winter.