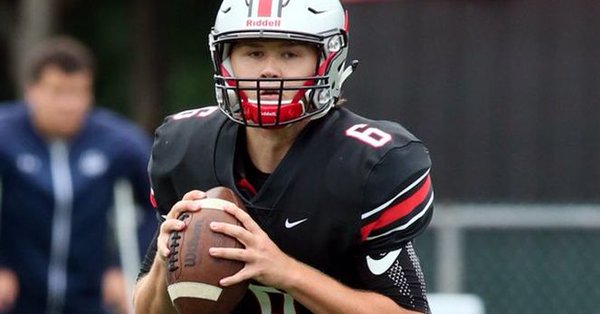 The varsity snaps Logan Clouse got as a freshman and sophomore with West Morris Mendham High School during the 2016-17 seasons made for an easy transition during the 2018 schedule. The 6-2.5, 205-pound, quarterback walked onto the campus at Hun School in Princeton (NJ) like the season veteran he is guiding the Raiders to a 7-1 season in the Mid-Atlantic Prep League. The three-star quarterback was on point covering 1,300 yards with 11 touchdowns against just one pick with his new squad. Clouse’s talent as a field general has led to offers from Bucknell, Eastern Kentucky, and Morehead State with interest coming in and more college football camps on the schedule this summer giving opportunities for his offer sheet to grow.

In an RNG exclusive interview partnered with QB Hit List, I sat down with one of the top gunslingers in the northeast to learn more about his approach and talents to the game and got a quick update on an impressive camp circuit scheduled.

Logan, the Raiders’ offense was humming along last season putting up 33 a game. As the leader of the offense, what was working so well for you and that side of the ball allowing the team to be so productive?

“For me, I was surrounded by great talent and a great coach. My running back was a four-star, I had a 3-star tight end who signed with Virginia Tech, and a left tackle that signed with Penn State. I was getting the ball to my playmakers and making sure the offense ran smoothly. I was listening to my coaches and leaning on the guys on the team. They were older, they helped me out a lot. We meshed well together last season.”

Running the Spread, what is your approach to guiding the offense as the quarterback?

“I will not force the ball into double-coverage. I was making good decisions with the ball. I will go through my progression and dump down if I have to. I will not put offense in a bad spot by throwing a pick. I keep the chain moving. I keep the offense on schedule; that is my coach’s motto.”

How did your overall game improve last season?

“When I transferred to Hun midway through my sophomore year, my QB trainer, Coach Tony Racioppi, is with Hun. He also trains guys for NFL Prep. He works with players on the Jets, and a bunch of big-name guys in the league. I work with him and all those guys. That has made my game better. My footwork, technique, and mechanics all improved last season. My trainer also works with me on the white board. He works with me on reading defenses, a lot of next level work. There are not a lot of QBs who get that kind of training in high school. All of this work will help me in college.”

The lone loss for Hun last season was to Steubenville. Looking back to that game, was there a learning lesson you took away from that contest that has made you a better quarterback?

“Definitely. At Steubenville, we walked into their stadium after about a five-hour bus drive after staying overnight. We walk in there, they had a jumbotron, a stallion that shoots out fire, and about 10,000 in the stands. We do not get a lot of crowds like that in our stadium. It was a different environment at Steubenville. In that game, we had to play tougher and come together. The first half for us was terrible, but we got it together in the second half. I think we went down 21-0 but we fought back to 21-14 in the fourth. We learned a lot about ourselves and on how to play a tougher opponent in that game.”

Which areas of your technique have you been working on this spring?

“I have been focusing on footwork. Playing as a pro-style quarterback, your play in the pocket is a big thing. I am not running a 4.5 40-yard dash. I have to make sure my feet are aligned and I am not throwing off my back foot. I am working on that. Now, the ball comes out better and more accurate.”

What do you feel are the talents in your skillset that separates you from other quarterbacks?

“I think one of my talents is being able to make every throw on the field. Every Division-I QB should be able to do that. What makes me different that other QBs, I can extend plays. When I am outside the pocket, I can throw on the run. Against Blair (Academy), I hit a fade route down to the right over a 3-star corner. Looking back on that, that is the throw that makes me different.”

I like it. Correct me if I am wrong, but I don’t think New Jersey has set spring practices.

How have you taken leadership of the team during the offseason to keep the offense sharp before going into summer practices?

“During spring sports, we have some guys that are running track or playing lacrosse. I make sure I am throwing with my guys a couple times a week. We are working on our timing and keeping that chemistry. Me and Nick Degennaro (WR), I think he has 15 offers, and some of the younger guys are doing great things out there. We are building that chemistry with the young guys for the season.”

Have you competed at any camps this offseason?

“I have. I have competed at the Opening Regional (NJ), this was my third year going after being invited after my freshman year. That camp has been a good gauge for me for against top kids. I threw against five-star guys, that was an awesome experience to gauge where I am against them. I have been to a couple of college camps: Rutgers, Boston College, Monmouth, and I went to Toledo the other night.”

How did the Rutgers camp performance go for you?

“That was a Friday night camp. There were guys there that I had been throwing with a lot throughout the camp circuit. There were a lot of guys at my level there. I got a Bucknell offer halfway through the camp. They have been awesome and they keep in touch. That was my best camp performance. I just played and was not nervous. I want to carry that performance into the future. “

Are there any more camps on the schedule?

“Yes. I have a couple more camps for quarterbacks I will attend. It is tough with the camps and offers because coaches have to see you live most of the time. They have to meet you and talk to you as well. It is not only about how well you play but it is also about how you act in the locker room and handle yourself off the field. I am planning on going to camps at Elon, NIU (Illinois), Townsend, Fordham, Harvard, and Delaware.”

You have the three offers, which schools are showing interest before this last round of camps?

Are you visiting any schools in the near future separate from the camps?

“Yes. I am visiting Bucknell in July.”

How did everything end up in the classroom your junior year?

“My GPA is a 3.1. I had a 3.75 while at a public school. Hun is an elite prep school. There was some adjustment period for me with the academics at Hun. There is a change of pace without having mom and dad there making sure I am doing my school work. This experience is getting me ready for college.”

Have you taken the ACT and/or SAT?

“I’d say that I can lead a team and at the same time be friends with just about anyone I come across. Going into Hun, there were some big talented guys here. I was able to lead them in a productive way. I have lived all around the world and met all types of people getting along with everyone. I can lead and win championships.”

Logan, it was great learning more about you and your game today. I appreciate your time and wish you success with the upcoming camps.