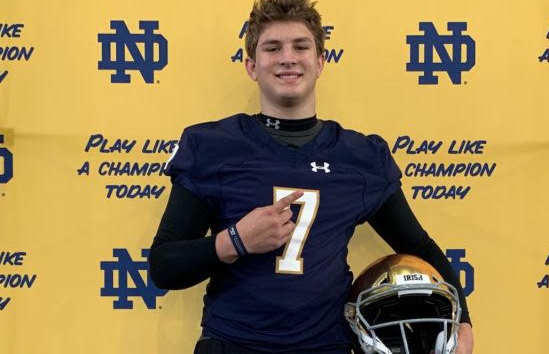 Brennan Storer was nowhere close to the average freshman football player during the 2019 season. Storer was obviously at a different level than those in his peer group slicing opposing defenses with an advanced knowledge of the game and skills that shine guiding a Spread offense. The 5-11, 180-pound, dual-threat impressed throwing for 2,555 yards with 35 touchdowns, tossing just one pick, and rushed for five scores in the nine-game schedule played. As Storer prepares to make the next transition to the varsity level at Highland Park High School in Dallas, he has instructional help along the way – Kevin Murray. Murray, a former QB at Texas A&M and father of Arizona Cardinals’ quarterback Kyler Murray, is molding another top talent ready to take apart Lone Star teams. That developing skillset has already prompted three college football programs to drop offers.

In an RNG exclusive interview partnered with QB Hit List, I sat down with one of Texas’ top 2023 quarterback prospects to learn more about his game.

Brennan, you had a showcase season in 2019 running a Spread offense against your peer group. How did the season go overall?

“Overall, it was really good. We lost one game to a good Rockwall team. We lost by a touchdown. We beat a good Lone Star team and we won district. It went well.”

Regardless of your age, but especially for your grade classification, your arm strength is A-plus-plus. Not all receivers can take in a rocket. How did you work with your receivers throughout the season to get on the same page with your deliveries?

“I’ve been playing with most of them since the fifth grade. They have gotten used to catching hard balls. If I had not played with them, they might have trouble, but they have adjusted well.  We’ve had really good chemistry from the sixth grade on. I know where they are, and I do not hesitate to throw to them. I know they will catch it.”

Understanding the game, not just the offense you are executing but also learning coverages and what the defense is trying to do is such a big part of the game. How did your knowledge of the game grow in 2019?

“I focused on watching a lot of film. Not even my level, but also the varsity level. Most of that translates to the freshmen teams, and I want to be ready for varsity. Watching tendencies of teams and how to exploit the weaknesses of coverages is what I like to do.”

Which parts of your technique in the pocket took a jump with the game reps during your freshman year?

“In the pocket, my movement improved a lot. I think I was sacked once this year. There was not a kid in my age group that I did not feel I could not get away from, not just with my speed but with my movement and getting away from defenders. My offensive line was really good too; that helped.”

You have some running talent. How did you become more comfortable as a dual-threat in the nine games played?

“Over the offseason I worked on breakaway speed and movement in the pocket. Being a dual threat is also about extending the play and improvising. Taking game reps helped. You can simulate it, but you have to translate it to the game. The more games played, the more fluid I was in the pocket.”

The skills showed during the season has already attracted college programs. How many offers do you have already?

“I have three offers; Illinois State, Kansas, and Kent State.”

Which team was the first to offer?

“It was surreal. That has been my dream. That is what I have been working for since I was four or five. My dad played college ball. I want to play at a high level so badly. I did not expect it to happen that early, but I worked hard enough where I could get an offer. It was special to me. It meant a lot because I had worked so hard.”

Being an underclassman, you may not fully know the answer to this, but are other schools showing interest?

“Notre Dame invited me to visit. They emailed my head coach. I went up there on a visit – I liked it.”

Looking ahead. What will your offseason workouts look like?

“Working on my speed. I have a really good QB Coach, Kyler Murray’s dad. I have been working with him since the fourth grade. I keep working at my skills to keep the technique I have now. I have to focus on getting faster. My arm can always get stronger and I can always have quicker feet.”

Brennan, congratulations on the great season and great success on the recruiting trail. Thanks for your time today and good luck with your offseason workouts.