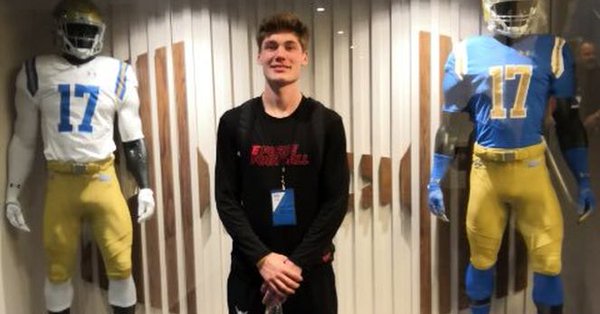 Fans of high school football in Oregon are aware of Cooper Justice and his play along with his potential on the field, but those outside that sphere of influence in the Beaver State have yet to be exposed to the rising talent. The 6-6, 225-pound, true student-athlete rolled into a dual-threat quarterback threw for 1,468 yards with 14 touchdowns and rushed for 156 with four scores in 2016 but was then limited in 2017 after cracking his thumb on a helmet on a follow through in the pocket. As all leaders do, he split time between quarterback and defensive end throughout his junior season putting a team-first mentality forward. With the graduation of Charlie Maynes, the 2019 season is Justice’s with Lakeridge High School and by the looks of it, it will be an explosive season for Justice and his Lake Oswego team.

In an RNG exclusive interview partnered with QB Hit List, Justice gives insight to his offseason workouts, leadership role with the Pacers, and his college camp schedule that is midway completed.

Cooper, how did the 2018 season play out for you on the field with the Pacers?

“It was a solid year for us. We had years when we did not win a league game. Last season, we were 7-4 and made it to the second round in the playoffs and were second in league. That was a great turnaround for the team. I felt there was more I could have done to help the team, but I focused on being a positive leader for the team. It will be even better this year; we have a bunch of weapons.”

When the season ended, what did you feel were the strengths to your overall game as a quarterback with time in on the field and in practice?

“I got game reps that helped. The thing my coach has always liked about me, he likes the playmaking ability that I have. If there is an odd situation where something does not go as it should, he likes that I can think on my feet and make a play in or out of the pocket. That is something I have always done well as a QB. This year will be a lot of fun.”

How did spring practices with the Pacers turn out?

“They went great. The senior class, all my guys – we had senior meetings before spring ball to talk about stuff. We went over the attitude and baseline we need for the team this year. Everyone has lived up to that agreement and we have guys stepping up as leaders. They are moving the young guys to work harder and also pushing themselves harder. It has been really good to see.”

Is there an area of your game that maybe you were not able to showcase often that will be a big part of what you bring to the field during your senior year?

“The passing side of the game. We have Jalen John; he is an outstanding running back. When we were in a read-option package, they used me in a (Tim) Tebow package, they had a lot of running plays for us. The passing game will be huge this year and helpful in recruiting process.”

Aside from set practices, how are you rallying guys off the offense this offseason for extra work and a stronger dedication to the team?

“Starting in the winter, I had my receivers come out with me to throw. We did routes on air and some one-on-ones. I have started meeting with my offensive linemen, the starting five and sometimes all of them, at least once a week to hang out. It does not have to be something too fancy, just an opportunity to get together to bond. Jaylen comes to the get togethers as well. We are all building that bond. With the seniors, the coaches did a really good job to make sure that the meals and get togethers are happening. We sit down and talk, meet, prepare for the season, and keep up the intensity. Our goal is to win a championship. We cannot have an off day. It has been a really good process for the team coming together this offseason.”

What have you been working on with your technique this offseason?

“I know I can get lazy with my feet. I have a really good arm. I have let that make up for my feet. I have been working to make sure my feet are precise so I can use my entire body in my throws. I have also been working on getting through my reads. That has been the main focus. Accuracy and all the small things that are important.”

Have you competed at any camps this summer?

“Yes. I started out going to some showcases like Lewis and Clark and then I went to an Oregon State, Portland State, and a Lakeridge camp up in Washington. This past week I went to five camps in six days: UCLA, USC, Oregon at Cal-Lutheran, Arizona State at Whittier, and San Diego State to end it off. After all of that, then I came home. I made a lot of good connections at all the camps.”

How did the UCLA camp go?

“It was the opening of the week. That camp set the mentality for the entire week for me. It showed how disciplined you need to be with all the details. That set me up for the week and for the rest of the summer. I talked to the team when I got back about it the small details. You cannot let the details slide. That inch can be a first down or a missed tackle. That UCLA camp showed me that mentality needed to be successful.”

It is always great to hear how impactful these college camps can be for you guys. Were you able to showcase your talents at the Bruins camp the way you wanted?

Are there any more camps coming up on the schedule?

“Yes. I am leaving for Wyoming on Thursday, then I am going to Colorado School of Mines, an Eastern Washington QB Camp, a Washington State QB Camp, and I am trying to go to Montana for a camp.”

Busy. With all of the camps left on the list, which schools are showing interest?

“I am receiving interest from Ivy league schools like Columbia and Yale and Oregon, Drake, Georgetown and University of San Diego. For the coaches, it is a film thing with me. After those first three games this season, they want me to send out my reel to show them what I can do.”

Have you taken any visits this offseason?

“Yes. I have met with some great coaches. I had a good visit at Claremont; they have a really good group of guys there. I have also gone to UCLA and San Diego.”

Are you visiting any schools this summer?

“Yes. I am planning on visits with Wyoming, Colorado School of Mines, and Colorado State.”

How did the 2018 school year end up for you in the classroom?

Impressive. Cooper, with all the hard work the Pacers have been putting into the 2019 season during spring and summer practices, what message do you have for the teams you will face this year?

“Look out for Lakeridge this season. It will be a lot of fun.”

Cooper, thanks for your time today and good luck with the upcoming camps and visits.