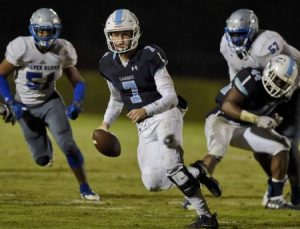 There is a consistent theme at Southside Christian High School – high-level efficiency and winning. Over the last two seasons the Sabres have posted 21 wins on the board and were within seven points of heading to the South Carolina 2A state championship game in 2018. One of the undeniable threads between the winning ways and the high producing offense is the play in the pocket coming from Class of 2020 talent JW Hertzberg.

Hertzberg sent out a warning during the 2017 season passing for 2,350 yards with 26 touchdowns against 12 interceptions. The 6-3, 200-pound, field general kept working on his game in the offseason coming back to hit 152 of 254 pass attempts for 2,414 yards with 23 scores posted on the board and lowered his TD/INT ration to 23/7. He also showed some razzle-dazzle in the Sabres Spread offense rushing for 195 yards to help keep drives alive.

College coaches up and down the eastern shoreline are taking notice of Hertzberg and his playmaking skills. Offers have been extended from Marist and Presbyterian College to the three-star rated recruit, but more are sure to drop with a heavy college camp schedule planned.

In an RNG exclusive interview partnered with QB Hit List, I sat down with Hertzberg for insight on the Sabres 2018 season and his growth within the schedule, his offseason workouts, and found out about his recruiting process to date.

JW, one could argue that Southside Christian was the second-best team in 2A South Carolina football last season coming a touchdown shy of dropping Abbeville in the semifinal round, especially after Abbeville beat Barnwell 48-14 in the championship game. What was clicking so well for the Sabres in 2018 allowing the team to do as well as you guys did?

“Abbeville does have a good defense. They planned it for our team. They know we are a Spread offense, and they know we would destroy them with one-on-one matchups. They played as far back as they could and kept everything in a section; 10 yards back and in. My receivers and I had a great chemistry and we had some great play calls against them. With the leverages, I was in good places with my receivers. Abbeville struggles to cover our run and pass game. My running backs were solid for me. I benefited off of them and me off them. The run opens up the pass and the pass opens up the run. We were stout last year.”

You do a great job of extending plays with your feet be-it in the pocket or moving the chains downfield, what else was working for you on the field as the leader of the offense?

“It was all about completions. I realized throughout my junior year that the game and our offense is all about momentum. So many times we had great drives that were stopped by an incompletion or two. Not every ball has to be a first down. I learned to get the easy out route or hit the flat instead of hitting the long post to keep the drive moving. My coaches keep preaching that to me. College coaches love that you can maintain the game working the offense. I did very well at that this year.

“Our coaches call great plays. We have such a diverse offense. We are not the normal high school football offense. We are a collegiate based offense and not all go-routes. We want to drive down the field and score efficiently. Our coach loves drives that are efficient. It doesn’t matter if it is run-pass-run or pass-pass-run as long as it is efficient. Watching other teams’ film, it seems the offenses are all deep post and go-routes; it is all the same. Stops, go-routes, hitches, screens, you name it, we are running it.”

The offense was rolling averaging 34.5 points per game. How did you prepare during the week to do your part to make sure your squad kept producing at a high level?

“We believe that you practice like you play. Coach (Mike) Sonneborn (head coach) does not want the offense to win in practice. He makes it the hardest for us. It puts me in a bad but great position. Practices do suck sometimes because of how hard it is. We practice against things we will never see but when we drive through those obstacles, we rally as a squad and that helps me lead them more. We had a great chemistry last season. We were hanging together, eating together, and all of us grew up together.”

“Our last game against Abbeville. We lost by one score after we led the entire game. They always come to give us a fight and we give them one as well. The toughest part of the game, we had the lead but they were tough to stop. They have a great run game. It was one of those games that hinged on who could score last. Whoever had the ball last wins. I had to take control of the game, especially with time management. I managed the game and did what needed to happen to stay ahead. We were ahead most of the game. I played through a high ankle sprain; that was also a great lesson for me. We put so much work into that game, it is unforgettable.”

Entering the offseason, what were the strengths of your game as a quarterback?

“I think I have very good awareness, mobility, footwork, and I can read defenses. In our offense, it is based on what the quarterback reads. My coaches are not telling me where to take the ball on each, that will help me with college. That will also be big for me this year. I will have so much more confidence in myself and determination to beat the lights out of teams. The top thing has been my accuracy. I aim small and miss small. That is my motto of the year.”

What have you been working on with your technique this spring?

“I have been working on my footwork, arm strength, speed, and I want to get my strength up. I want to improve the strength in my legs and arms – getting more well-rounded strength wise. I am working on more mobility inside and outside the pocket this year.”

How did the team look during spring ball?

“We looked good. We are a younger team. We were senior heavy last season. But we are looking really good. We have a lot of talent. We are still building and working on our timing. We are getting our timing down. That is the main issue right now. We have some stout receivers this year. Our defense will be unstoppable this year.”

What kind of season will the Sabres have in 2019?

“We are going to have a very efficient team, and a very driven team. We have so much anger built in us and are full of determination from how close we were last year. We want a ring so badly – all of us do. We keep talking about it. We will have a very good season this year.”

Have you showcased your skills at any camps this offseason?

“Yes, sir. I have been going to a lot of college camps. I have been to Wofford, the Miami Hurricanes, and Marist. I have also been on some visits including Howard. At all the camps I have attended, I have received a lot of interest. Marist blessed me with an offer yesterday. That was great.”

How did Marist offer you?

“They offered over the phone. Their coaches came to visit me at school on our last day of spring ball. They said they had two guys at the top of their board. They invited me to one of their camps. All their offers go through the head coach, so their head coach wants to see the players in person. I balled out and put on a clinic at their camp. They loved that and loved my leadership. After the camp, they decided to offer.”

You also competed at a Miami camp, how did that go?

“It was awesome being there. I turned some heads. Jesse Stone, a QB coach with Miami, he really liked me.”

Do you have any upcoming camps on the schedule?

“Yes, sir. I am going to a Columbia camp, there will also be a lot other Ivy League schools that will be there. I am going to Memphis for a visit, a Princeton camp, a N.C. State camp, and to FIU again.”

Which schools are you drawing interest from right now?

“Howard – they were talking about an offer during my visit. Their offers have to go through the head coach. Hopefully I will hear from them midweek. FIU and Memphis are showing a lot of love. I will keep in touch with them.”

“I have two, Marist and Presbyterian College.”

You listed off some schools you have visited this offseason already. If you will, lay them all out for me again?

“Yes, sir. I have been to FIU, FAU, and Miami. I have also been to Wingate, Princeton, Marist, and Howard.”

You have the camps, as mentioned, are you visiting any other schools this summer?

“I would like to take a visit to San Diego State and San Diego. I am going to visit Memphis, Tufts and Bates. I might visit Bowdoin as well.”

Your career passing stats are 4,764 yards with 49 touchdowns, are you close to breaking any school records?

“I’m not sure, honestly. My coach mentioned something about that. I think I have the most in a single-game, but I could be wrong.”

What goals have you set for yourself this summer before the 2019 season begins?

“I did have a kick butt year in school, that is one thing I am proud of. I am going to keep on working on my ACT and SAT scores. They are good right now, but I have only taken them once and I want to improve them. I will keep working on my build.”

What goals do you want to achieve during the 2019 season?

“The goal is state. That is all I want to do. All I want to do is win. We are so driven to win state right now. It bugs us every day that we were 50 seconds off from going to state. We lost on a walk-off kick return. We want that ring this year.”

JW, it was great learning more about you and your game today. I appreciate your time and wish you success at all the upcoming camps and with the visits.