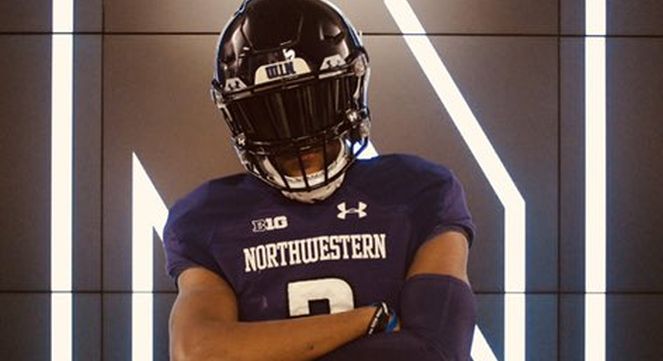 Executing a run-heavy offense for much of the 2019 season, Fenwick High School quarterback Kaden Cobb got to show a sneak peek of coming events. The 6-3, 190-pound, gunslinger worked his magic against 5A Illinois squads completing 62 percent of his passes for 2,171 yards with 21 touchdowns and posted another score on the ground. Cobb’s arm talents earned first team All-Chicago Catholic League honors and an early offer from Northern Illinois. Once the 2020 season begins, Cobb will be lighting up the sky in the Friars’ new Air Raid offense turning the growing amount of recruiting interest into hot scholarship offers.

In an RNG first-look interview partnered with QB Hit List, Cobb ventured into the Lab for a deep Q&A covering his skills and recruiting process.

Kaden, when people talk about quarterbacks having a gun for an arm, you are one of those guys. How have you developed your arm strength to be able to uncork the long ball like that?

“I was never really huge on the upper body, but with my legs I was more athletic from playing basketball and jumping. My legs give me that zip and with my hips. From working with my QB coach and in practice for the games, the last thing I am thinking about is my feet. All quarterbacks use their legs to drive the ball. I am working on my upper body; my distance should increase by another 5 to 10 yards. In the past, my arm strength was all from lower body strength.”

With that rocket arm, your receivers are catching the heat cleanly; that comes with time and practice. How did you work to develop chemistry with your receiving corps last year?

“Practice. We are never just standing around in practice. We are always catching and throwing, always chucking the ball to each other. There are a lot of practice drills we do with the receivers catching the ball coming towards me at different speeds. One of the receivers, we’ve been playing together for two years and two others – I don’t know – a while now; we had to build the chemistry over time.

“There were three younger receivers. I worked with them helping them adapting to the offense and getting on at the varsity level. I was able to work a lot with them after practice, on weekends, and after meetings on Saturday morning. After all the extra work, come time for the games they were making the hard catches not look difficult. They are so used to my hard throws it is second nature.”

What offensive set were you running in 2019?

“We were running a west coast, old school, offense with two backs in the back a lot. At Fenwick, we adapted into the shotgun later on in the season. We lost our head coach with two games left. My QB coach was the offensive coordinator. Once he took over, we ran more out of the shotgun.

“This year we are abandoning the shotgun coming in with an Air Raid offense. There will not be more than one running back in the backfield this year. With all that is going on, we are ready to practice all that we’ve been talking about. With the new offense, my numbers should double this year. The quarterback before me threw for about 1,000 yards for the season. I was lucky to get my routes and time in the shotgun in last year.”

In which game did you turn in your best performance during the 2019 season?

How did your overall game improve last year?

“It improved the most by reading defenses better. My freshman year throwing the ball was not a problem. But then adapting to the speed and reading defenses at the varsity level took me about two or three games. No one is perfect, but I adapted quicker than most. It was smooth sailing and the team was rolling after those first couple of games. We had a tough schedule last year, we played three Top 10 teams in the state and we started six sophomores on offense. For us to go that far, was great. My leadership and reading coverages was the biggest thing from last season for me. I take pride in that.”

Since the season ended how have you been working to expand your knowledge of the game?

“I have been able to get in contact with former Michigan State quarterback coach (offensive coordinator) Brad Salem. We started talking last week. He has been going over what coaches expect in college, going over coverages, and breaking down the game for me giving me a big upside for the next few years. It has been great to work with him. Just from the first session it was a big leap for me. It is great to have him in my corner right now.”

No doubt. He can help on so many levels. With your skillset, what have you been working on this spring?

“My stroke, my technique and my mechanics, and getting rid of bad habits. I have been working on my drive, footwork, and all that. With my mechanics, I want to get that all fine-tuned for when I do work out for colleges it is right.”

This was kind of covered already, but will give us a chance to drill a little deeper. Will your role within the Friars offense change at all next season with the new offense?

“Yes. There will be a lot more run-option, a lot of RPO (run-pass option). I am listed as a dual-thereat but I only ran the ball seven or eight times last season. There are different options passing and running, and handing off to the running back. We have nine back starters; we are losing an offensive tackle and a receiver. We are adapting to the new offense getting everyone up to speed. I was a captain last year, and I will be this year. I will make sure things are going the way they need to be going for the season on offense.”

This summer, are there any college camps you may attend?

“I have Northwestern and Michigan scheduled again; they were supposed to come this spring to see me at practice. Those are the only ones I have scheduled right now.”

The offer from Northern Illinois is on the table, which schools are showing interest?

“On a weekly basis I am talking to Michigan, Indiana, Missouri, Kansas State, Iowa State, Iowa, and Miami-Ohio, those are my biggest interest right now. I Facetime with Mizzou and do Zoom meetings with Kansas State. Yesterday we did a Zoom meeting for about an hour. I get on Zoom with Michigan and I have one with Purdue coming up.”

Going back to last season, which schools have you visited so far?

“I’ve been able to visit Iowa, Miami-Ohio, Northern Illinois, and Indiana. I was supposed to go to Missouri and then Minnesota but all this happened and all was cancelled.”

The Iowa visit, how did that go?

“I have been to Iowa maybe five times, I have been there a lot. It has been a foundation for me to build off of up there. I love the campus, they have a great campus, and the coaches are laid back. I talk to their QB coach get on the board with him. Iowa is a place where I could see myself in the near future. I don’t think they have offered anyone in my class yet. I am waiting it out and grateful to be in contact with them.”

And the Northern Illinois visit, how did that go?

“That was great. I’ve been there twice, I camped there last summer. I was one of the first sophomores over the years that they have offered. A lot of MAC schools wait to do that. I talked to their head coach and tight ends coach, and I have been in contact with the QB coach. They tested me to see what I was made of, and he liked what he heard. I had visited two weeks before when I got the offer. They wanted to see me in person. My coach told me to call them, so I did and they offered. I was shocked to get an offer from them early. Their offer was unexpected.”

Looking ahead, are there any planned visits you may take?

“Yes. The visits I have planned are to Kansas State, Missouri, Indiana, and Northwestern – which is only 45 minutes away from my house. Michigan wants me to come up, I have been there twice; I love their campus. Those are the main ones wanting me there. Depending on how recruiting goes, we’ll see how it goes from there.”

Time for my virus buster question. What have you been doing for fun to keep yourself entertained?

“A lot of Madden, Madden tournaments, and Call of Duty. We created a league for Madden. That is about the only way to pass time, playing Madden and working out. We are on spring break now, we have no classes now.”

Update me on how you are doing in the Madden league.

“I am dominating. I pound them with Derrick Henry and pass it when I need to. That’s what I have been giving to them.”

Not what I expected from a quarterback, but very smart as an offensive mind. Kaden, it was great getting time in with you today. I appreciate it and wish you continued success in your Madden league.