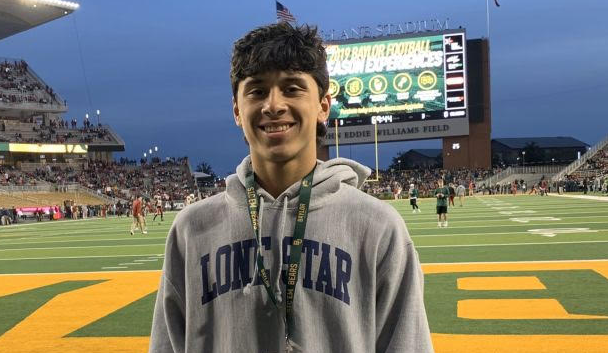 Hard to imagine a first season at the varsity level going any better than what Garret Rangel has going with Lone Star High School. The sophomore has surprised the state of Texas with his play in the pocket leading the Rangers to a 14-0 record against 5A competition and a No. 32 national ranking (MaxPreps). The 6-2, 170-pound, talent has been unstoppable guiding his squad to a 52 point per game scoring average with the team relying heavily on his strengths within the Spread. Rangel has blistered secondaries to an estimated stat line of 4,500 yards with 50 touchdowns tossed.

As the Rangers continue their march through the playoffs with a Saturday semifinal date set against Ryan (14-0), college coaches are starting to take notice of the magic in Rangel’s capacity to play the game. In an RNG exclusive partnered with QB Hit List, I sat down for an in-depth conversation touching ground on his season and recruiting visits.

Garret, the Rangers have been an unstoppable force this season. How has the team come together for a perfect run so far?

“We are all so bonded and bought in with each other and our coaches. We trust each other, and we go out there to execute to the best of our abilities. We have been doing that well this season.”

The offense has been laying it on teams; what offensive scheme are you guys run this season?

“We have balance in our Spread. Sometimes we go power with the run game.”

What makes the offense so dangerous?

“We have a lot of weapons at receiver and with our running backs. Our front five, the big nasties, they have been great this season. They are all good people; it is a great offense.”

As an underclassman, what has that challenge been like for you going against all the varsity guys?

“For me, I like to prove people wrong. Some people said I could not do it for our team being a sophomore. I’ve wanted to prove them wrong. We have beaten Highland Park twice this season, people said we couldn’t do that. Same for the Lancaster game. We are the underdogs. That is our mindset and we like proving people wrong.”

Within the scheme, what were some of the routes you were hitting?

“We have a lot of route combos. Our coach is very smart, he is always studying film and putting in great route combos. We run a variety of routes like posts and go routes. It depends on the game plan and who we are playing that week.”

How did your understanding of the game grow throughout the season?

“After the first couple of games – after first HP (Highland Park) game my confidence grew. After the first four games it all slowed down. I was reading defenses and coverages better and knowing my key matchups. I was proving to myself that I can play with the big boys.”

That you did. Which parts of your game have been the biggest personal improvements as a quarterback?

“During the summer, my arm would dip with a slower release. I have worked on up and out and getting it out quicker. With our quick game, it helps getting the ball out on time and with rhythm.”

Playoff time means taking the game to another level. How have you raised your play when it mattered most?

“With our OC, he tells everyone to keep calm and be composed. When we execute and do our job, everything goes right. If we do not execute, nothing goes right. When we are on point, we play great. We have to block out the hype and play our game and keep doing what we’ve been doing.”

Looking at the season in totality, which has been your best game?

“I don’t know… maybe the second time against Highland Park. They tried to shutdown (four-star WR) Marvin (Mims – Oklahoma commit). They can try but will never stop him. Our OC did a great job spreading the ball around in that game. Another one would be the Independence. In that game, going into it there was a lot of hype. They were talking trash. We kept our composure throughout. That was my best stat game. I think I was 20 for 21 with 338 yards and three touchdowns.”

Amazing game. Given your success guiding the team this season, which schools are now showing interest?

Did you get to take any game day visits this season?

In order, how did the Arkansas visit go?

“It was really good. I was there for the San Jose State game. They have a great atmosphere at Arkansas and the coaches were really cool.”

And the TCU visit?

“It was great. They played Texas; it was a great atmosphere. I want to major in broadcast, their broadcast team is top-10 in the country.”

Baylor: It was fun, vs. Oklahoma. The people there were cool and nice. We had escorts show us around, it was great. That was a great visit.

Garret, I had fun going over everything with you today. Thanks for your time and good luck with your semifinal round game on Saturday against Ryan.