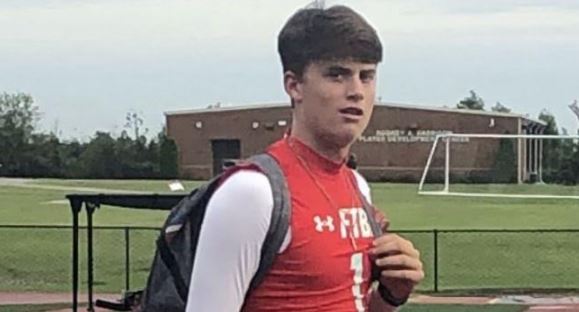 When the 2020 season gets going in Louisiana, Class of 2023 quarterback Reese Mooney is prepared to make all take notice. The 6-1, 190-pound, gunslinger zipped the pigskin around the yard for 1,589 yards with 25 touchdowns tossed and two rushing scores scorching freshman and junior varsity competition last year. The step up to the 5A level with Denham Springs cannot come fast enough with Mooney working overtime to prepare for the challenges ahead and the new Air Raid offense being installed. As Mooney dials in on the upcoming schedule, college programs are doing the same with him along the recruiting trail. The three-star recruit is holding six offers with programs spanning the Pac-12, SEC, Big 12, and ACC tracking his progress.

In an RNG update interview partnered with QB Hit List, Mooney updates his progress in the Air Raid with an overview on his recruiting prospects.

Reese, when we mixed it up last the Yellowjackets were going through a transition on offense implementing an Air Raid/Spread attack. How have you been adapting to the new offense over the spring and summer months?

I am dialed in with my coaches going over film and Hudl. We have a new offensive coordinator, we are getting locked in with him and all the new coaches.

What are some of the routes within the scheme your receivers are running?

From a cerebral approach, as an Air Raid QB what do you have to have down pat to be able to execute the offense effectively?

Have you been watching film on any quarterbacks or collegiate offensive schemes to pick up more nuances of how the attack is orchestrated? If so, who or which teams are you watching and what have you picked up that will help you this season?

Yes, I have watched Mike Leech at Washington State, he’s at Mississippi State now. They are an RPO/Air Raid offense; I love them. I’m learning coverages, blitz protections, knowing the routes for all my receivers, and all of that.

With your mechanics, what have you been fine-tuning or improving upon this summer?

My three-step drop and my quick game one-step. I have a little stutter that I need to work on with that step to make it a lot. I am also working on a better release to get the ball out quicker and speed.

How have you pushed your overall knowledge of the game forward as the 2020 season nears?

Learning defenses in film study with my quarterback coach and trainer. We go over that two days a week. That work is helping me a lot. I am seeing defenses and picking them apart. My coaches are great, I give them a lot of credit on helping me become a better player. They are working me after hours.

When does fall camp begin for the Yellowjackets or has it already?

We are starting workouts, doing 7v7, and going over our offense. Oct. 9 is the new start date for the season.

From what you have seen so far, how is the team looking?

We got skills in the secondary, great receivers, and a great running back in Raydrian McKneely; he has some offers.

Are there any rivalry games you have circled on the schedule?

Yes, sir. Zachary, that is our main game. Their quarterback, Eli Holstein (2023), has an LSU and Kentucky offer.

Let’s roll with that. Which schools are showing recruiting interest but have not offered yet?

Nice. How many offers are you holding now?

Which program was your most recent offer?

My most recent offer was Ole Miss.

When the dead period is over, are there any programs you’d like to visit?

From our previous interview, I know you are also a big-time baseball player. Did the baseball season happen in Louisiana this summer?

Yes, sir. I played with a travel team, Team Louisiana, for six or seven tournaments.

How did the season go for you overall?

It went pretty good. I started off really hot, and had a great summer overall.

Where did you show the overall improvements on the diamond this summer?

Getting to the ball quicker, making strong throw to first, and my arm strength. My stick improved; my quick swing helps a lot.

Which positions did you play?

I was playing third and short. I would like to add that I am still 100 percent committed to Houston for baseball.

Reese, thanks for your time today and good luck with the workouts this fall in preparation for the upcoming season.