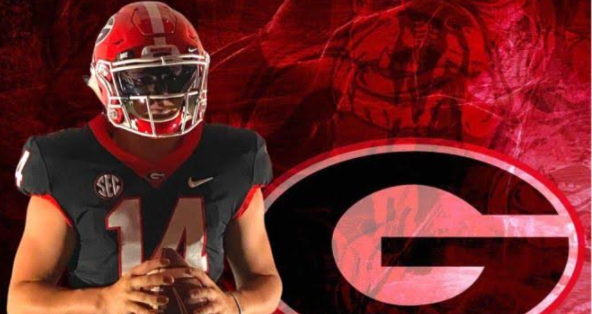 The quick rise for Parker Leise up recruiting boards has been impressive. From a young age, Leise has been spinning it but took a turn at linebacker as a freshman earning Nebraska Super State honors. The one-year hiatus on defense helped the 6-2, 210-pound, talent in his return role under center with Omaha’s Creighton Preparatory School in 2020. Having a better idea of defenses, the strengths and the weaknesses, Leise pushed for a breakout season with the Jays. When the lights come up on the 2021 campaign, Leise will be taking on 6A Kansas defenses with Shawnee Mission East.

Ahead of executing a new offense against a new set of challenging defenses, Leise has been showcasing his arm and talents across the country throwing for coaches in Big 12, SEC, and Big Ten country.

For an update on his offseason workouts and camp circuit, Leise goes one-on-one in the RNG Lab partnered with QB Hit List.

Parker, during your sophomore campaign with Creighton Prep, you were doing a lot. Looks like some Spread sets, under the center action, and option plays, what offense(s) were you running in 2020?

We ran a lot. Those coaches were from Nebraska. My dad played tight end at Nebraska from 1987-91 under Tom Osborne, a lot of those coaches played at Nebraska too. They were in the old football days, running, under center, and some passing game. It was a hybrid offense. We were about 50-50 under center and in the Pistol. The offense was very effective and a lot of variety, defenses could not see what we were doing.

With your father having a college football background, how has that helped you further understand the game perhaps ahead of your peer group?

I started playing football in third grade, he was my coach. We had a high level/skilled team. He was always teaching me to play and understand the position at a higher level. We were breaking down defenses and he was allowing me to make audibles. If I saw quarters, looks like Cover 2, I know the corners are going to drop because of their feet, I could audible out of that running a hitch on the right because I know the corner is bailing. He allowed me to be free at quarterback and make those decisions and audibles. From a young age I was making high level decisions which has set me apart from other quarterbacks.

Getting that varsity experience in such a diverse set during the 2020 season, what key parts of your skillset grew the most?

Getting that experience against a live fast defense was great. In Game 1 I was getting those chills and being antsy, the experience was big for me. During the first game, I learned a lot about controlling my emotions and actions, and the way I wanted to play. The rest of the season I was able to calm down, which made the game get slower and I was making decisions faster. The experience was the biggest thing, and playing at a faster level.

This offseason you’ve transferred to Shawnee Mission East, what style of offense will you be running with the Lancers?

We will run a lot of Pistol; I don’t think we will go under center if at all. We will be passing 80 percent of the time. That will allow me to see defenses, practice the passing game, and help me with making decisions on the field.

How have you been preparing this offseason for the new challenge?

About a year ago, right when COVID hit, I started coming to Kansas City to train with Justin Hoover, my QB Coach at Spin it QB Academy. I’ve been coming to work with him about five days a week, I was basically living down here training with him. Then I went back to Omaha for the 2020 season, went through the season, and went back to Kansas City and started training with him again.

What have you been working on with your mechanics pushing that part of your game ahead?

About a year ago we knocked out a bunch of the big stuff, now we are finding little things to tune out and tune up overall. Going through the camp season, we have been going on quality reps over quantity and working on perfect form and maximizing my ability to throw the ball.

Let’s get into camp season. Have you been to any camps yet?

Yes. My recruiting process has been very exciting. I picked up an early offer from Emmet Jones at Kansas. I have attended several prospects camps and I was at Geogia for a private session. After the session, I talked to their coaches for about two hours afterwards. I was very impress with them.

After that workout, I threw for Coach Gordon at Iowa State. During that visit I learned about him and his football program. My third camp was at Missouri. I met with Coach Eliah Drinkwitz. We talked and I toured the facilities with him.

Nebraska was the fourth camp. That is always a special camp because that is my dad’s alma mater. They had a big BBQ and a competition when we were there. My next camp was in Dallas, I was there for a big mega camp at SMU.

Then my sixth camp was with Wisconsin. I threw for Coach (Paul) Chryst (head coach) with a small group of elite quarterbacks. We spent quality time together. I learned a lot about Wisconsin during that trip. My last stop was at Notre Dame. I threw for their coaches with another group of elite prospects. After the workout, I went on a tour and learned about the program. Coach (Tommy) Rees (OC/QB) was great. I appreciated his process.

What’s on your schedule coming up?

Our schedule is still tentative. I have committed to my high school install camp. I am going to Kansas State on June 12, going to Missouri 13th, and Kansas on 15th and 23rd, and then Nebraska on the 18th. I am going to the Rise and Fire camp in Chicago on June 20th and to IMG the 25th through the 28th for The Show by NextGen. I am also planning on going to Penn State on July 30th. I am still trying to fit in TCU, A&M, Oklahoma, Northwestern, Iowa, Indiana and others.

You have the Kansas offer; with all of those visits and workouts, which programs are showing recruiting interest?

There are a lot from all the schools I have visited, and a lot more are becoming interested in me. I am excited about talking to the coaches.

When you are not doing your school work or doing something football related, what do you like to do for fun?

I love flying planes. I am working on my license. So far, I have done several solo flights. I want to keep flying for fun not as a profession.

Parker, thanks for your time today. Good luck with all the upcoming visits and camps.