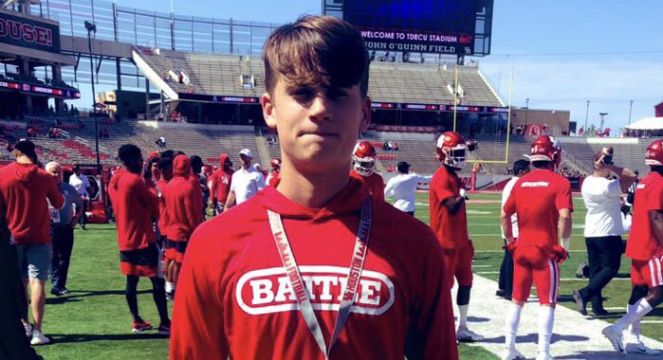 When the lights turn on this fall casting a 100-yard spotlight on Denham Springs’ gridiron, there will be an electric energy in the air. Coming off a 1-9 season in 2019, the Yellowjackets program is ready to turn the tables on 5A Louisiana competition and are looking to Class of 2023 quarterback Reese Mooney to lead the charge.

Mooney looked like a man among boys last season playing freshman and junior varsity ball connecting on 71 of 111 passes for 1,589 yards with 25 touchdowns while posting two scores on the ground. The 6-1, 175-pound, field general is unique in more ways than one. His grasp of the game and fundamentals are beyond the curve. The overall athleticism is not of his peer group having already received an offer from the University of Houston for baseball, an offer he has already accepted.

Back on the football field, Florida Atlantic has offered Mooney and teams across the country are looking in on his progress as he prepares for his sophomore campaign. In an RNG exclusive interview teamed with QB Hit List, I sat down with one of Louisiana’s fastest rising prospects for an in-depth conversation.

Reese, you got to display the gun for an arm from the diamond on the gridiron last season with the Yellowjackets. For you personally, how did your freshman season go?

“It went great. I had a lot of skill sets around me which made it easier, especially with the offensive line that I had. We went 9-1, we had a great year.”

The opportunities you are getting on the field make you a rare and elite quarterback. The offense you execute utilizes the Spread and a pro-style set. What is that like for you getting to execute those different styles of offenses?

“I learned a lot from my senior quarterback. I would meet up with him, we’d go over stuff every day. I got better at it from there. Going under center last season, that was my first. It is helping me big-time overall. The run opens up the pass.”

What were some of the routes you were throwing to last season?

Going from under center or from the shotgun, what were the drop steps you were using last season?

“Three to five. I did some variations on the different drops too.”

Are you guys running the same offense in 2020?

“We have a new staff and a new system. We are running an Air Raid in 2020. RPO and Spread

Running the Air Raid, are you excited about the offense?

Going back to the 2019 season; how did your overall game improve last season as a QB?

“The big thing was reading defenses, I improved more than ever. My arm strength and arm velocity improved and I was getting the ball out quicker to my receivers.”

What are you working on this offseason with your technique?

How are you growing the mental aspects of your game?

“I meet with my offensive coordinator two nights a week going over the offense. We go over how to read coverages on the play we are running. I also work with three different quarterback coaches including Rohan Davey (LSU) and Bryan Sparacina (LSU).”

With a new offense and a new coaching staff, what has you excited about your sophomore season?

“My goal is to lead Denham Springs to two state championships and to break the school record in passing yards and touchdowns. Winning is first, and this town is ready to win.”

Are you playing 7v7 with a travel team?

Are there any camps you may attend later this spring and/or summer?

You have the offer from Florida Atlantic, which schools are showing interest?

Are there any visits coming up you may take?

Have you visited any programs already?

“We’ve taken visits to Arkansas State, I was there on Wednesday, and to Georgia a couple of months ago. I’ve also been to Florida State and of course to Houston.”

How did the Arkansas State visit go?

“I really liked it. I liked their staff. Their offensive coordinator is really nice. The facilities are really great there. Their facilities will shock you.”

And the Georgia visit, how did that go?

“It went well. They measured my height and took my weight. We toured the campus and watched their game against Texas A&M.”

Nice. And the Florida State trip, how did that turn out?

“We were there for their game against Syracuse; I liked it. We got to talk to the coaches. I talked to Coach (David) Kelly a lot; he’s at FAU now.”

Reese, thanks for your time today and good luck with the rest of your offseason workouts.