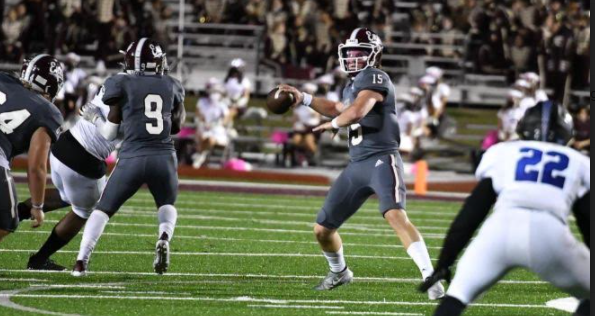 The 2020 high school football season was one of learning for Jackson Gilkey playing behind a senior. As soon as the door closed on Gilkey’s sophomore season, the focus changed. A foundation was set hitting 19 of 26 passes for 243 yards with three touchdowns avoiding an interception while rushing six times for 23 yards with a score. Now, the Ennis Lions’ offense is in his capable hands.

When the Friday night lights shine this fall, Gilkey (6-3, 210) will be a different quarterback after a full offseason of instruction and technique work from top college coaches around the country after competing at various camps. Seeing Gilkey go wild this season against 5A Texas squads will be exciting.

In an RNG exclusive interview partnered with QB Hit List, Gilkey covers ground on his offseason grind and camp circuit that helped produce an offer from the University of Houston.

Jackson, the evaluation period has been a big one for you picking up an offer from Houston in May. Which national camps have you been to so far displaying the arm talent bringing in the extra recruiting attention?

I started a long time ago, I have gone to a bunch of FBU camps, USA camps, and a few college camps this year.

At the FBU camps, what were you able to showcase with your skills?

You said you’ve been to some college camps, which ones?

This year I have gone to Texas, TCU, and SMU. And I have a few coming up this weekend.

Throwing for the Texas coaches, how did that go?

It was pretty good. I met a lot of their staff. Charles Thompson, from FBU, his son is the safety there. I got to meet him and talked to him a little bit.

At the TCU camp, what did you do well in front of the college coaches?

That one was pretty good. It was a night time camp under the lights. I met their new QB coach and showed him what I can do.

At the different college camps, what kind of feedback are you receiving from the coaches?

All good feedback. A lot of them are trying to coach me too at the camps. I am learning and getting better as well as getting in front of them.

Are you playing 7v7 this offseason?

Yes, I am working with my high school team going against other high schools in the area.

Playing 7v7, how is that helping you read coverages?

With the Lions, will you be executing a Spread attack again in 2021?

What have you been doing to build that chemistry with your receiving corps this spring and summer?

I am trying to get them all to show up to work on routes every day and work on the timing. We are learning our strengths and putting everything together.

Which routes do your guys run within the scheme?

Crossers and some rub routes. We are taking advantage of our one on ones against some teams.

How are you expanding your understanding of the game this offseason?

A few minutes ago, you said you had some upcoming camps left on the schedule; where else are you going?

I have Texas Tech tomorrow (Thursday), Abilene Chrisitan, Vanderbilt on Sunday, and an Alabama camp on Monday.

Is the Alabama camp being held in Texas or are you going out there?

I am going out there.

That’ll be a lot of fun.

Wrapping the interview up. Which schools are showing interest now?

All the ones that I have been going to their camps, other than ACU and SMU. I have some camp invites from some northeast schools, like Yale invited me to their camp, Penn, Dartmouth, and a couple others I am forgetting.

Landing that offer from Houston, what was that moment like for you?

It was crazy. After all the work I have put in, it was relaxing and motivating at the same time getting that call.

No doubt. Jackson, I appreciate your time today. Wishing you great success with the remaining college camps.