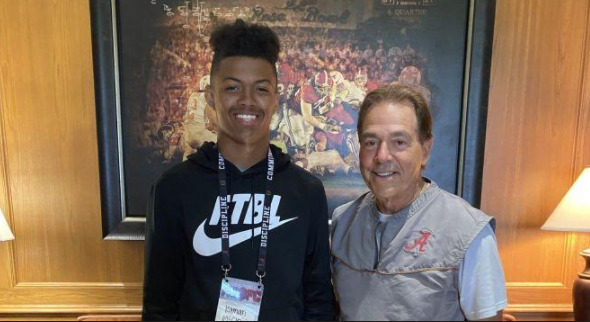 Any sport is about momentum and confidence, and Class of 2024 quarterback Kamari McClellan should, rightfully so, be full of both right about now. The 6-2, 180-pound, gunslinger is fresh off a successful college camp circuit that has boosted his scholarship offer total to five. The 2021 season will allow McClellan to further showcase his dual-threat abilities in Oxford High School’s new RPO-Spread against 6A Alabama defenses with college scouts watching.

Making another visit to the RNG Lab, McClellan sat down for a QB Hit List partnered one-on-one going in-depth on his new offense and college camp performances.

Kamari, when you take the field this season, what style of offense will you be executing with the Yellow Jackets?

We are running RPOs (run-pass option) – a fast-paced offense with play signals coming from the sidelines.

You have some wheels and that developing arm, how do your skills fit the Spread offense?

It is good. I need to work on a few things like the reads on pass options, but I’m getting better. The offense works well for me as a dual-threat.

How have you prepared this offseason for some of the defenses you may see?

What have you been working on with your mechanics?

My throwing motion and footwork. When I went to the different camps, the coaches told me that my feet were uneven with one of my steps. I’ve been working on getting my drops timed with the routes; my target was off a little bit last season. I fixed that.

With the offense, what are some of the routes you are connecting on this season?

A lot of quick game routes, screens and some fades and go balls; one step shuffle. All quick game stuff.

How has spring and summer ball gone with the team?

It is going good. We have a new head coach. He changed our whole offense. We are doing well now. Our offensive line has got a whole new way of doing things with different formations. Our RPO is different from the Spread we ran last year.

After the team went 11-2 in 2020, how are you guys looking going into the new schedule?

We lost a lot of guys, some guys transferred, but I think we look good. We played against Austin, they are 7A, and Clay-Chalkville, we did okay there. There were some mistakes but we’ve worked on them.

You mentioned going to camps, which national camps did you compete at this offseason?

At Under Armour and Rivals.

How did the Rivals camp go?

It went really well. There was a lot of top competition there. I won Rivals MVP for QBs for all the QBs out there.

Which college camps did you go to this summer?

I went to Georgia, Clemson, South Carolina, Georgia Tech, Alabama, Auburn, Florida State, Jacksonville State, and Wake Forest. That is all the camps I can think of right now.

Wow. You were busy. Tell me about your camp performance at Georgia.

It went really well. I performed really well. They coaches walked me around the school, we took pictures, and had dinner afterwards. Their coaches said I am at the top of their recruiting list.

Very cool. And the Auburn camp, how did that go?

It went well. Their running backs coach called my head coach about me. Coach (Mike) Bobo (OC) wanted to see me throw in person. I spoke to all the coaches at their camp, did the individuals, and the one-on-ones; I did really well. After winning the camp MVP, Coach Bobo wanted me to work out in a private session with two other guys. We were doing the drills he wanted us to do to see what we can do. After that, we took pictures and that is when he offered me.

That is the definition of a great camp. Which programs are now showing interest but have not offered?

Clemson, Alabama, and Florida are showing interest. There have been a lot getting in touch with me, but that is all I can think of right now.

How many offers are you holding now?

Of the five, which program was the first to offer you?

Looking ahead, which schools might you visit this fall?

A lot of coaches have said I can come to home games this season: Clemson, Georgia, Georgia Tech, Auburn, FSU, Florida and a couple more schools.

Sounds like it is all going your way. Kamari, it was great catching up with you today. Wishing you success with your continued preparations for the 2021 season.

RT @_elimanzanares: Everything w Purpose.. I maintain focus on the things that will help me reach my goals @Elev8QBacademy @QBHitList I ‘m…

RT @CarsonJt19: After talking with @Coach_Crisp I have decided to commit my future to The University of Indianapolis! @UIndyFB LETS GO HOUN…

RT @JosiahOxendine: QB ‘26 I know you guys are GA based but thanks for showing the Carolinas some love. Top Ranked QB in NC/SC @deucerecrui…

RT @Dussttin: #FSU has taken an early lead for 2025 QB Tramell Jones Jr. (@TramellJonesJr) after his recent visit. "They're my No. 1 schoo…

RT @MattDeanQB7: After a great conversation with @Coach_CatFB, I am honored to receive an offer to play football at Lake Forest College! #F…

RT @CarsonWelsh1: Thankful and blessed to receive the recognition from @QBHitList being ranked the 2nd best QB in Ohio for dual threat in…