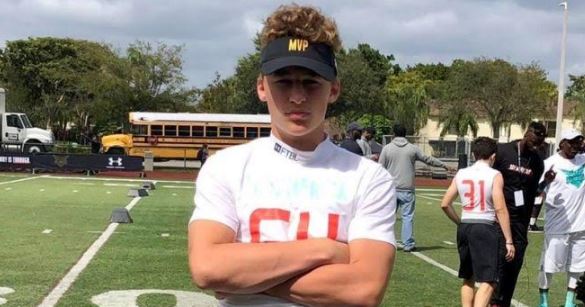 Class of 2024 quarterback Tyler Aronson enters the 2020 season ranked No. 6 in his class nationally by QB Hit List and will have a much better opportunity than his peer group to push his name up the list when all is said and done. The 6-2, 200-pound, gunslinger won two Pop Warner championships playing the 2019 season with the Palm Beach Garden Gators, but will be taking three big steps forward this fall putting his skills to the test. When Aronson steps foot on the field for his freshman season, he will be slinging the rock as a starter against 3A Florida varsity competition for The Benjamin School.

In an RNG first-look interview partnered with QB Hit List, Aronson walks us through his offseason workouts as he prepares for a breakout season.

Tyler, when you wrapped up the 2019 season, what did you feel were the overall strengths to your game as a quarterback?

Reading defenses well, having a strong arm, and being a pro-style QB who can run when needed. I feel like I have a strong arm and that I can put it in anywhere on the field and at any arm angle. I can throw hard, soft, and in the middle and I can throw anywhere at any time.

What offensive set were you running last season?

Last year we were a two-by-two set with and some three-by-one. We were pretty simple with the offense last season. We were mostly running a Spread and we did some zone read. In high school, I will be doing more like that but there is more to it like having an empty set.

You just touched on this, but going deeper. With The Benjamin School, what style of offense are you running this season?

We are lining up in a two-by-two, three-by-one, an empty set, three-by-two, and some RPO (run-pass option).

How have you prepared this offseason from a mental standpoint to take on 3A Florida defenses?

I have watched a lot of film. A player I look up to is Bryce Young (Mater Dei/Alabama). I watch him play and watch how plays on big stages and how he reacts to it all. I have won two Pop Warner championships, and one was a game winning touchdown pass. At the end of the day I want to perform to the best of my ability on the big stage. If I stay calm and do my best, I will do well. Bryce can run and throw, he was a quarterback at Mater Dei (California).

What have you been working on with your mechanics this spring and summer?

Taking that next step in level of competition, where are you already seeing the improvements in your overall game?

I have been lifting a lot, four days a week. I feel much stronger and I have leaned out. Going into the season, I am stronger, faster, and quicker. I have become more consistent, especially with Coach Danny’s help. I can throw from any position and I am more consistent. I could throw hard and make good passes, but now I am more consistent in doing that.

How has fall camp with the Bucs gone for you so far?

Good. We start back up next Monday. With the virus, we had to stop for a while. We start conditioning again on Monday and the 24th is our official start to practice.

What are your goals for the 2020 season?

This season I was to be the JV starting quarterback, but our senior quarterback transferred out. I will be the varsity starter this year. My goals are to throw, I am confident but not cocky, I want to throw for 3,000 yards and 25 touchdowns at least. Also, I want to make myself better overall. I want to improve and be better than the day before. The goal is to keep improving and learning.

As an underclassman you may not fully know, but which schools that you know of are showing recruiting interest?

Have you had a chance to visit a college program yet?

Yes, I took one to Tennessee. I went to a 7v7 tournament in Tennessee last year and then we visited the school.

Once things open back up, do you have any planned trips on the schedule?

I want to visit Maryland.

Tyler, thanks for your time today and wishing you and the Bucs great success for the 2020 season.