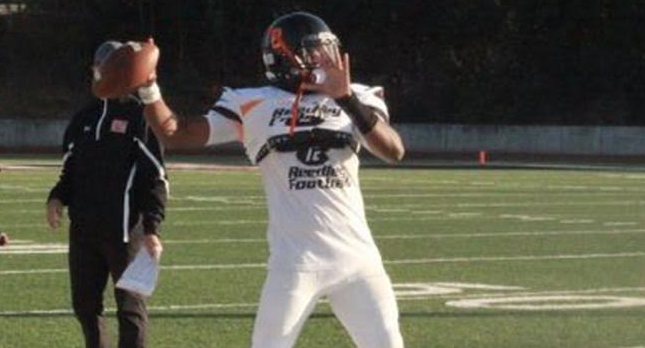 The extra two seasons at the junior college level for Class of 2020 quarterback Armon Hickson paid off greatly. Coming out of Peach Tree High School, the Georgia product played for California’s Reedley College learning more about the game under offensive-minded head coach Eric Marty. Over the past two seasons, Reedley has posted a 20-2 record with their 6-1, 205-pound, dual-threat maturing as a quarterback along the way. Hickson ended his sophomore season completing 115 of 173 passes for 1,546 yards with 20 touchdowns against just three interceptions while posting five rushing scores. His progress on the field has been missed on largely by next level programs. An offer has come in from Lincoln (PA) with interest coming from Kansas Wesleyan and South Dakota Mine and Technology (The Rockers).

In an RNG exclusive interview partnered with QB Hit List, I sat down with the three-star recruit ahead of his May graduation date for an in-depth look at his skills on the field.

Armon, you had a breakout season in 2019 with Reedley College helping guide the team to a 10-1 record. What was working so well for the team on offense leading to the big season?

“One thing was us playing together as a team. Over our first three games, we were a young team after having a lot of sophomores last year; a bunch of us had to step up. We knew we had to get better on offense. We had early miscues, points left on the board, but for the most part we played together well throughout the season and it worked out in our favor.”

What style of offense were you running under head coach Eric Marty?

“A Spread. We had some RPO (run-pass option) looks and play-action.”

How did the offense fit your skills?

“It fits me because I feel like I can do anything. I can run, pass, and throw on the run. My decision-making fits the offense and calling the protections. It is the mental and physical side of football. It fits me both ways.”

Which routes were you throwing to last season?

“Slants, curls, hitches, go-routes, basically the whole route tree. We had the ability to do anything with our receiver corps.”

On the other side of the line of scrimmage, what were some of the different styles of defenses you were going against?

“We were getting different looks; all that you can think of. We were mainly seeing two-high and Cover 1. You can tell when they are going to blitz. It was not the hardest to pick up. It was easy for me to read.”

Going against those defenses, what is your pre-snap ritual?

“Making sure I have the protection right for the line, let everyone settle, let the defense move around, get the protection out, and then we are ready.”

In your words, how do you feel the 2019 season went for you personally?

“It was good. I feel like coming back from last season as a backup, I had a lot to learn. My body started to mature and get better. It started good and ended well.”

At the end of your sophomore season, what did you feel were the strengths to your overall game?

“My decision-making, my arm talent, and my mobility.”

What separates you from other Class of 2020 quarterbacks out there?

“What separates me is my overall ability. I make good decisions, I spread the ball around, and I know my abilities. I know I can make any pass. I am a winner. We’ve been 20-2 since I have been here. I have two rings now; I am proud to say.”

Since the season ended, what have you been working on with your game to stay sharp?

“Footwork, focused on that, and being in the weight room.”

Armon, it was great covering ground with you today. Wishing you success on the recruiting trail going forward.