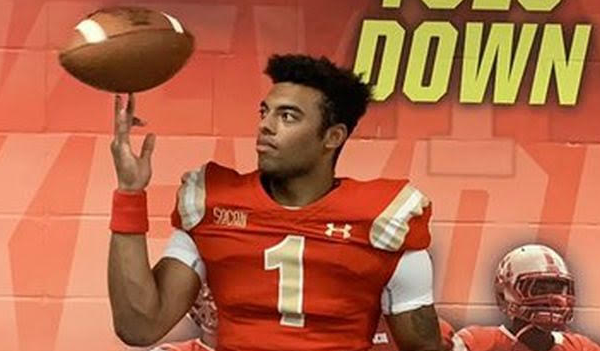 When the 2019 season end for Pope John Paul II High School, Class of 2020 dual-threat quarterback Kamal Gray had left it all on the field. He helped push the Panthers to a 10-3 record against 3A Pennsylvania opposition earning first team All-Area and All-Conference honors along the way. Now the focus is on recruiting for the three-star prospect with official visits on the schedule.

Gray’s senior season was special beyond the post-season accolades. The 5-11, 182-pound, field general worked his magic completing 184 of 312 passes for 2,744 yards with 38 touchdowns while rushing 81 times for 621 yards with seven trips into the end zone. Seeing Gray run the Spread has brought in college offers from VMI and Valparaiso with Division-II programs like Westchester showing interest.

What Gray brings to the field as an athlete and leader shows on reel and in the win-loss column. What does not show up is his character and academic success. Gray is carrying a 3.3 cumulative GPA and scored a 1240 on the SAT. Additionally, Gray works part-time at a local car dealership giving insight to how hard he will work to get what he wants.

For an update on his senior season and options with recruiting, I sat down with Gray partnered with QB Hit List for an in-depth conversation.

Kamal, you put up an impressive stat line during the 2019 season leading your team into the playoffs. What was working for you and your teammates during the season to put up a 10-win season?

“It was us staying on the same page. For me, it was understanding how my receivers were making cuts and what was opening up in the games.”

On offense, the team laid it on the opposition posting an average of 38 per outing. What did you do during the week to prepare for a given game that allowed for all the high scores?

“I watched a lot of film. We knew when we could score on teams. We went through the week with a lot of reps and did things until they were perfected.”

What is the base offense you ran with the Panthers?

“We ran a Spread with a lot of RPOs (run-pass option).”

How does the offense fit your skills?

“The offense fits perfectly. In every game we played, the coaches put the game plan together off of what I was capable of doing.”

Which areas of your game showed the most improvement?

“This year I was trying not to force balls. I understood if a man was covered not to throw it and put too much trust in my arm.”

When did everything come together for you in a top performance effort?

“My best performance was probably the first game of the season against Roman Catholic. I had six touchdowns and I threw for 430 yards.”

That is a fantastic game. All players face some sort of adversity during the season or against a certain team. What was a challenge you faced and overcame in 2019?

“My biggest obstacle was in the championship game against Neumann-Goretti. They are full of D-I athletes. They gave us a hard time. That was not my best game statistically, but I used my legs to score two touchdowns and at the end of the game one of my receivers got open – we got the win.”

How did the challenge going up against Neumann-Goretti make you a better quarterback?

“That game showed my mental toughness. I did not get frustrated when things were not going our way and I kept my composure.”

After all the game experience and reps, what do you feel are the strengths to your game as a quarterback?

“A strength is knowing my teammates and what they can do. My other strengths are my arm and my legs. Both are threats against defenses.”

Correct me if I am wrong, but I have you with two offers from VMI and Valparaiso?

“I am receiving interest from a bunch of D-II programs.”

Did you take any game day visits during the season?

“Yes. I took an unofficial visit to Valpo.”

Tell me about the Valpo visit. How did it go?

“It went well. I enjoyed myself on campus. It was a game day visit. We toured the campus, they explained dorm life, I met the coaches, and watched the game. It was a really good experience.”

Coming up, are you planning on taking any other visits?

What did you score on the ACT and/or SAT?

Nice. I’m catching up with you today after you go off work. It is commendable that you are keeping your grades up, playing sports, and also working part-time. Where are you working and what kind of job do you have?

“I work at a car dealership. I take cars to the lot and put them on display for all the customers.”

About how many hours per week are you working?

Kamal, given how busy you are, I truly appreciate your time today and wish you success with your upcoming official visits.