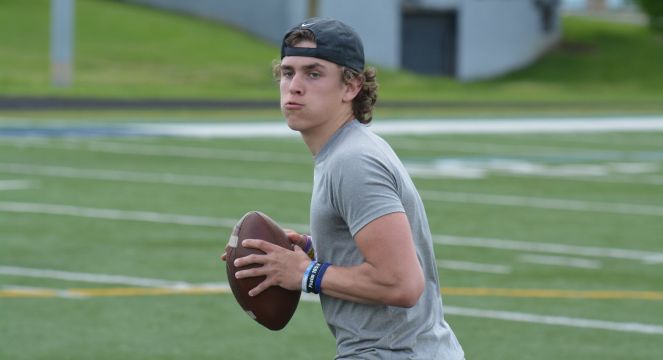 Each step along the way, each rep in practice and each snap in a game is building momentum for three-star quarterback Tommy Rittenhouse. The Class of 2021 quarterback threw for 1,424 yards with 24 touchdowns and rushed for two more as a sophomore and then earned Metro Suburban Offensive MVP honors in 2019 after covering 1,967 yards in the air with 24 scores while rushing for 493 yards with five individual trips across the goal line. The 6-0, 180-pound, St. Francis dual-threat has caught the eye of college programs with six offers dropped and more ready to see him in action once the lights turn on this fall.

In an RNG first-look interview partnered with QB Hit List, Rittenhouse takes us inside the Spartans’ up-temp Spread offense that led to all the postseason honors and a 10-2 run on the field against 4A Illinois competition.

Tommy, you were airing it out last season with the Spartans earning Conference Offensive MVP honors for the hard work. What was clicking for you as a quarterback allowing for the successful season?

“One of the biggest things was playing varsity as a sophomore. Getting that year under my belt and learning the offense, we came back with the same goal and the same offense with a lot of returning starters. I developed a good chemistry with all my receivers and with my offensive coordinator. Clicking with them made the season what it was putting up those big numbers.”

What style of offense were you executing last season?

“It was Spread and a lot of RPO. We were fast-paced, up-tempo, and no huddle calling the play out on the line. We were seeing and taking what the defense was giving us.”

How were defenses trying to cover your receivers and what were the defensive fronts throwing at you trying to get you off your game?

“At the beginning of the season we were seeing Cover 2 with a four-man rush, and lots of blitzes. I was able to identify that and adjust to that. Later in the season, around Week 5 or 6, teams changed to a loaded coverage. They were dropping eight and rushing three. That was challenging because how much we threw. That is when my run game stepped in. The windows got a lot tighter against a loaded coverage.”

You have that kind of arm that you can put it on a line 35 to 40 yards and you can make that off-platform throw scrambling to your left. How have you worked on your arm strength to be able to make those throws?

“It really comes from lifting and training with my QB coach, Greg Holcomb. We work a lot on off-platform throws. Everyone can do a three-step slant but in a game, with guys rushing at you two times your size, you have to get out of the pocket and make plays. I worked a lot on that in the offseason.”

As you just mentioned, the ability to beat a defense with your legs took off in 2019 ending the year as the team’s second leading rusher. How did that part of your game develop during your junior run?

“The biggest things after my sophomore season for me to work on was getting bigger, faster, and stronger. I worked a lot on my speed; now I am one of the fastest on the team. That was big for me last season and helped my confidence knowing I am able to run past any of these defenses. When I needed to, I could get out of the pocket and pick up yards.”

Will you be doing anything differently within the Spartans’ offense this year?

“Can’t say too much, but we are doing a lot of the same Spread offense and RPO stuff that will be up-tempo and going from there. This is my third year in the offense, I feel more confident with it.”

When the season ended, what were some of the areas of your skillset that you targeted to improve upon before your senior season?

“Putting on weight, getting stronger and faster, and improving my arm strength. Another area that I have put a lot of time into was reading coverages. Towards the end of the season, dropping into the loaded coverage with eight back, it was hard to adjust. I have watched countless hours of film to see what the defenses were doing and where to attack that this season.”

We talked about your focus and what you are working on, what is your workout routine?

“I lift about four to five times a week and throw two to three times. With my workouts, I mix and match. On Monday, Wednesday, and Friday, I do legs and on Tuesday and Thursday, I work my arms. When I work with my QB coach, I am not overdoing it.”

As your speed has increased at that has become a big part of your game, have you been able post a 40-yard time this offseason?

Nice. Let’s cover some ground on recruiting. Which schools are showing interest?

“Western Kentucky and Ball State – got a letter from them; they are a couple of schools that I just started talking to. I am also in touch with some schools that cannot offer scholarships as well.”

How many offers do ya got?

Going back to September of last year, have you taken any unofficial visits?

“Yes, sir. I have been to Illinois State for a game day in October, Iowa State in October, over the winter a couple of schools came to see me throw, I went to a Northern Illinois Junior Day, and I was supposed to go to more Junior Days but they were shut down because of the virus.”

Which schools were you supposed to see?

“Northwestern and some Ivy League – Harvard, Cornell, and Yale.”

When the opportunity presents itself, are there any planned trips ahead?

“Definitely. I want to see the schools that have offered and Illinois State again, Northern Iowa, Grand Valley State, Missouri State, and Western Illinois. Wherever I can get to this fall, I want to go to see what is best for me.”

The goal each offseason for every football player at each level is to improve as much as possible in all aspects of the game. Over the next couple of summer months, what will be the focus for you on expanding your knowledge of the game and how will you go about accomplishing that goal?

“The biggest thing for me is putting on as much size as I can, strength and speed. Another big thing is dissecting every game from this past season, what I did right and wrong. We will play a lot of the same teams. I am studying their tendencies and weak spots, watching as much film as I can to see what the teams will be focusing on with me. They will adjust and so will we. I will keep working on our offense and what we do best and go from there.”

Tommy, thanks for your time today and good luck with your summer practices.