Interview: 3-Star 2021 Los Angeles QB Cole Lourd Slaying it on the Field and in the Classroom 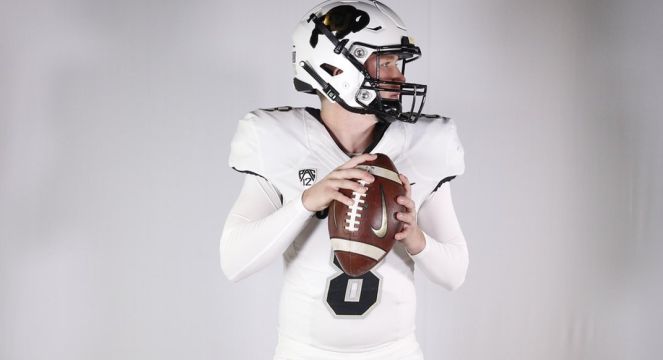 When it comes to the recruiting check list, Class of 2021 quarterback Cole Lourd is hitting all the right requirements and in abundance. The 6-2, 200-pound, rifleman has been slinging the rock for Brentwood High School for years impressing college coaches along the way pushing his offer total to 11. With potential college camps lined up and a big senior season ahead, the three-star recruit should see a flood of interest and offers in the coming months as recruiting heats up.

Offensive coordinators who may worry about their quarterback grasping the concepts of the scheme, there are no worries with Lourd. The Los Angeles native carries a 3.15 cumulative GPA with honors and scored a first attempt 29 on the ACT. The knowledge translates onto the field in the Eagles’ offense. During his sophomore season, Lourd threw for 2,299 yards with 25 touchdowns adding 145 rush yards to the stat sheet. His junior campaign ended with All-CIF and first team All-Gold Coast League honors after covering 3,100 yards with 32 touchdowns while furthering his dual-threat abilities rushing for 213 with six trips into the end zone.

In a return visit to the RNG Lab partnered with QB Hit List, Lourd breaks down his growth on the field in 2019 and recruiting process along the trail.

Cole, how did the 2019 season go for you with Brentwood?

“It went great, nothing to complain about. We had a good year with some tough losses. In our first loss against Fillmore, we had some two-way starters go down. We had some sophomores thrown into the fire. We were working with a lot of players that had not played yet and going through that learning curve. In the Palisades game, that was a close game. I am happy with how we played. It went down to the last minute. There are some plays I want back from that one.

“We lost to Oak Park during the fires. For the season, we were 7-3. We weren’t sure about the playoffs because we are in a five-team league. They gave us an at-large bid, we played John Muir. They have some really talented players. We balled hard but could not put it together. We are excited for next year.”

You’ve been slinging the pigskin around the California yards for a while now. How are you settling in with the role of leading a team as a veteran on the field?

“As a sophomore, I did a good job. Then, I did what was needed but lacked that leadership role. This year, I got to do more leading. I felt that I did a good job as a team captain. Being the QB you need to be a leader and a dude that steps up to keep the team in check. Being a senior, and with some other seniors, we’ve been playing together since seventh grade, we get to be the guys that sets the standard. We are the ones to help others through the process of school and football. Being a good teammate, I am helping others when I can. There may be some that have suggestions but are afraid to say anything. I want to be there to listen to them creating a good relationship with everyone on the team. We need to sustain the momentum from last year.”

How were you preparing for each game last season during the week?

“Watching film on my own, taking notes of coverages, and knowing what that offense was bringing that week. My coaches did a great job helping with that and with the game plan. There were a few times the OC and I would watch film during practice. We would go over how the game would be called, how we were going to attack, the plays I thought would work, and how we could be successful. Collaboration is big with our offense. Our head coach and I have a great relationship. He trusts me to make checks and give feedback on the sidelines.”

Where are you with your knowledge and understanding of the game after another year of experience? When you get the game plan and scout the opposing team, is it all flowing where it feels easy?

“It has been good with my understanding. I did better my junior year seeing coverages and knowing where I want to go with the ball. That is something I am honing in on even more this offseason. That is an area where I can get better. I have my check list with my eyes, going from seeing it on film and on the field. There are things I am doing now that I know I can’t get away with in college. Knowing coverages and knowing what the defense will bring helps me a lot.”

What style of offense will the Eagles run in 2020?

“A Spread, a west coast spread. Our offense is based around our personnel. I have a good understanding of our offense; I may run me more this year. That will create a little more variability in what we do. It will give a different look to defenses. We didn’t have much of a rushing game last year. The option of me running will help us more.”

Once the season gets going, what routes will you be throwing to within the scheme?

“We like to throw a lot of ins, slants – a lot of basic concepts, posts, comebacks – the whole route tree. If we see something in film that we think we can get in a game, we’ll put that in the game plan to change things up.”

How have you been preparing for your senior year this offseason with your technique?

“Working a lot with my QB coach keeping my mechanics clean. I am working on the mental part of the game to stay ready. A few coaches came by in January during the contact period. Due to the virus, I am staying ready to get back on campus for visits or camps. I am staying ready for when my opportunity comes again.”

You just mentioned competing at camps, which camps are you eyeing this summer?

“I will find a list of schools that are showing the most amount of interest that will be a good fit for me. Liberty, they have offered. Hugh Freeze is there. His experience from Ole Miss, that speaks for itself. I might be able to compete early there. Western Kentucky is a recent offer. Coach Ellis, offered me. He used to be at USC a few years back. They seem to want me as well.

“I want to go somewhere they want me. Ole Miss as well, they have offered me. I want to throw for them in Oxford; I am excited for that. Columbia and Brown are possibilities as well. I want to check out the Ivy education and their pitch. That education would set me up for life. That opens up a lot of doors.

“Northern Arizona offered me. They will throw it around a bunch. Northern Arizona is one of those places where I could compete early, produce, and have a great career there. Middle Tennessee offered me. Coach Franklin, their offensive coordinator, he’s a great dude. I have a lot of respect for him. He coached Jared Goff at Cal. He could prepare me for the next level. I think I could be a great fit for college down there.”

Which schools are showing interest?

“Oregon State is showing a good deal of interest, LSU, Arizona, and Yale.”

*Youngstown State offered after this interview

Going back over the last few months, have you visited any programs?

Tell me about the Colorado visit. How did that go?

“It went great. I loved being there with the snow and the outdoor feel. The landscape there is great. Colorado has a great campus and business school, that’s what I want to major in. Their campus and facilities were great. Some of the coaches I met on the trip are still there. Colorado has a special campus.”

And the UCLA visit?

“That was awesome. Growing up five minutes from campus, I know a lot about Westwood. I have been to a lot of UCLA basketball and football games. During that game, they showed a lot of offensive fight. They went down early but they came back. It was great to see the Rose Bowl from the field. It was cool to live out that dream from my childhood.”

Once things open back up, do you have any planned visits on the schedule separate from the camps?

“I am not sure of my summer plans. Everything is subject to change. Nothing is scheduled yet.”

Cole, I appreciate your time today and wish you success this offseason preparing for the camps and your senior season.