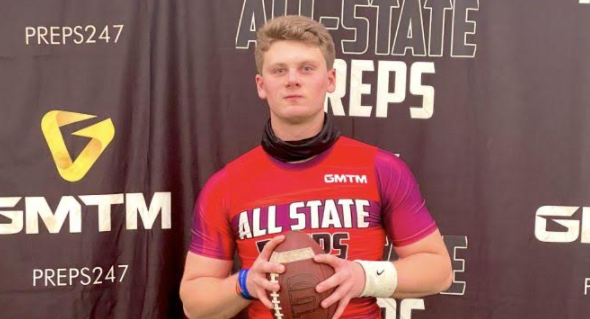 All high school players in the state of Connecticut are fired up for the 2021 season after being shutout in 2020. From the sounds of it, the excitement preparing for the upcoming season, and after MVP performances at several camps across the country, perhaps none are better prepared or more thrilled to play the game they love than Danny Lauter. Lauter got a two-game padded 11-on-11 club ball season in this spring, enough action to wet the whistle and take giant steps forward with his skillset. Once the 2021 season kicks off for Brunswick School, the 6-2.5, 212-pound, gunslinger will be working a Spread offense with college programs watching.

With an offer in-hand from Georgetown, the next step on Lauter’s football is journey is showcasing his skills in-person at college camps. Ahead of his camp circuit, Lauter stopped by the RNG Lab for a one-on-one interview partnered with QB Hit List.

Danny, let’s start off with a tough question. Due to the pandemic, what happened with the 2020 season in Connecticut?

In Connecticut we were always on edge debating on having a season. They decided not to have a season. We were one of three states that did not play in 2020 during the fall or spring. That hurt us as players.

No doubt. Did you guys get to play club ball or 11-on-11 padded football?

We decided to join a club league. We got that up and running with one week to prepare for our first game. It was hectic, but got it done. We got two games in before they shut it down. Those games helped us get some film but it wasn’t enough for college coaches.

What style of offense were you running?

We were a Spread offense. We like to throw the ball. Our new offensive coordinator came over from ST. Thomas More; he loves to throw the ball around. That fits my style of play really well.

With the two-games played, how did the season go for you?

It was alright. For me personally it really helped build me as a quarterback. It helped going against a live defense after not starting for two years. It helped me get a sense of what is going on. I felt like it was easy for me. We had great receivers which made it easy for me. I am grateful for those couple of games to help improve my play at quarterback.

With the Bruins, what style of offense will you guys execute in 2021?

We are still a Spread offense throwing it deep. We switched to a new league going against harder teams this season.

Within the offense, what are some of the routes you are connecting on with your receivers?

We love to throw what we call windows. It is like a 10-yard dig. With two-high safeties, the receiver finds an open hole. With one-high, the receiver runs through the zone. We also run posts, outs, and quick screens to keep the ball moving and keep defenses on their toes.

After the shutdown, did you guys get spring ball?

As a school, we are a private school, we are not allowed to do somethings like spring ball. We did have some practices to get to know each other and to get the feel for each other. It was helpful for our summer camp sessions.

This offseason, what have you been working on preparing for your senior year?

I have been working on is perfecting mechanics, my footwork, and switching my feet around to be more comfortable throwing. I try to get to a lot of camps. Twice a week a I have a quarterback class with a coach down in Georgia.

Are you working with a QB trainer?

What are you doing to increase your understanding of the game?

For me, I go and meet with my offensive coordinator. I hang out with him every day going over plays and I also do the QB class with Coach Hickson twice a week. It helps to keep talking football, watching film, and staying involved.

Have you been to any camps this offseason?

I won a FBU Gatorade MVP at their Miami camp and I also won the QB MVP at QB Universe in Phoenix. I just won, in March, the QB MVP at the U.S. National Team Combine and was selected to play on their international bowl team.

At any of the camps, have they had a long ball competition? If so, how far did you throw it?

Are you going to any college camps?

Yes. Rutgers reached out wanting me down. I plan on going to Vanderbilt and the Ivy League camps this year, but some of the Ivy League schools are allowed to have camps and some are not. There is a mega camp at SMU in Dallas I will be going to and one in Springfield (MA).

Are you taking any visits this summer?

Yes, I am taking a couple to the schools at the camps. This year has been a crazy year, I will focus on the schools I love. When I hit a camp, I will see the campus and see what they have to offer.

Danny, I appreciate your time today. Wishing you success at all the camps this summer.