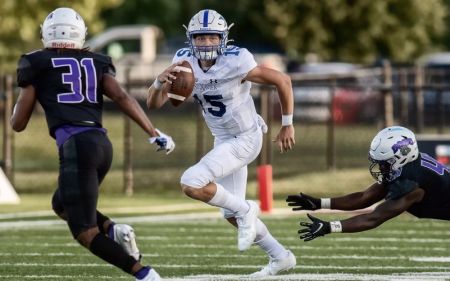 Brogan McCaughey was no ordinary first-year starter for St. Xavier. The 6-2, 200-pound, Class of 2022 talent got to spin it during his sophomore season as a backup compiling 679 yards on 59 completions for 10 touchdowns with 150 rush yards and two more scores at the Bombers made a two-game run into the Ohio 2019 playoffs. Taking over the reigns in 2020, McCaughey led his Cincinnati area squad into the record books.

As the Bombers were getting used to one another with a new roster while trying to overcome lapses in chemistry after COVID influenced practice time, a 2-2 start was had. Then the team went on an eight-game winning streak that culminated in hoisting a Division I Ohio trophy overhead. On the path to immortality, McCaughey dropped 2,708 yards and 29 touchdowns on the opposition in nine games earning first team All-State, All-GCL, All-City and All-District. Off the field, the three-star recruit has picked up five offers with college coaches across the country catching onto his strong arm and above the grain ability to read defenses.

Partnered with QB Hit List, McCaughey sat down for an RNG interview covering the championship season with insight on his talents spinning the pigskin.

Brogan, how sweet was it walking off the field in November with a state championship after downing Pickerington Central 44-3?

It was pretty surreal. No one expected us to win it all. For it to turn out like it did, and that was supposed to be the toughest game of the year for us… A week later it hit me. All the past years, all the great people that have played here. And there was Joe Burrow’s record that I almost hit. How fun and amazing an experience it was.

Not only were you dropping it into the breadbasket allowing your receivers to catch the pigskin in stride on go routes but you were also lacing them in tight windows along the hashmarks. At the line, what are your pre-snap reads allowing you to get the ball where it needs to go?

Specifically for that game, they had a very talented corner; I knew where he was at all times. And their safety, his brother, I knew where he was too. They had a good defensive line. The plan was to pick away at their weakest points. On that team, there was not too much to pick at. Jalen Patterson, he had four TDs. We were on it.

What was the offensive set and philosophy of the Bombers in 2020?

It changed a lot. At the beginning of the year it was what coach was putting down for us to do. Whatever he wanted we ran. Towards the end of the year, we had that trust. If there was a play that I wasn’t comfortable with, he wouldn’t run it. As the season went on, he catered to us. There were some games when we were 70 pass and 30 run. Other games we were 70 run and 30 pass. Everything was depending on the opponent. Our base through it all was out of the Spread.

What were some of the routes you were throwing to during the season?

In which game did you turn in your best performance?

If I had to pick, I am not sure. I’d say I really liked the Elder game, the second time in the playoffs. That was one of my top performances but I am not sure if it was my best. I am not sure on one specific game. In the St. Ignatius game, I broke a couple of records in that game.

Which records did you break?

I had 556 yards passing. I want to say I broke the record for pass attempts, pass completions, and total points were the records broken in that one. And that was just in three quarters. I was hurt in first drive of fourth quarter re-spraining my ankle

The Bombers took on two losses during the season, what was your leadership style keeping the team focused on going for a Division I Ohio state championship when things may have looked bleak?

After the first game (Brownsburg – IN), at the beginning teams are trying to find out who they are. We were down. We knew we had a tougher schedule ahead and wondering how will we win these other games. I was keeping the morale high, not letting them get distracted and getting them to shake off the loss on ESPN. The goal is trying to keep everyone focused. After all the COVID stuff we went through, we couldn’t give up. We had to make it worth it after all that we went through.

When the season finished, what did you feel were all the strengths to your game as a quarterback?

I’d say my pre-snap is something special. I have been told by experienced coaches that they have not seen that in a high school quarterback. My confidence is another. I was confident as a first-year starter during my junior year. I was confident in my throws with touch and muscling it in when I have to. My pre-snap reads, knowing what I will do with the ball, and what I will do if the play breaks down are strengths.

What have you focused on this offseason to prepare for your senior year?

Gaining weight in general and getting my speed up. Last year I did not get to show off my athleticism with a sprained ankle. Next year I hope to show my mobility more. I am always working on getting quicker with my drops. The quicker you get back, the quicker you can get the ball out. I am working on getting the ball out faster on my quick throws, on bubbles and slants.

Do you play any other sports for St. Xavier?

I do. I currently play hockey and I will run track. I have played baseball and basketball too.

I don’t get to ask this too often; how is your hockey season going?

It is as normal as possible. We’ve only missed four games. I am thankful for what we are getting.

How is the season going for you personally?

It is going good. A lot of people were shocked, a quarterback playing hockey, especially as a defenseman. Now I get to hit people. It is a lot more fun to hit than be hit.

And now turning to recruiting. Which schools are showing interest after the championship winning season?

How many scholarship offers have been given to you?

Brogan, it was great getting insight on the Bombers’ championship season and how your skills helped make it happen. Wishing you success with the rest of your hockey season until we talk again.